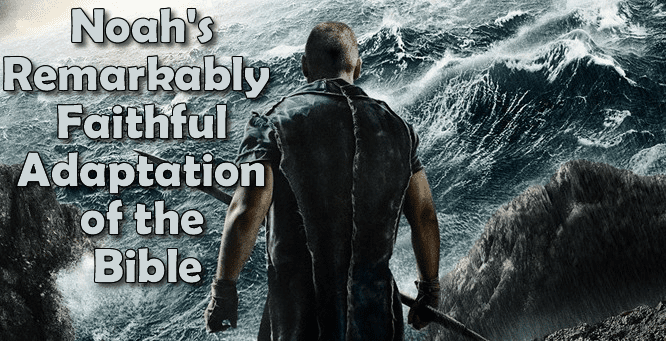 Last night I went and saw Noah, and I have to admit I was more than a little skeptical. The Story of Noah is one of the Bible stories that has fascinated, and dare I say, haunted me for my entire life. It is an incredible story that raises all the big questions about evil, God’s justice, violence, ecology, mercy and sacramentality.

I was skeptical because I have never seen the story adapted well by anyone.

Generally people adapt the story in one of two ways:

1) They white wash it and/or make it safe – in this way the dark themes and counter-cultural elements are ignored. The story ceases to challenge people, and you can walk away in roughly the same state you started in.

2) They abuse it – in this way the story is made to say something it never intended to say. The texts are misappropriated and the story becomes about something completely different then what the text seems to indicate.

This movie did neither of these things. There were some unexpected twists and turns, but I don’t think there was ever a moment when I felt they betrayed the either the message or the themes of the original story. This was a movie that was deeply faithful to the biblical material.

There wasn’t a single decision made that I felt was inconsistent with the biblical narrative. Each one showed a great deal of thought, reflection, and research into the reception tradition of the material as well as a very close  reading of the text. In fact I would argue that this movie is one of the most faithful adaption of the Bible I have ever seen. Here are the 5 reasons why (Warning Spoilers!!):

This movie helps to redefine the genre of Bible movies, and I think it does so in a powerful and provocative way.

March 25, 2014
10 Things That Should Shock You More Than World Vision's Recent Announcement (revised)
Next Post

March 30, 2014 Live: Dialog with 'Friendly Atheist' Hemant Mehta
Recent Comments
0 | Leave a Comment
Browse Our Archives
get the latest updates from
The Orant
and the Patheos
Catholic
Channel
POPULAR AT PATHEOS Catholic
1