Does the way Jesus died matter? 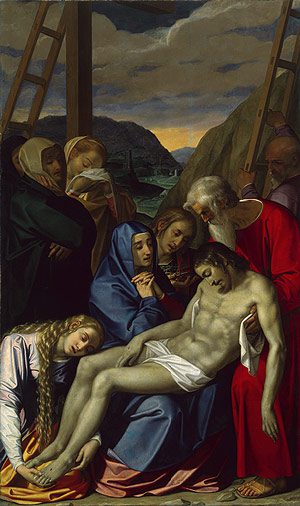 I think very few Christians would disagree with that statement. For nearly all believers, the death of Jesus is one the primary points upon which their theology turns. How one understands the death of Jesus underscores how we view God, salvation, human destiny, love and Christ himself.

This has certainly been true in my own life. In fact one of the primary reasons I became catholic is because of my own struggles answering the question, “why did Jesus die?”

However, in spite of the importance that many people put on the death of Jesus, for many Christians there has been little effort made into seeing how each of the four evangelists articulated Christ’s death differently in each of the four Gospels. Here are a few of the more significant variances:

–          Pilot washes his hands of Jesus death and the crowd utters that Jesus’ blood should be on their hands and on the hands of their children.

–          There is a mysterious dream that Pilate’s wife has, and she warns him to have nothing to do with Jesus

–          The wine offered to Jesus is mixed with myrrh (Matthew says it was mixed with gall, Luke and John don’t mention it)

–          Is the only one where Jesus wears a purple cloak (Matthew has a crimson robe; Luke and John don’t mention it).

–          Only in Luke does one of the robbers rebuke the other, and receive the promise of paradise

–          The centurion does not say Jesus was the son of God in this gospel, but instead says he is innocent.

–          Only in this gospel does Jesus talk to John and his mother, and give his mother into John’s care

–          Only here is the narrative about the dispute between Pilate and the Chief Priests  about Jesus being called “king of the Jews”  given.

Not only are there these significant valences in the count of Jesus death, but there are also major differences in the accounts of Jesus’ betrayal, trial, burial and resurrection.

I find these discrepancies fascinating.

They are a powerful reminder that Jesus death has been seen in different ways, even within the scriptures. When we think of the story it is important that we don’t simply conflate all the stories together. The common composite of all the elements removes each element of the story from its original narrative context.

I believe that the way Jesus died is very important, but I also believe that it is important to remember the different ways he died. We have four lenses in our Bibles that each see Jesus’ death differently. When we fail to read each gospel on it’s own terms we simply create a fifth gospel of our own devising, and that can be quite dangerous,

MY CHALLENGE TO YOU

Sit down and read through each of the four gospels straight through. You can do it in multiple sittings, but try to get through a whole gospel in a day so that you get the full force of what each evangelist is trying to do. I have done this a few times myself and have found it to be an incredible experience, and a powerful way to get to know Jesus better through the scriptures.

November 4, 2014
How to Vote for the Perfect Candidate, Every Time
Next Post

November 6, 2014 Quiz: The 5 Dimensional Political Compass
Recent Comments
0 | Leave a Comment
Browse Our Archives
get the latest updates from
The Orant
and the Patheos
Catholic
Channel
POPULAR AT PATHEOS Catholic
1

AppleTV+'s 'The Tragedy of Macbeth': Denzel Washington Is...
Streaming now on AppleTV+, writer/director Joel Coen's stark, atmospheric version of the...
view all Catholic blogs
What Are Your Thoughts?leave a comment
Copyright 2008-2021, Patheos. All rights reserved.