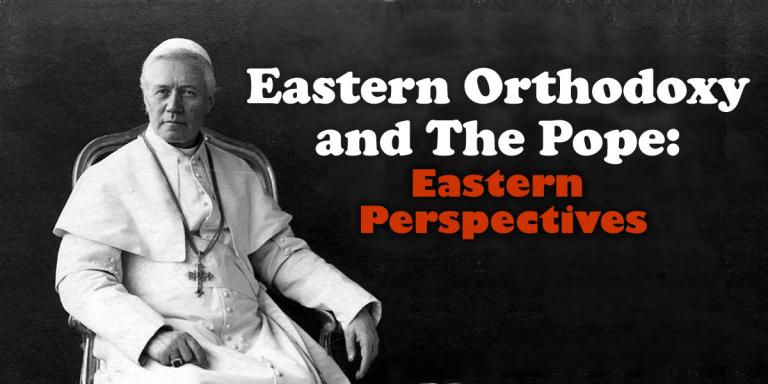 We recently began a series exploring the relationship between the Pope and the Eastern Orthodox Churches. In the first article I laid out a brief history of the relationship between the East and the Pope. In this entry I would like to turn my attention to contemporary Eastern Orthodox perspectives on the issue. Recent theologians in the Orthodox Church have offered substantial insights into paths for unity with the Catholic Church on the subject of the Papacy. Taking the time to examine the individual contributions of some Orthodox theologians in the contemporary context will help illuminate how the hurdles to unity might be overcome. Many thinkers have offered their own feelings in a spirit of great generosity. A complete overview of all perspectives would have been beyond the scope of this project, so I have included a few noteworthy examples of Orthodox perspectives.

Thomas Hopko is arguably the most candid among contemporary theologians in his vision for unity surrounding the issue of the Papacy. His paper “Roman Presidency and Christian Unity in our Time” presented at the 2005 Woodstock Forum, offers an open view of the situation as Hopko understands it.[1]  He offers a list of requirements, which he believes would be necessary for unity. The list is split up into three sections: 1)The need for the Pope to hold to the Orthodox Faith 2) The need for the Pope to exemplify proper Christian worship 3) The need for the reform of structural and administrative roles. The requirements of each of the following are summarized as follows.

The Orthodox faith necessitates that the Pope:[2]

The Orthodox worship necessitates that the Pope:[4]

The Orthodox administration necessitates that the Pope:[5]

Hopko believes that there are many facets involved in solving the issue of the papacy. The papacy is rooted in nearly all the significant issues which create stumbling blocks for unity. This list, if solved, would constitute the grounds for total unity between the Churches.  Hopko recognizes that the change must not be one sided. He states that the unity sought would require sacrifice by the Orthodox as well, stating:

“The Orthodox churches would surely have to undergo many humbling changes in attitude, structure and behavior to be in sacramental communion with the Roman church and to recognize its presidency among the churches in the person of its pope. The Orthodox would certainly have to overcome their own inner struggles over ecclesiastical power and privilege.  They would have to candidly admit their sinful contributions to Christian division and disunity, and to repent of them sincerely.  They would also have to forego all desires or demands for other churches to repent publicly of their past errors and sins, being willing to allow God to consign everything of the past to oblivion for the sake of bringing about the reconciliation and reunion of Christians at the present time. In a word, the Orthodox would have to sacrifice everything, excepting only the faith itself, for the sake of building a common future together with Christians who are willing and able to do so with them.[6]

Among the Eastern Orthodox commenters, Hopko’s path is the most complete, but also requires the greatest amount of work. His suggestions offer a striking portrait of the total picture of Orthodox grievances seen through the single issue of the Papacy. Unfortunately this list is so complete an uncompromising that it is difficult to determine what the first step toward reunion might be.

In direct response to Ut Unum Sint, Vigen Guroian contributed the paper to the conference, “Commitment to Ecumenism: An Ecumenical Dialogue of Ut Unum Sint” at the University of Aberdeenin 2005.[7] This paper posits that along with a better understanding of how the papacy functions in relationship with the other Churches in the world, Catholics must deepen their understanding of how other churches define themselves as Church.

Guroian underscores this by way of example in his own tradition. The Armenian Church has long honored the bishop of Rome as occupying a seat of first among equals in their liturgy. By deepening the understanding of the honor held for the Pope within traditions like the Armenian Church, the Catholic Church will be better able to articulate its role to those it seeks unity with.

This argument underscores the ways that the Catholic Church has sometimes created disunity in the mode through whichthey articulate their self-understanding to other Churches, not simply in the theological content of that articulation.  Guroian responds to John Paul II’s call for dialog with a “yes”, but wants to make sure it is on the right terms. If that is done there is he believes that objections will fade, and even an affirmative affirmation of the role of the Pope will emerge.

Guroian does stipulate that in spite of the shared honor that the Churches have for the Pope, there are still some significant hurdles to achieving full unity. He identifies, particularly, the “magisterial authority” of the papacy as it is exercised in statements made Ex Cathedra.[8] He recognizes that this would be a significant sacrifice for the West, and not one that guarantees reciprocation. It does however offer a first step.

`David Bentley Hart’s paper, “The Myth of Schism” seeks to explore what the fundamental issues are in the path toward union. To do so he takes on the issue of the papacy as one of the primary issues that needs to be dealt with. As a foil he evaluates the work done in Ut unum sint, believing it to offer at least a door to the kind of change in the Catholic Church’s perspective on the papacy that he believes would be necessary for union.[9]

He believes that the Ut unum sint was valuable and showed a degree of openness not before seen in the dialog. He calls it a “surprising” gesture, and acknowledges that it still has not been adequately responded to by the Orthodox.[10] In spite of this, he still sees that the issue of the papacy remains the primary issue dividing the East from the West. He believes that a path forward must be cut by distinguishing how the office of the patriarch has a distinct dignity from and jurisdictional authority. He sees that the papacy has suffered from a lack of clarification on this point and believes that by honing in on this issue the Church will be better able to articulate the primacy of Rome and the Patriarchate of  the West as distinct elements of the Papal office. In differentiating these Roles, the Catholic Church will better be able to understand the role of the other patriarchs.[11]

In response to a request by the Pontifical Council on Christian Unity, a number of Orthodox theologians contributed their voices to a symposium on the petrine ministry in Rome in 2003. Among those to respond was Théodore Stylianopoulos.[12] In his paper, he acknowledges that there is a primacy to the Roman papacy, but wants to ensure that that acknowledgment is couched upon two qualifications. That the papacy-as-primacy is limited in scope and nature; and that the papacy is adequately linked to apostolic succession.[13] He believes the basic concern from the Orthodox is that they want to know if Rome is able to talk about the primacy of the Bishop of Rome without reference to the ministry of Peter.[14]

Stylianopoulos highlights the inadequacy of the petrine texts in the scripture, by themselves, to substantiate the claims to Primacy that Rome currently enjoys.[15] There is certainly a scriptural “permanence” of Peter among the apostles in the New Testament, but that preeminence is never expressed in a power over the other apostles.[16] Stylianopoulos believes that a universal leader in the Church is something to be valued, and even promoted. This universal leader, however, is not a universal ruler. His power is manifested in love and service. The Pope must always hold his authority as shared and never turn to claims of status, rights, and jurisdiction.[17]

[1] Hopko, “Roman Presidency and Christian Unity in Our Time.”

[3] This is a reference to the debate over Palamism. According to Palamas, “man cannot participate in the unknowable essence of God; he can only participate in His energies which can, moreover, be experienced in the form of light This is the same uncreated light which was manifested to the Apostles at the Transfiguration of Christ, and can be seen by the saints during this life.” See:James Likoudis, Ending the Byzantine Greek Schism (New Rochelle, NY: Catholics United for the Faith, 1983), 19–21.

[7]Published in Vigen Guroian, “A Communion of Love and the Primacy of Peter: Reflections from the Armenian Church,” in Ecumenism Today: The Universal Church in the 21st Century, ed. Francesca Aran Murphy and Christopher Asprey (Burlington, VT: Ashgate Publishing, 2008), 139–150. summarized in DeVille, Orthodoxy and the Roman Papacy: Ut Unum Sint and the Prospects of East-West Unity, 38–39.

[8] Guroian, “A Communion of Love and the Primacy of Peter: Reflections from the Armenian Church,” 149.

[16] A question here is the meaning of the Greek verb poimaine usually translated as ‘tend’ in Jn 21:16.