Yesterday we continued to explore liturgy at the North American Academy of Liturgy. I’ve included some highlights from my seminar which is “Exploring Contemporary & Alternative Worship”

This is the third year Taylor Burton Edwards has presented on his work looking at the CCLI. This year we took some time to look at “shame.” I found it completely fascinating and very helpful. Here are some highlights from the presentation:

In session two of the “Exploring Contemporary & Alternative Worship Seminar” at #NAAL2020 we listened to Emily Snider Andrews talk about her research of Bethel. This time she is focusing on Ethics.

Field Trip to the King Center

At mid-day, the whole academy took a trip to the King Center and participated in mid-day prayer at Our Lady of Lourdes. I found the experience moving. We were able to visit King’s birth home as well as the Church where his Grandfather, Father and himself served. It was a palpable reminder of the call to ensure all people are given access to liturgy.

I was struck that within those walls, a modern prophet and martyr found his call and his voice. A potent reminder of the power a church can have to form people who use their gifting and calling for lives of significance and service.

Session three of the “Contemporary and Alternative” seminar began with Jim Marriott of  Concordia Seminary who offered us “Disrupting the Dichotomy: How Intercultural Music Changes the Contemporary/Traditional Conversation.”

He gives us a helpful background of the LCMS worship as a conservative liturgical body that has historically limited their engagement with music to traditional german hymns. Recently, however, the seminary has been receiving intercultural offerings through their sister seminaries in other countries.  For a while, they were splitting worship at chapel services into different themes. Sometimes it was traditional, sometimes contemporary, sometimes multi-ethnic.
This year they have abandoned “themed” chapel and are attempting to bring all the complexity of worship together.  He asks how to balance the inclusion of new cultures without falling into cultural appropriation. This challenge is difficult in the digital age. Most of the residential students are white, but there is an increasingly diverse community of distant education students.
Jim wants to ensure that the worshiping community gives an authentic space both to the students who show up physically as well as those who are present digitally. The challenge is authenticity. How can he lead students to worship with the necessary personal vulnerability?

The second Presentation in session three of the “Contemporary & Alternative” seminar was offered by Alydia Smith of United Church of Canada – She guided us through a new liturgical resource she coauthored entitled “Questioning Worship: Engaging All God’s People Worship.” The goal of the resources was to empower communities of faith to negotiate the complexities of intercultural worship.
It offers a great visual of how intercultural worship is differentiated from monocultural worship, multicultural worship; and cross-cultural worship. I’ve included the diagram here: 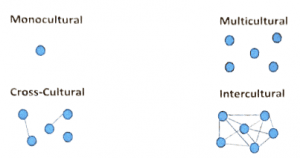 In short, in an intercultural setting, no one is left unchanged. Every culture impacts the others
We had a chance to use some of the resources ourselves; breaking into groups where we talked about our own worshiping communities. I recognized that in my own parish we’re a multi-cultural parish that is increasingly stepping into intercultural spaces.
To step into that space requires the deconstruction and unpacking of the white culture which has dominated the church in the west. This will be painful. It will be a death. It will require us to bear a cross. Thankfully we have a God that meets us at the cross.
Previous Post

A Look At The Watchtower aka...
The Pursuit of Holiness
Related posts from The Orant

Catholic
Loving beyond being "nice"
The Orant

Catholic
Oscar Romero and the International Day for the...
The Orant
TRENDING AT PATHEOS Catholic