“Many people spread their cloaks on the road,
and others spread leafy branches
that they had cut from the fields.
Those preceding him as well as those following kept crying out:
‘Hosanna!
Blessed is he who comes in the name of the Lord!
Blessed is the kingdom of our father David that is to come!
Hosanna in the highest!'” 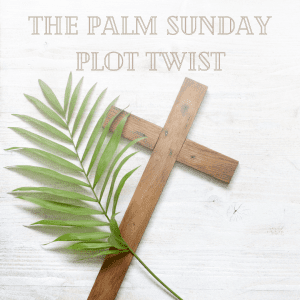 I love it when an author manages to tie a complex web of plot points together in a way I wasn’t expecting. Following the story of God is often marked with surprises and plot twists. One of the biggest ones can be seen in the passage today.

In the gospel story for Palm Sunday we see Jesus coming into Jerusalem with crowds of adoring fans crying out “Hosanna in the highest.” The phrase could be translated as “save us we pray.”

The people were desperate for help, and they thought they knew what they wanted. The way that people welcomed Jesus tells us something about the kind of rescue they sought. In the ancient world, kings and conquerors were welcomed by having palm branches strewn before them and waved in the air.

The people were hoping that Jesus would lead a political movement to overthrow the Romans. People had put their hope in the promises of God’s redemption and restoration, but translated what that would mean into the language that they knew – violence and conquest.

In the words of one of the ancient hymns of the church, he was going to “trample death by death.”

It’s natural to imagine God will solve the problems of our lives in the ways we expect. Yet, often God is weaving a story with some amazing plot twists that we can be a part of. When we try to author our life story the result tends to be a predictable melodrama. The more we open our lives to God, the more God is able to weave us into his masterpiece.

—————-
Question of the Day
– Would you rather have the starring role in your own novella or play a part in God’s heroic saga?