Each week, the Common Lectionary (used by most Protestants, the Orthodox and Rman Catholics), includes assigned readings for the coming Sunday, one each from:  the Torah books or the Prophets; a Psalm; a Gospel: the Book of Acts or an Epistle.  You may find the readings for this week at textweek.com.

Christians, Jews, Moslems, and Hindus all read portions of their sacred texts out loud in worship, for people to hear.  Then someone trained in understanding these texts, in fact ordained for that purpose, offers a commentary, usually with an exhortation included.

In the Christian and Jewish traditions the commentary, or sermon,  includes some story-telling, for the point is to connect the reading to the present-day life of the hearers.  The point is, those sacred texts have an eternal life, a vibrant usefulness for all places, seasons, eras.

In all these faiths the texts, which are huge, are read in small sections, called lections.  And there is a cycle of these readings. For Christians, the cycle lasts for three years.

Each Sunday has four assigned lections, from the Old Testament, from a Psalm, from an Epistle, and from the Gospel.

The Church Year is an ancient way of telling time. Rather than measuring time exclusively according to the natural seasons, Christians have traditionally measured time in their worship with a calendar built around the life of Christ. Some of the seasons of the Church Year date back to our earliest written records of Christian worship. The current form of the Christian calendar, including its colors, dates, and feasts, was firmly in place by the medieval period. Worship that is centered on the Church Year allows Christians to step into the life of Jesus. 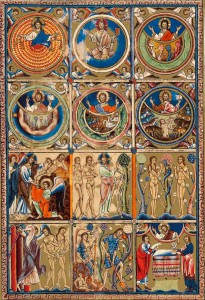 The church year begins on the First Sunday of Advent, which is usually the Sunday right after Thanksgiving.  Advent Sundays include texts that prophesy and tell about the birth of Jesus and the waiting and longing of the world.  After Advent a new season, called Epiphany (which means Showings) begins, and includes stories of times when the people saw something very special in Jesus (when the Magi came to the manger, and at his baptism, and at the wedding when the wine miracle occurred, etc.)  After Epiphany comes Lent, the journey toward Palm Sunday and Easter.  And then Eastertide, a joyful season of newness of life, moves toward Pentecost, which is the Holy Spirit’s Day.  And the rest of the year, which is half the year long, is the season of the Spirit’s fruitfulness, and includes stories everyone knows and loves, Noah, David, Solomon;  and the parables of the good life with God.

There are major Feast Days in all religions, and the texts prepare people for these celebrations.  For Christians, there are Feasts and Fasts in all the Seasons, and readings on those days stay the same in all years.  But for some Feasts, like Christmas, there are so many readings that, from year to year, they may vary, and increase our experience and wisdom.