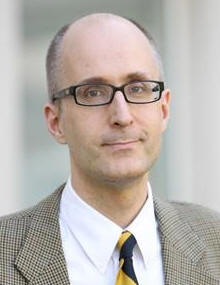 John Schmalzbauer is Associate Professor and Blanche Gorman Strong Chair in Protestant Studies in the Department of Religious Studies at Missouri State University.

His book People of Faith: Religious Conviction in American Journalism and Higher Education (Cornell University Press) explores the role of religion in the careers of 40 prominent journalists and academics. He is currently writing a book on the return of religion on campus with historian Kathleen Mahoney. He is also co-investigator on the National Study of Campus Ministries. This project uses survey data and ethnographic observations to study campus ministers in six denominations, 88 church-related colleges, and two parachurch groups.

He lives in Nixa, Missouri with his spouse Susan and three boys. He came to Missouri State University after six enjoyable years at the College of the Holy Cross, a Jesuit and Catholic liberal arts college. He is a graduate of Wheaton College in Illinois where he first got interested in the study of American evangelicals. A native of Minnesota, he am glad to be back in the heartland.