I loved Netflix Messiah. You might not if … by Brad Jersak

I have just finished binge-watching season 1 of the 10-episode Netflix series MESSIAH.

I loved it. You might not. [No big spoilers].

… you need the show to be about Jesus of Nazareth. Al-Masih (Arabic for Messiah), the main character, may or may not represent Jesus. He may be the Christ visiting our era … or he may be a false Messiah seeking to deceive. I liked how the show threw both the characters and the audience into the very question that eye-witnesses of Jesus were fighting over in the first century. The show doesn’t commit to solving the question. It’s about asking it. And so, we now have some Christians and Muslims who are deeply offended by the show. Why, exactly? Because it’s portraying the true Christ poorly? Or painting a false Christ as if true? These critics suffer the classic fundamentalist failure of imagination and misunderstand the place of good fiction as a delivery vehicle for truth.

… you need Al-Masih to reflect fourth-century creedal Christology. Does the show depict a self-revelation of the second person of the Trinity, at once both fully God and fully man? Had the first Christians come to those conclusions as Jesus of Nazareth walked about Galilee, Samaria and Judea? No, it took over 300 years of speculation, debate and councils to arrive at definitions that not all believers agreed on.

I liked how the show depicts those who encounter Al-Masih coming to a great breadth of conclusions, struggling to understand the meaning and identity of this man, just as we see during Jesus’ earthly sojourn.

… you need Al-Masih to be exclusively Christian. Ask yourself, is Jesus Christ exclusively Christian? And do all who claim to be Christian truly follow Jesus, if imitation has anything to do with it? How about Jewish? Jesus was a practicing Jew and nearly all his first-generation followers were Jews who saw him as the promise given to Abraham. Would you be offended if Muslims, too, recognized Jesus as Messiah (as so many have)? Would Jesus be more concerned about hardening the walls between Christians, Jews and Muslims … would he tear down those religiously enforced walls with other-centered love and radical peacemaking?

I like how Al-Masih confronts and transcends religious/sectarian divides and calls everyone to orient themselves to faith in God and love of neighbor.

… you need Al-Masih to adopt your religious forms. Whoever discovers Al-Masih, whether Christian, Jewish or Muslim, attempts to co-opt him for their agendas and squeeze him into their religious forms. Their zealous efforts to fashion a form around him become fanatical, ludicrous and even violent. By transcending these forms, he offends some of his most enthusiastic disciples and they abandon him.

I like how the show mirrors Jesus’ resistance to being pressed into a specific brand of Judaism and it reminds me of how Jesus told the woman at the well (John 4) that we’re beyond that—beyond exclusive specific mountains and temples. His Father wants worshipers who come in spirit and in truth.

… you need Al-Masih to be on your side politically. Al-Masih may offend American sentiments when he preaches in Washington D.C., challenging the liberty-crushing injustices that are the fruit of us-them nationalism and globalized militarism. As my friend Matt Atkins said to me, “Al Masih’s call for peace was heard as an act of war against those who couldn’t hear it. ‘The time for war is over!’ Yet those who are war-mongers will seek to kill those who call for peace.”

It reminds me of Joshua 5 where Joshua meets the Captain of the Lord of Hosts (i.e. a Christophany = appearance of Christ) and demands to know, “Are you on our side or theirs?” The Lord replies, “Neither,” and Joshua does an immediate face-plant. The lesson of Joshua is this: “Yes, I am with you. No, I am not on your side.” Or as Al-Masih says when confronted with the same question, “I walk with all men.”

… you need Al-Masih to justify vengeance and violence. Al-Masih only touches a firearm once in the series (not going spoil it). Eventually, he will challenge a national leader to forego all military might and withdraw his armies from a certain conflict (and in fact, globally).

The show presents us with a powerful thought experiment. If you were, for example, the President of the United States or the Russian Federation, what if Jesus himself came to your office on an official visit … and what if you not only believed it was truly Jesus AND you were a sincere and devout believer in Jesus (as both Presidents claim to be) … and what if Jesus told you that God wants you to stand down? What would you do?

I love how the show painted that possibility as a real dilemma for us to ponder … as did the prophet Isaiah, Jesus Christ and the Apostle Paul. “King of kings” and “Prince of Peace” must eventually mean something in any nation that calls itself “Christian.”

… you need Al-Masih to be white. The first full-length movie featuring an actual Jewish actor was The Shack (by Wm. Paul Young). Unbelievably, the producer received multiple complaints by Christians that the man playing Jesus was also a Jew (from Tel Aviv) … and worse, I suspect, they even pointed out that he wasn’t white!

In Messiah, the character is said to be born in Iran … but is equally adept in Arabic, Hebrew and English (or at least Texan). He is certainly a person of color. Moreover, the actor who plays him, Mehdi Debhi, is Belgian-born and ethnically rooted in Tunisia. He is identified on IMDb.com as Muslim.

Some may find this offensive, but bear in mind that the original Jesus-followers were all unequivocally people of color. So, I liked the casting choice very much. On a side note, dare I mention that in terms of age, he’s also a Millennial?

… you need Al-Masih to hate the people you hate. While he backs down from no one, it may annoy those activists on the left or right that our protagonist is not engaged in the culture wars of spectrum idolatry. He intends to burn them down—and not through coercion or tolerance, but through the most offensive demand possible. “Follow me.”

In that role, we find he loves all our favorite people to hate, whether that’s CIA agents, Israeli interrogators, Islamic Imams, New Age hippies or even Southern Baptists. He reaches out to a suicidal teen, a child with cancer, even a conspiratorial prostitute. Very Jesus-like in some ways. I like that the show challenged my prejudices in ways that Jesus has too.

… you need Al-Masih to fix everything and heal everyone. The series portrays those who become disillusioned when their supposed Messiah lets them down. When he saves some but not others. When he fails to set things right or make people well. Why doesn’t he just touch that person? Why does he act like a savior and then leave the job half-done? Why doesn’t he use all those God-given powers instead of sitting aloof while people struggle and suffer?

I personally found Al-Masih’s aloofness disappointing and unChristlike at times, if the Christ of the Gospels is our real plumbline of authentic Messiahship. But remember, it’s Netflix and we’re still wondering if this is a false Christ after all.

What’s so brilliant about this depiction is that it raises a real question we all ask (at least privately) about God’s apparent aloofness in a world permeated by suffering, disease and downright evil. Why doesn’t God just fix it? That’s an important meditation, not solved by the platitudes of apologists. At least Netflix knew this.

That’s a lot of reasons why you might not like the movie. I’ve just listed nine of them. What’s most challenging about the above critiques of the series is that these may be the very same reasons that religious and political ideologues, especially Christians, would reject Jesus and expel him from their systems. We now live in an era where a great swath of those who call themselves “Christian” deliberately reject the Jesus Way and his cruciform call to love, peace and forgiveness. With a thin veneer of Jesus-talk, Christendom at large has found Christ’s message (“I AM the message” says Al-Masih) either too much or too little, too naïve or too dangerous, too lenient or too tolerant, or just too “Jesusy.”

The New Testament calls this apostasy. Heresy is when you make a theological mistake about the nature of Christ. Maybe Netflix Messiah makes such mistakes. Forgivable, especially because it’s not an attempt at a fifth gospel or new creed about our Lord Jesus Christ. It’s a story.

Apostasy is another matter. It is a willful rejection of Jesus by those who once knew him. It can happen corporately or personally. The genius of Messiah is that it identifies both types. When an individual who has met Christ is so offended by him that they turn away, that’s apostasy. But on a larger scale, an entire movement may become apostate by expelling Jesus when they exchange his Way (prescribed in the red letters) for a new set of talking points. And there are so many competing gospels these days.

The series nailed this point exactly just as the major world religions are again complicit in driving international saber-rattling and frantically accelerating the doomsday clock. Through the show, I can hear the actual Christ clearly asking us, “Will you faithfully follow my Way or will you denounce me to join those many characters in the Gospels, the Netflix series and today’s world who conspire to rid themselves and their religions of the Cross-shaped yoke I call you to bear”?

January 5, 2020
Why the Father Didn't Seek the Prodigal (because he did) Brad Jersak
Next Post 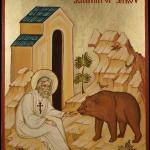 January 11, 2020 Why Christ came into the world – by Brad Jersak
Browse Our Archives
Related posts from Brad Jersak

Faith and Political Harm (Part 2 of 3)
Peasants could not imagine a world without feudalism. We find it difficult...
view all Progressive Christian blogs
Copyright 2008-2021, Patheos. All rights reserved.
Close Ad