In today’s modern Witchcraft, Familiars are often times thought of as being animal companions or pets. When asked if they have a Familiar, many Witches will often refer to their cat, dog, or other animal. Usually these pets have a predisposition towards Witchcraft, whether they’re always showing up at ritual time or just can’t seem to keep out of the Witchy supply cabinet. Yet, this seems to be a more modern conceptualization and I find that it presents a rather incomplete picture of Familiars.

I believe that there are, in actuality, really two types of Familiars. The first, is that which I have just described, an actual material creature. The second type, and that which will be the focus of this article, is the Familiar Spirit. As the name suggests, this type does not take an actual physical body but instead appears in spectral form. The form which the spirit takes is typically that of an animal (such as a cat, toad, rat, or crow) but it may also take human form as they did for Witches Alice Kyteler and Bessie Dunlop. There are many interpretations or theories as to what the Familiar spirit is exactly and Emma Wilby notes that traditionally Familiar Spirits were variously thought of as being imps, demons, fairies, angels, or even the Devil himself.*

According to folklore, there are a number of ways a Witch could obtain a Familiar. Probably the most prevalent method was the Witch being gifted a Familiar, usually by the Devil and typically after undergoing an initiatory experience. Other cases include Witches inheriting their Familiar from another individual, such as a family member. Elizabeth Francis, a Witch from Chelmsford, supposedly received a Familiar named Sathan from her grandmother and she in turn passed onto another Witch named Agnes Waterhouse.* In fact, according to some stories, a Witch had to successfully pass her Familiar on before she could die in peace. If the Familiar could not be given away properly, they supposedly hid in hedgerows waiting for a passing Witch to hopefully adopt them.* Additionally, there are cases of Familiars appearing of their own accord, such as the case of Essex Witch Joan Prentice who claimed that she was simply preparing herself for bed when her Familiar spontaneously appeared.* Regardless of the specific method, it is typically the Familiar that finds the Witch, not the other way around. That being said, I do believe there are certain ways to be proactive if one wishes to find a Familiar to work with.

The first step is to consider why you want a Familiar, what type of qualities would you like them to have, and what type of relationship do you want with them. For example, do you want a Familiar to act as a mentor or do you want them to be a servant to do your bidding? Once you have a clear idea, put your intentions out there and let it be known what you’re specifically looking for. One suggestion would be to petition your deity and ask them for help. The next step would be to spend time out in nature, dreaming, or journeying to the Otherworld. Keep your senses open as these are places where you will likely have your first communication with a Familiar Spirit. Once you are approached by a Spirit and begin conversing, it’s important to inform them what exactly you’re looking for in terms of the relationship and in turn ask for their own preferences. Some specific things of importance to discuss are:

If you find that you are compatible and the partnership is agreed upon, then you can move forward with the relationship building process. A word of caution though, it is absolutely vital that you maintain your end of the deal, especially in the beginning. If you agreed to give your Familiar a nightly offering or to communicate daily, you better do so. Failure to keep your word can end in them leaving or even retaliating against you. Eventually, the terms of agreement may be changed or revised but it’s important to be as consistent as possible.

Some Familiars will already have names but others may not and it will be up to you to name them. These names are usually odd and quite whimsical, historical examples include: Pyewacket, Vinegar Tom, Tyffin, Jarmara, Verdelet, Lightfoot, and Makeshift.* The name of your Familiar is extremely important and in my opinion should be kept a closely guarded secret. Sometimes Familiars will also have their own personal sigil which can be used to call on their power or summon them, this too should be kept private. In the wrong hands, this knowledge could be damaging to both you and your Familiar Spirit.

Depending on your Familiar’s preference, it’s also advisable to provide them some type of housing which gives them their own comfortable space to inhabit when not out and about. This could be anything from a jar, bottle, box, birdcage, a dollhouse, or even a skull. Furnish the house according to your Familiar’s desires but make sure to include objects that will entertain and fascinate them such as bells, colorful beads, knotted bits of string, and mirrors. Alternatively, you could create and altar or shrine to the Spirit and place these objects on and around it.

This has been a relatively brief explanation of Familiar Spirits and how to work with them. While there is a lot more that could be said, much of it would be specific to the individual Witch and their Familiar as each relationship and its dynamics are unique. In my own personal experience, my Familiar has proved to be an extremely helpful ally and friend. He first appeared to me while I was out in the woods one day, back when I was very young. He first took on the appearance of a man but would later take on the form of a Stag as well. We’ve worked together for many years now and throughout that time he has been my constant companion, teacher, helper, and guide. We often work collaboratively on spells and rituals, collectively joining our power. Additionally, he brings me information and news from afar, leads me through the Otherworld, provides me with counsel and advice when I need it, and teaches me new information and skills. As a partnership I will help him when need be and provide him with ample offerings (he is very fond of whiskey and communion bread from church).  The relationship we share is deeply meaningful and has had a tremendously positive impact on my path as a Witch.  Therefore, I encourage anyone who is interested to follow the steps I’ve listed and do their own personal exploration as working with a Familiar Spirit can be an amazingly powerful addition to one’s Craft.

* In order that they appear: 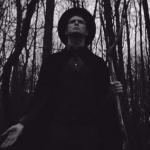 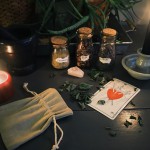 December 3, 2016 A Spell for the Broken Hearted
Recent Comments
0 | Leave a Comment
"I was approached by Wesley Chiu of Callisto Media to write a book for them ..."
Madame Pamita Suspicious Witchy Authors: My Final Thoughts
"Thank you to the people who felt compelled to correct my grammatical error. You really ..."
Kyuss Why Men Cannot be Witches
"For me, traditional witchcraft is the kind of witchy work I do and was passed ..."
Estigia Introduction to Traditional Witchcraft pt. 1
"You would also be great with anything written by Dana Corby - she is the ..."
JanetteNash Suspicious Witchy Authors: My Final Thoughts
Browse Our Archives
get the latest from
By Athame and Stang
Sign up for our newsletter
POPULAR AT PATHEOS Pagan
1

Hoodoo How We Do: Psalms Are...
Voodoo Universe
Related posts from By Athame and Stang