Last Spring, I was approached by my good friend Maggie of WitchandMoon and asked if I’d like to collaborate with her on an oracle deck. The proposed theme of this deck would be Traditional Witchcraft, with each card depicting a different concept taken from history and folklore. Being both a long time fan of Maggie’s artwork and incredibly intrigued by the idea of a Trad Craft oracle deck, I eagerly came aboard as the writer for this project. And now, almost a year later, we are close to a third of the way done designing The Traditional Witches’ Deck.

As the writer behind this oracle deck, my job has been to create the story behind each card. However, this process involves so much more than just simply coming up with explanations. From the start of this project, it’s been my goal for the book that accompanies these cards to be more than a collection of mere interpretations. Each card in this deck represents an important piece of Witch-lore and history, and thus I wanted the book to also be a source of interesting facts and stories.

To achieve this I begin by taking the concept for a card and exploring its place within history and folklore. I hunt for specific events or stories that capture the essence of whatever that particular card is depicting. I then begin to weave meaning out of the strands of information I’ve gathered. Once I have the basic framework for a card I utilize my own intuition as well as messages from the Spirits to flesh out possible interpretations.

The finished product is a combination of historical/folkloric information, card interpretation, and practical advice. Although, another goal of mine has been for this deck to be fluid in it’s interpretations, providing possible outcomes but leaving it open enough for users to make their own inferences. In a sense, these cards are about tapping into the living narrative of Witchcraft in order to gain inspiration and insight.

The following is a brief Q&A with Maggie regarding the artistic components of creating the Traditional Witches’ Deck.

Overall, what has your experience been like in creating the artwork for this oracle deck?

My experience creating the art for this deck has definitely been a challenging one. Each card  I create has had its own personality and has presented itself in its own individual way. The illustration process has been very much like tuning in to an old radio station. At first there’s a little bit of static, but then the image comes through very clearly. By the time the illustration is ready to be rendered I already have a very clear picture of how the painting will come together in its final form.

Can you say more about the specific artistic mediums you utilize in producing each card?

Each card is painted with black ink and watercolors. I use a wet on wet technique to achieve the smokey black background for each card. This way I’m able to establish a uniformed look for the deck without the monotony of a set background. The decision to stick to rich earth tones for the color was easy because of the nature of the tools and practices that are found in Traditional Witchcraft.

Are there any particular inspirations which influence your artwork?

I’m very inspired by the art of Kjersti Faret of CatCoven and by Adrienne Rozzi of Poison Apple Printshop. Simplistic but intentional line work has become my absolute favorite to create. The natural rawness of Traditional Witchcraft is also a big inspiration. Whenever I’m working on creating cards for the deck I become transported to dark pine groves and thick southern forests where I grew up. The spirit of these places helps to focus my mind and give me direction when I’m in the creative process.

What are your hopes for the Traditional Witches’ Deck?

I really hope that the Traditional Witches’ Deck can be an additional tool that Witches can add to their magical arsenal. The importance of each card standing alone and having its own history has been a big goal for the both of us. While the deck can be used as an oracle deck we also want the user to have the option of implementing the cards into their own spellwork for whatever needs that may be necessary. This way, if the Witch or Magician is lacking a certain tool or ingredient, they can simply put the deck to work for them.

For more information about The Traditional Witches’ Deck click here. 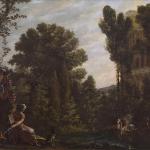 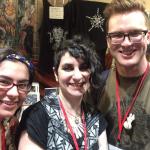 March 22, 2018 Paganicon 2018
Recent Comments
0 | Leave a Comment
"I was approached by Wesley Chiu of Callisto Media to write a book for them ..."
Madame Pamita Suspicious Witchy Authors: My Final Thoughts
"Thank you to the people who felt compelled to correct my grammatical error. You really ..."
Kyuss Why Men Cannot be Witches
"For me, traditional witchcraft is the kind of witchy work I do and was passed ..."
Estigia Introduction to Traditional Witchcraft pt. 1
"You would also be great with anything written by Dana Corby - she is the ..."
JanetteNash Suspicious Witchy Authors: My Final Thoughts
Browse Our Archives
get the latest from
By Athame and Stang
Sign up for our newsletter
POPULAR AT PATHEOS Pagan
1

The Cleansing Power of Salt Bowls:...
Starlight Witch
Related posts from By Athame and Stang

No, That's Not An Odal Rune
That's obviously not an Odal rune. It's a square stage set at...
view all Pagan blogs
What Are Your Thoughts?leave a comment
Copyright 2008-2020, Patheos. All rights reserved.