Within the world of Witchcraft, the topic of initiation can be quite contentious. Who can initiate who? Can one self-initiate? Is initiation even necessary to be a Witch? I would say that, by and large, initiation is more of a concern within Wiccan traditions than among practitioners of Traditional Witchcraft. Historically, Wicca has been an initiatory tradition – meaning that if you wanted to be of the Wica, you must be initiated. However, a trend in self-initiation started to grow during 1970’s as more material on Wiccan rituals became publicly available. Be that as it may, initiation is still a requirement for many traditions today – notably Gardnerian and Alexandrian Wicca. But what about initiation within Traditional Witchcraft? While perhaps not as outwardly apparent as those within Wicca, initiation rituals can be found within the practice of Traditional Witchcraft. As a practice that is heavily influenced by the history and folklore of Witchcraft, let us first turn to these sources to explore what inspires and informs the initiation rites of Traditional Craft.

During the Witch Trials, both European and American, a relatively clear narrative regarding initiation was developed. Suspected Witches confessed to engaging in a number of acts by which they obtained their power, which may have also influenced admittance into a coven. These acts, together forming the initiation rite, can be dived into three categories: renunciation, pact, and baptism. First, the initiate was required to renounce their Christian faith – either through verbally forsaking the Christian god or by physical actions such as trampling the cross. After cutting ties with their previous faith, the initiate would sign their pact with the Devil – typically by writing their name in his Black Book with their own blood (a common theme in the American Witch Trials). Finally, the initiate was given an infernal baptism. Many cases describe how the Devil physically marked the Witch by scratching them before sucking out a bit of their blood. The Devil would spit the blood into his hand and then sprinkle it over the initiate’s head while granting them with a new name. In certain instances, the initiation ritual concluded with sexual congress between the Witch and the Devil.

Moving forward in time, we can find countless methods of Witchcraft initiation recorded in folklore across the British Isles and America. In the Shetland Islands, a prospective Witch is required to go to the seashore at midnight on a full moon. Once there, the initiate must lie down upon the beach, below the flood-tide mark. The right hand is placed atop the head and the left under the soles of the feet. The initiate then promises everything between their hands to the Devil (this last piece can be found in the confessions of several suspected Scottish Witches). In the Orkney Islands, there is another seashore initiation rite, this time involving the use of seven stones. Again, the initiate must go a deserted beach at midnight on a full moon. The Witch lies down, with arms and legs stretched out forming a pentagram. Stones are placed at the hands, feet, and head. Two more are placed upon the chest, covering the heart. The initiate then speaks:

After lying still on the ground for some time, the initiate arises and throws each of the stones into the sea – speaking words of ill intent with each throw.

In Cornwall it was believed that the rocking stones (large stones finely balanced upon the ground or other stones, causing them to rock when pushed) had the ability to grant magical power. One recorded initiation ritual calls for the Witch to go at midnight on a full moon (sensing a pattern here?) and bathe in fresh spring water. Next, they must walk widdershins around the rocking stone nine times before climbing atop the stone and lying down outstretched. At this point, the initiate offers up their body and soul to the spirits that be. Once finished, they had to leave the stone by walking backwards seven paces and then bowing to the stone nine times and three times to the moon. Another initiation ritual form the West Country requires the would-be Witch to attend a church service in order to obtain a communion wafer, which they must hide under their tongue. Later on, the Witch must walk widdershins around the outside of the church 3 or 9 times. Once finished, it is said that either a toad or black dog will appear near the churchyard gate. The initiate is to feed the communion wafer to the creature which will then breathe upon them three times thus bestowing Witch power.

In American folklore, Witchcraft initiation rituals tend to be quite colorful. For example, one story entitled “The Devil, a Beetle, and the Bleeding Toe,” explains how the initiate has to dance in the woods for twelve nights. On the thirteenth night, the throat of a black hen must be slit and the blood sprayed upon a tree. This effectively conjured the Devil, who would appear and dance with the initiate before giving them their Witch’s mark. In another story, a man named Jonas became a Witch through a complex ritual involving several tools and gestures. First, in typical fashion, he had to renounce his Christian faith. Then, Jonas went about collecting the necessary ritual items: the left horn of a black ram, a silver bullet made from a coin stolen out of the church collection plate, and a new pewter plate. On a Friday the thirteenth, Jonas ventured to a spring which ran east and began his initiation by filling the ram’s horn with water from the spring. He then poured it upon the pewter plate, reciting the following incantation:

As I dip the water with a ram’s horn,
Cast me cruel with a heart of thorn,
As I now to the Devil my soul lease.
I also renounce Christ as my Savior,

And promise the Devil my behavior
‘Til my life on earth will cease.
May my black and evil soul be
Of Christian love and grace free
As this plate is of grease.
And effen I become an evil crone
From my outer skin to inner bone,
I’ll never given any Christian peace.

Jonas repeated this ritual for eight consecutive mornings. On the ninth day, he loaded a gun with the silver bullet and shot it at the rising sun. He had been told that if the sun appeared to be dripping blood, that the initiation had been a success.

Just as the initiation rites are varied within folklore, so too are the initiation rites of modern Traditional Witches. Similar to the specific initiation rituals of Wicca, certain Traditional Witchcraft groups or covens may have particular rituals which must be undergone in order to join their ranks. More often than not though, initiation is a solitary experience for Traditional Witches. Although, it should be noted that these experiences are only solitary in the sense of being without the presence of other living humans. Spirits are abound during these rituals as it is partially through them what we receive our power and to them that we make our oaths. The solitary Traditional Witch may follow a folkloric formula for initiation, such as any of those listed above. However, these rituals will more than likely need to be updated and contextualized for modern life (for example, smelting a silver bullet and shooting it at the sun may prove problematic for most). But in truth, not much more is needed other than a heartfelt pledge and perhaps a humble sacrifice – such as a few drops of the initiate’s own blood or a lock of hair. For the best results, make your oath in some lonely, liminal place (like a crossroads or a cemetery) during an auspicious time (for example, midnight on a full moon). Call out to the spirits with whom you work, ask them to bear witness to your rite and to lend you their virtues. Speak your words of intent, inform the world – both natural and Otherworldly – of your desire to dedicate yourself to the Craft. And in doing so, you open yourself to the mysteries of magic and Witchcraft. 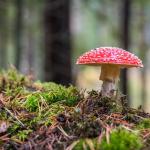 July 17, 2019
Of Witches And Faeries: A Brief Examination Of Working With the Fae
Next Post