Universalism, Then & Now: Insights from the Life of Orestes Brownson

Patrick Carey, a theology professor, who has written the best modern biography of Orestes Brownson (1803-187 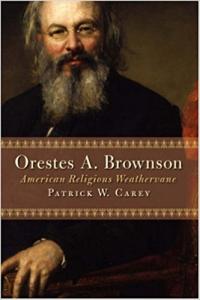 6), calls him, with affection, an “American Religious Weathervane” because his theological orientation changed so many times. More charitably, we might call Brownson a maverick. And in contrast to the many politicians who like to call themselves “mavericks”—but whose behavior is often more conformist than independent-minded—Brownson was a maverick to a head-spinning degree:

His sojourns included deep (if not always long lasting) immersions into Presbyterianism, Universalism, skepticism, Unitarianism, Transcendentalism, and Catholicism (viii). And while I will confess that I can sometimes be a bit theologically promiscuous, Brownson takes theological promiscuity to a whole other level. Although his life was a “restless search for balance between freedom and communion” (xii), and despite his many shifts in loyalties, he was not merely a dilettante sampling one option after another without any real commitment or thoughtfulness. Instead, Brownson was sincerely hardcore about each of his religious commitments in turn.

And we know a fair amount about him because he wrote—and published—a lot. There’s the seven-volume The Early Works of Orestes A. Brownson, which collects his writings up to 1844; the twenty-volume The Works of Orestes A. Brownson, which contains Brownson’s post-Catholic conversion publications; and the five-volume Orestes Brownson: Works in Political Philosophy. So for anyone considering a career as a Brownson scholar, think carefully about what you would be getting yourself into with primary sources alone!

His father’s family were Presbyterians, but his father died of pneumonia when Brownson was young (2). His mother’s parents were Universalists. Orestes and his twin sister Daphne were born in 1803, becoming the fourth and fifth children in the family (3). After the death of Brownson’s father, his mother, finding herself at age twenty-nine with five children under the age of eight, made the wrenching decision to send three of the children, including Orestes, to three different families to be cared for.

Orestes was about six years old when he was sent 17 miles north to live away from his birth family for more than seven years. One psychological reading of his life is that, “These youthful experiences of separation created in him a strong sense of personal independence, initiative, and self-reliance, but they also put him in a constant search for the communion, continuity, order, and stability that he did not” experience as a child (4).

Tracing the turning points in his life can feel a bit like whiplash:

One sacrifice is that despite how passionate and knowledgable he was about religion, since Brownson was married with children, his conversion meant that he could not serve as a member of the clergy within Catholicism (155). Nevertheless, Brownson maintained the zeal of a convert, and did not hold back in criticizing his former colleagues—just as he had criticized Catholicism (and other perspectives) during his sojourn within various versions of Protestantism.

Of course, some of his former colleagues returned the favor. In the book-length poem A Fable for Critics (1848), the Unitarian and poet James Russell Lowell included a stanza explicitly skewering Brownson:

He shifts quite about, then proceeds to expound

That ’tis merely the earth, not himself, that turns round,

And wishes it clearly impressed on your mind

That the weather[vane] rules and not follows the wind;

Proving first, then as deftly confuting each side,

With no doctrine pleased that’s not somewhere denied,

He lays the denier away on the shelf,

And then — down beside him lies gravely himself….

The worst of it is, that his logic’s so strong,

That of two sides he commonly chooses the wrong;

If there is only one, why, he’ll split it in two,

And first pummel this half, then that, black and blue.

That white’s white needs no proof, but it takes a deep fellow

To prove it jet-black, and that jet-black is yellow.

He offers the true faith to drink in a sieve, —

When it reaches your lips there’s naught left to believe…. (xiii-xiv)

No one has ever equalled Mr. Brownson in the ability with which he has [over time] refuted his own arguments. He has made the most elaborate and plausible plea for eclecticism, and [later] the most elaborate and plausible plea against it. He has said the best things for transcendentalism, and the best things against it…. He has satisfactorily shown the truth of socialism, and its necessity in order to bring about a golden age, and he has, by the most convincing arguments, demonstrated that the whole system is from the pit, and can lead to nothing but anarchy and ruin. (xiv-xv).

There is much more to say about Brownson, but given the outline we have explored of his major turning points, what lessons might there be for us today?

In reflecting on Brownson, the first quote that always comes to my mind is from Emerson’s 1841 essay “Self-Reliance”: “A foolish consistency is the hobgoblin of little minds.” Brownson was willing to risk “what he himself called a ‘glorious inconsistency’ that exhibited the mind’s flexibility and its openness to grow” in light of new information and insights (xv).

Brownson ultimately passed through Universalism—with its challenge to include ever-more beings within our circles of care and compassion—into a more narrow sectarianism. But for those of us who do remain within the big tent of Unitarian Universalism–or some related progressive tradition–the challenge of being a Universalist is leaning into what that word Universalism can mean at its best. In the words of the General Superintendent of the Universalists at the 1943 annual General Assembly:

Universalism cannot be limited either to Protestantism or to Christianity, not without denying its very name. Ours is a world fellowship, not just a Christian sect. For, so long as Universalism is universalism and not partialism, the fellowship bearing its name must succeed in making it unmistakably clear that all are welcome: theist and humanist, unitarian and trinitarian, colored and color-less. A circumscribed Universalism in unthinkable (Howe 109).

September 28, 2017
When to Not Tolerate Intolerance? Insights from the Jewish Tradition on Yom Kippur
Next Post

October 12, 2017 Cynic or Fool? How to Not "Go Low" When We Can’t Agree on Facts
Recent Comments
0 | Leave a Comment
"A Democracy IS a Dictatorship.You have many dictators instead of one.When withdrawing consent (IN THE ..."
crazysquirrel What Happens If We Withdraw Our ..."
"Thanks for this Carl! Perfect timing."
Allison “Fierce Self-Compassion”
"Whoever thought up the phrase "Defund the Police" should be run out of town on ..."
Michel What Does #DefundThePolice Really Mean? Awakening ..."
"All true, and there are a lot of stories which must be told...I only would ..."
Michel The Stories We Tell Matter: On ..."
Browse Our Archives
Related posts from Carl Gregg

The Quantum Mystery
"Although Kami cannot be seen, you are constantly walking within and through...