“History Teaches Us To Resist”

On the other side of Election Day, many systems of oppression remain in place, but there are also signs of movement and progress:

These a few of the many signs of hope and change this election season. 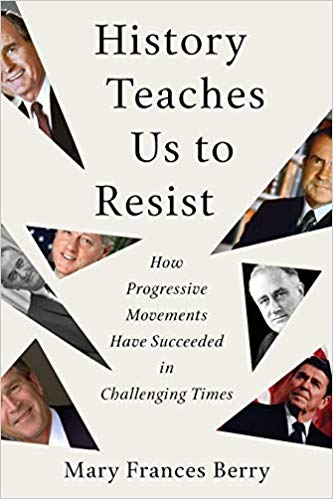 As part of my own processing, one of the books I have been reading is History Teaches Us to Resist: How Progressive Movements Have Succeeded in Challenging Times by Dr. Mary Frances Berry (Beacon Press, 2018). Dr. Berry is an African-American activist and historian, who currently serves as a professor of American Social Thought, History, and Africana Studies at the University of Pennsylvania, and one of the core themes in her work is that, “Each generation has the responsibility to make a dent in the wall of injustice.”

She emphasizes that from a historical perspective it is clear that no matter which politicians win a given election, there always remains work to be done (2). If your candidate loses, of course, the lesson that there remains work to be done is painfully clear. But even if your favorite candidate wins—the one who feels most in line with your values—history shows us such elected representatives need continuing advocacy and support to get actual legislation passed. Dr. Berry’s book traces movements for social progress over the past century through both conservative and liberal administrations. I will share a few examples in the hope that they can inspire our ongoing work for peace and justice.

First, as we progressive politicians talk about the need for a “New New Deal” or a “Green New Deal,” it may be instructive to look back on some of the lessons from the original New Deal under Franklin Delano Roosevelt (1882 – 1945). Note that from Berry’s perspective, we could make almost all the same points I am about to make with FDR in regard to, for instance, President Obama and the Dakota Access Pipeline. But looking back to FDR can help us take the long view—and to keep in mind that, “History doesn’t exactly repeat itself, but it does tend to rhyme.”

And so we remember that FDR was sworn in as the 32nd President of the United States in 1933, and he was in office more than a decade until his death in 1945, just 11 weeks into his fourth term as president. It is significant to note that FDR is the only U.S. President to serve for more than two terms. For anyone feeling alarmed, don’t worry: you can’t do that anymore! A few years after FDR’s death, we ratified the 22nd Amendment, which set a two-term limit on U.S. presidents. Prior to FDR, there had merely been a convention set by George Washington’s example that a president would not run for a third term. So perhaps our first takeaway is a reminder is that when presidents transgress important historic conventions, it is time to pass laws or amendments that prevent future such instances.

But I bring up FDR primarily because he is remembered as both a great president in general and as a progressive president in particular. Yet, history shows us that creating social change required more than merely electing a progressive politician. To consider the specific angle of racial justice, there were, on one hand, ways in which FDR was an ally: “After his 1936 reelection, FDR named the first black federal judge…. The president also officially denounced lynching and appeared publicly as comfortable with [everyone irrespective of race]”—which was significant at a time three decades before the end of Jim Crow Laws (7). On the other hand, one big ask from racial justice advocates at that time was for FDR “to issue an order ending defense-industry employment exclusion” (8).

Behind this demand for change was the African-American labor organizer A. Philip Randolph (1889 – 1979). After meeting in person with FDR in late September 1940, Randolph and his delegation were hopeful that FDR would be supportive of their request to desegregate the military. But although the president was sympathetic to their position, he was also courting the votes of white segregationists to support his election in November for a third term. And in October, the White House issued a statement reinforcing the standing policy of racial segregation in the military (11).

FDR was a progressive president but Randolph was nevertheless left to discern what to do next to force the president’s hand. And even though more people associate the March on Washington with The Rev. Dr. Martin Luther King, Jr.’s 1963 “I Have a Dream” speech, that protest owed its origins to an earlier March on Washington Movement that A. Philip Randolph coordinated two decades earlier. In late January 1941 he announced his intention to organize ten thousand African Americans which in his words “would wake up and shock official Washington as it had never been shocked before” (12).

It turns out, Randolph was right. A march was planned for July, but even the possibility of such a march was enough to spur FDR into action: an executive order was signed, and the march was canceled (16). Progress was made toward decreasing racial discrimination in Federal hiring practices, although it was not until Truman was president and the Korean War that enforcement of desegregation in the military finally began (17, 22).

There are quite a few different lessons here. One lesson is that although progress occasionally comes quickly, it more often arrives in fits and starts from activism over the course of many years. Another lesson is the need to vary our strategies. Randolph’s idea of a massive, one-day non-violent protest in D.C. was so innovative at the time that even the threat of doing it was enough to accomplish their stated goal. Sadly, politicians have become increasingly inoculated against massive protests, reminding us to continue to bring imagination and creativity to our actions for peace and justice.

To shift our focus forward a few decades, there is an enormous amount to say about social protest movements around the Vietnam War, but I will draw our attention to one story from my own tradition of Unitarian Universalism that has another significant lesson for us today. It can be easy to feel overwhelmed by politics, and when I feel that way, I try to keep in mind the wise advice of my seminary ethics professor who used to always ask us, “What is the next right thing to do within your spheres of influence?” It can be easy to think you don’t have much you can do, but if you pause to reflect, you can usually think of one next step to take: one person you can talk to, one letter you can write, or one action you can take. After that you make the next right move, and the next—and often unforeseen possibilities eventually present themselves.

The particular story I have in mind from the Vietnam Era is related to the event depicted in last year’s film The Post, starting Meryl Streep and Tom Hanks, about how The Washington Post published excerpts of the Pentagon Papers which contained classified details about the U.S. role in the Vietnam War. When no publisher could be found to publish the full text of the Pentagon Papers, Senator Mike Gravel, one of two Unitarian Universalists in the Senate at the time, asked the Unitarian Universalist Association’s own Beacon Press to take on this risk. They bravely did. Beacon Press couldn’t singlehandedly end the Vietnam War, but they did what they could within their sphere of influence by publishing the full Pentagon Papers.

It was the right thing to do. But there were serious consequences, as there were for many individual protesters and draft card burners during the war. In this case: “President Nixon personally attacked Beacon Press…and J. Edgar Hoover approved an FBI subpoena of the entire denomination’s bank records. Beacon Press and Senator Gravel lost their Supreme Court case, leaving the press vulnerable to persecution.” Ultimately, the Watergate break-in in June 1972 vindicated Beacon Press’s position, and the government harassment ended (26).

There are so many more examples from history to share, but I hope my basic point is clear that from FDR to Nixon—and every point beyond and in between—no matter what politicians win in a given election, we must continue to act individually and collectively to turn our dreams into deeds. 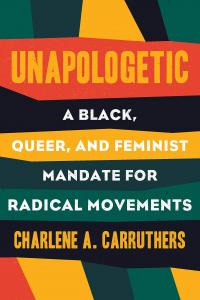 As I move toward my conclusion, I will also share with you that in the wake of the election, I have been reading one other book also published this year by Beacon Press titled Unapologetic: A Black, Queer, and Feminist Mandate for Radical Movements by the community organizer Charlene Carruthers. What interests me most about her work is her call—again, regardless of which politicians win any given election—to dream bigger about what it really means to work for collective liberation—“in which everyone gets free.”

What might it mean, for instance, to take seriously the insights of MLK and other peace activists that, “The ultimate weakness of violence is that it is a descending spiral begetting the very thing it seeks to destroy, instead of diminishing evil, it multiplies it.… Returning violence for violence multiplies violence, adding deeper darkness to a night already devoid of stars. Darkness cannot drive out darkness; only light can do that. Hate cannot drive out hate; only love can do that.” What, then, might it mean to try to find a better way that does not rely on violence?

Along those lines, Carruthers is one among many twenty-first century activists seeking alternatives to violence that offer us “safety and accountability without relying on alienation, punishment, or state or systematic violence, including incarceration or policing” (xi). No one is saying that the journey toward such a future will be easy or simple. But something like what Carruthers has in mind is implied by our UU 6th Principle of “The goal of world community with peace, liberty, and justice for all.” And a small but significant step toward such a future was taken on Tuesday, when “Florida voters approved an amendment to restore the right to vote for felons who have served their time.”

As my colleague The Rev. Elizabeth Stevens wrote in a powerful “post-election poem,” Collective liberation does not come as a “once-and-done, a single push—as an earthquake or tidal wave…. Justice does not emerge fully grown. But we are chipping away the mountains of injustice.” We will keep on moving forward, and I am grateful to be on that journey will so many of you.

November 30, 2018 “Privacy, Social Justice, & Survival in a Hyper-connected World"
Recent Comments
0 | Leave a Comment
Browse Our Archives
get the latest from
Carl Gregg
Sign up for our newsletter
POPULAR AT PATHEOS More Voices
1

More Voices
The Stories We Tell Matter: On the 100th...
Carl Gregg