My new book The Power of the Pips: Courting Numbers in Cartomancy will be out next month. There are three distinct qualities to it where the level of information is concerned: in your face, waxing poetic, and then philosophical.

Here’s an excerpt of an example of the latter. It comes from the chapter called ‘Wait for It,’ where I talk about the empire of the senses vs. emotions, obsolete but still valid sayings, and strange questions. Enjoy!

A cartomantic reading session with the full deck goes through four stages of recognizing what’s happening:

Intensity, arousal of curiosity (though this can also have sexual content), nonsense and silence, and repetition. On this list I particularly like the last two: When the reader establishes intensity through reference to basic curiosity, ‘nonsense’ takes over and articulates itself forcefully, yet paradoxically, through silence.

There’s always a moment in the reading session when both, the reader and the sitter can be baffled, so they ‘say’ nothing. Because silence is instituted, there is thus a need for the repetition of all the other movements. This repetition is what constitutes transgression.

The brilliant insight is that because transgression is what it is, a site of struggle and tension with language and ideas, it cannot per se also be the vehicle for communication as a result of precise readings (across and between the agents involved).

In other words, everybody misreads everybody else – but not entirely. That’s the beauty of cartomancy. A reader may estimate a sitter’s response quite accurately, but not because she is able to read her opponent with infallible precision – via classical cold reading or through the plain clarity of the cards – but because there is always a chance that she is wrong precisely and inasmuch as she is also right.

I like this idea, especially as it relates to an ethical question:

How much responsibility does the reader of cards have to show to their sitters? Here the correct answer must be this one: None.

Not a single nerve of responsibility must be shown, if waiting for the good thing to happen is to stand a chance of survival in its intense, ravishing, illuminating, and for the most part violent mode – violent in the sense that such a waiting act violates the most basic cultural expectation, which is to wait for dictations from above to know what is appropriate and what is not, instead of just knowing due to seeing things as they are, and as they unfold in the ever-mysterious NOW.

Tarot cards are sensorial triggers. The trumps make us aware of the order of things, and they give us a blueprint for how we can transgress such orders. The pip cards and the courts connect us to modalities of transgressing our inherent limits of being in the world.

You see the Ace of Spades. Now ask yourself without thinking of standard meanings: How many times was your sense of this card similar to this decision: ‘That’s it. Up until here, and no more’?

Here some would ask: ‘Wait, isn’t that the job of the 10 Swords, to make us realize that we’ve had it’? I would suggest that by the time we got to the 10 after the initial, ultimate decision was made, what we would say is this: ‘I did it. I have fully realized the big NO. I’m now connected to the full stops of my life.’ 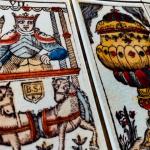 January 4, 2018
A short theory of the pip cards
Next Post 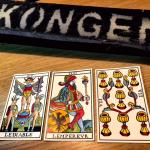 January 17, 2018 Fate or Flow?
Recent Comments
0 | Leave a Comment
Browse Our Archives
get the latest from
THE CARTOMANCER
Sign up for our newsletter
POPULAR AT PATHEOS Pagan
1

What Do We Teach the Children?...
John Beckett
Related posts from THE CARTOMANCER