WHEN YOU GET HANGED

WHEN YOU GET HANGED March 7, 2018 Camelia Elias

The Hanged Man is not about a different perspective.

First and foremost, the Hanged Man is about the inverse of the situation, calling us to consider events and their inverse manifestation.

Thinking of the inverse of any situation we’re presented with can teach us something about how to avoid nasty occurrences.

Such thinking used to be part of an old Stoic repertoire, with philosophers insisting that it’s good to develop a sense of detachment from your desire to achieve something, by always imagining the inverse of the situation.

For instance, if you want to climb to the very top of your profession, the practice is to also imagine while climbing what the situation would look like if you failed.

What would be the things you’d steer away from? Unless you can imagine the inverse of the success story, it’s not very likely that you can learn any tricks of avoidance.

Since the Stoics taught this tactic, it has been used to various degrees in other disciplines and settings, from military strategy and management to concepts such as ‘reverse psychology’.

Thinking of the inverse of the situation is also useful when you have to declare things such as: ‘Now they like you, now they don’t.’

In considering the motivations behind people’s change in attitude, if you don’t apply the inverse of the situation, you may be tempted to speculate on the ‘why’; ‘why don’t they like me anymore?’

But that is not the most useful when we’re dealing with entitlements: ‘Yesterday I loved you, today I’m entitled to hate you.’ Fair enough. ‘Be happy on your way. Be judicious. Don’t waste my time.’

What I find useful is to look at what lesson the Hanged Man teaches, namely, the lesson of acceptance often captured in this phrase: ‘It can’t be helped’.

Now, most would say that when a situation can’t be helped, what it discloses is resignation, the danger also being that with resignation comes resentment.

But if we looked at a situation and how it unfolds as a matter of flow, whether we like it or not, we realize that the only proper response to all of it is to say: ‘It can’t be helped.’

Try saying that to yourself, ‘It can’t be helped,’ next time someone hangs you, or you find yourself in an impossible situation. You’ll be surprised at your next step.

Mine begins with this realization:

‘It can’t be helped’ is the only condition for the existence of ‘keep going.’ 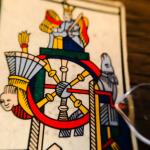 February 28, 2018
WHEN THE WHEEL OF FORTUNE IS NOT ABOUT YOUR 5-YEAR PLAN
Next Post 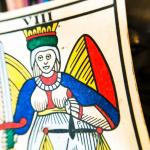 March 14, 2018 WHEN JUSTICE IS YOUR FULL STOP
Recent Comments
0 | Leave a Comment
Browse Our Archives
get the latest from
THE CARTOMANCER
Sign up for our newsletter
POPULAR AT PATHEOS Pagan
1

How Do I Know If A...
John Beckett
Related posts from THE CARTOMANCER