WHEN THE WHEEL OF FORTUNE IS NOT ABOUT YOUR 5-YEAR PLAN February 28, 2018 Camelia Elias

‘Where do you see yourself in five years?’

How about this answer: ‘In five years I’ll be exactly where I’ll be, in the same NOW I’m in right now.’

I don’t know about you, but I find this question about positioning your future self in some desired fantasy identity as one of the stupidest questions I can think of.

It’s even worse if it comes from people invested in the spiritual arts, especially the divinatory arts, such as cartomancy, astrology, and oracle readings.

We’re always there where we’re at. This happens as a matter of life happening as it happens. It may well be that, in hindsight, we can conclude that a self-prophesy has come to pass: ‘Yay, five years ago I said that I was going to be the curator of a museum, and here I am curating away’, but if this happens it will not be the result of your acting on your imagination. It will be the result of external conditions favoring your acting.

There’s no such thing. We’re always there where we’re at. Nothing more, nothing less. Hence it’s a fallacy to think that when the wheel of change turns, it places us right in the middle of our five-year plan.

The sages of old knew this, and therefore insisted that our only duty, if there’s a duty is to simply relax and pay attention to where we’re at right now.

What’s the purpose of adding to the regular life pressures the one of self-expectation? Identity games à la ‘how to manage your life so that it’s more productive and successful’ are the least interesting.

When we talk about having the power to act, we don’t talk about where you see yourself five years from now. We talk about your sense of momentum. How strong is it, how clear is it?

This week I talked about embodied attitudes that are visible in the public sphere, and I referred to mine as being resolute, ambitious, industrious, and indomitable.

‘Oh, wow’, somebody said, and then remarked with a sigh: ‘I wish I could be as precise about my own attitudes, as that would give me clarity in my decisions about the future and what to embody in terms of desired identity.’

I laughed, and I said: ‘It’s Saturn in Aries in the 11th house ruled by Mars in Virgo’. That’s what gives me this string of words.

‘Huh?’ the person said, and then I laughed some more. ‘Huh?’ was the appropriate response.

The thing is that we can all come up with a string of words that characterizes what we’re all about if we took the pains to observe ourselves for just five minutes.

Where do your thoughts bring you? To an imagined future aligned with the clever questions that management theories in vogue dictate are interesting?

Mine were all about swordsmen, fencing, warfare, and martial arts. What do I do now as a 50-year old? The same. I maintain the same spirit of fascination with brilliant war tacticians, diligent and skillful masters. I still read books about chivalry and Zen samurai.

Will being in the NOW be the result of my efforts? Not by a long shot.

I read the cards for the astonished person who wanted to know about his path. Three cards fell on the table:

I said: ‘Whichever road you take, it gets you exactly there where it gets you. You will know what that is when you’ll see it, because you’ll be right in the middle of it, recognizing it, if you cared to give yourself five minutes to observe it.’

I made an additional note as to the fascination with astrology. I said this: ‘If you want to hear that story, you don’t need a 50-page report. All you need is a sharp analyst who can relate the planet with the most power to act in your chart to the stuff you read when you were 12.’

What did you read when you were 12? What was your fascination with?

Try to answer this question for yourself, if you want to concretize your NOW in a more nuanced way.

Forget about imagining where you’ll be five years from now. Don’t waste your creative power searching for what is right under your nose. 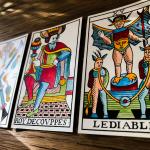 February 21, 2018
THREE STUNTS AND ONE BURN IN CARTOMANCY
Next Post 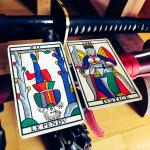 March 7, 2018 WHEN YOU GET HANGED
Recent Comments
0 | Leave a Comment
Browse Our Archives
get the latest from
THE CARTOMANCER
Sign up for our newsletter
POPULAR AT PATHEOS Pagan
1