WHEN THE TOWER IS A TAG: SUPPORTIVE OR COMPETITIVE

WHEN THE TOWER IS A TAG: SUPPORTIVE OR COMPETITIVE June 1, 2018 Camelia Elias

Not once, but several times people have complained that I was not being very supportive of their desires.

I have a problem with ‘supportive’ – not to mention desire – because I’m not sure what it means. Does it mean being ‘sympathetic’, ’emphatic’, ‘participating in healing and growth’, ‘validating’, ‘listening and nodding while my judgment is suspended’?

What do all these concepts and attitudes mean? Just the thought of it gives me a headache already.

You deliver clarity. People want support. You insist on clarity and people decide you’re not one of them, belonging to the ‘supportive’ community. They are right about that. You don’t belong to the supportive. You belong to clarity.

Here’s an example: I once performed a reading for a person who wanted to know whether it was the right time for her to teach others about herbalism.

This was pretty clear talk to me. In its clarity this talk was neither supportive nor non-supportive. It was what it was: it pointed towards making a realization.

Nonetheless, since this was not the ‘right’ answer, I got it thrown in my face that I was not being supportive and that I was messing with the person’s peace of mind. I also got blocked as a friend on Facebook, as if my virtual presence there was a contamination of this person’s life and goals. I don’t want to say that this behavior is new to me, as I’ve seen worse, but I see what motivates it.

The question is, is this really so?

People like to share their shattering and vulnerable stories because that makes them feel less alone in their experiencing life’s vicissitudes. But is saying, ‘I feel sorry for you,’ supportive in any way? How?

Some would say, ‘well, people tell you the story of their life, and that’s how you understand.’ Maybe so, but it seems to me that understanding problems based on stories all too often leads to shallow thinking and shallow conclusions.

The point I’m trying to make here is actually this one: If there’s a major fear that the spiritual community suffers from, then it’s this one: Everyone fears that they are not supportive enough.

Look around. How many times have you seen a spiritual community whose tower doesn’t get smashed at least once a day? Facebook is a great example of this. Look around for the ‘supportive’ dynamics in a group. It only takes about 5 minutes to see who rides what horses and in whose names. Sometimes all three, the riders, the horses, and the names, have a rather dubious character.

It’s often the case that what we quickly learn about ‘learning communities’ is that the ‘supportive’ is all about who is to be master. On occasion learning does occur, and inspiration can be at hand. But more often than not, the opposite is true. Proclamations are passed on as ‘the thing itself’, knowledge is passed on as understanding when it’s not, and ideas are passed on as original, when they are not. The dominant dominate, the weak are stunned, being caught in a perpetual state of non-differentiating, and the neutral let it go, indulging in the realization that you can’t be critical of the ‘supportive’ community.

There can be many reasons why institutions, groups, and communities go bust or experience a lot of trouble.

I find that chief among the tensions that lead to destruction has to do with meddling, with misunderstanding what being supportive is all about. It’s not about meddling. To be sure, meddling is not always explicit, as it’s often wrapped up in a cloth called ‘concern’, but it is nonetheless the cause for many a miserable situation.

Sometimes meddling is downright desired. When others tell you that you’re not being supportive, often what they’re really saying is that they’d like you to meddle some more in their lives, as this would mean that you’d be more invested in their craving for attention.

As I can’t imagine any type of meddling having any beneficial aspect, I’ll propose this instead: Imagine what might happen if people saw their individual roles in whatever community as having to do more with minding one’s own business, and less with following, listening to gossip, or giving in to the fear that if one didn’t support the views and opinions of a dominant voice, than one would have no identity to adhere to.

As for competitiveness and its supposedly bad name: Look at your most favorite spiritual leaders in your corner of the spiritual community. I bet they are competitive and have zero desire to meddle in other people’s affairs. They influence through results, not through talking about results.

It’s impossible not to be competitive when you want to be the best at what you have to offer. Support comes secondary to that.

Being the best at what you do doesn’t mean being non-supportive of others who also want to be the best at what they do. Generally, if people exercise their basic capacity for discernment, they can recognize competence beyond proclamations.

If people feel supported in their beliefs through your acts, it’s wonderful, but the starting premise for a successful delivery of a message is and always will be of a competitive nature first, and then of a supportive character. What you compete with is yourself. When your skills are improved you can be of support to others.

Knowing what tower you operate with and from, and taking it at face value, has far more beneficial consequences for your acts and experiences than deciding that a tower that’s tagged with an endorsed label is also real. A tag is not a representation of reality.

Communities come with a tag: The spiritual is often tagged with ‘supportive’ while the corporatist is tagged with ‘competitive’, but it will serve you well to know that once you buy whatever the tower sells, you can remove the tag and evaluate the content for yourself beyond others’ opinions about it.

If I should give any advice in tackling the shattering towers, it would be this: Mind your own business to the best of your ability and in accordance with your basic human decency. Exercise some of that discernment that you possess, that you can also discover you possess when you let yourself be uninfluenced by the voices in the tower. Listen to your own common sense, believe nothing, and keep going.

What makes you supportive is participating in seeing things as they are and standing your ground in that positioning.

Stay in the loop for cartomantic activities. Next in line is Art Tarot, a one-day workshop on June 23. 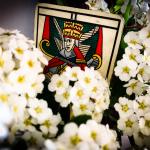 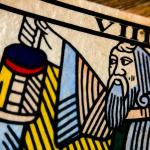 June 8, 2018 WHEN THE HERMIT IS EROS
Recent Comments
0 | Leave a Comment
"It was really helpful to see you literally lay out the many different messages you ..."
Laurie READING DIRECTION IN LENORMAND
"You're welcome."
Camelia Elias Playing cards for risk analysis
"Great article on working with Playing Cards. Thank you Camelia!"
CaitrionaReed Playing cards for risk analysis
"Timely. A good reminder (for me) that, ultimately, what is being preached is based on ..."
Beverly Frable The dead serious occultist in the ..."
Browse Our Archives
get the latest from
THE CARTOMANCER
Sign up for our newsletter
POPULAR AT PATHEOS Pagan
1

To Those Proselytizing Out Of Love:...
John Beckett
Related posts from THE CARTOMANCER

Shamanic Sobriety
It may seem discordant to talk about the 12 Steps in terms...
view all Pagan blogs
What Are Your Thoughts?leave a comment
Copyright 2008-2021, Patheos. All rights reserved.
error: Content is protected !!