WHEN THE WORLD IS NOT A CHEATSHEET

WHEN THE WORLD IS NOT A CHEATSHEET June 28, 2018 Camelia Elias

Imagine the woman in the World card, perfect as she is, making demands: ‘Why don’t you love me?’ Or, ‘tell me what you think of me’.

Imagine the woman in the World seeing everything that surrounds her as ‘validation tools’.

What I see that’s common in the interpretation of this card is that the World is suggestive of a state we arrive at after progress, practice, a 12-step program, shadow integration, or some other similar ‘123s, here’s the ultimate key to your happiness.’

Such an interpretation carries with it an implicit entitlement: ‘I’m here now because I made an effort. Pay me respect’.

But is this the World’s reality? No, it’s not.

Somehow I fail to see how the woman here, not touching the ground, is all about the idea that ‘the method, ‘the practice’, ‘the strategy’, ‘the self-love’ – all happily trademarked – got her to her elevation. The World card is not about being proud of it, proud of the process. It’s about self-reliance in that deeply mysterious sense of singular consciousness.

What’s belief got to do with it?

When we think about the implication of how we habitually internalize and then rehash interpretations without thinking about their premise, what we do is deconstruct belief.

There are many in the world who would swear that what they call ‘MY thing’ really helps people move from A to B. That may be so, and it’s all good. But is a method only about end stations, about moving in a specific direction with the sole purpose of arriving at a goal? Is a method about process and the geographical relocation of the soul?

Think again. What you see in the World card is a reality that’s not dependent on cause and effect. There’s no causality here: ‘Because I did all this, I got to this point. Hallelujah.’

Programs and practices subject you to a point of view. They are not the thing itself. ‘The thing itself’ has an elusive nature, and thank god for it, because it’s only due to this elusiveness that we get to move beyond principles, beyond rules and conventions.

Spell it out, and then move beyond it

I my academic career I was a method theorist. In my cartomantic practice, it’s about the same thing: Come up with a method that facilitates our understanding of complex matter. I theorize and philosophize about how we use cards, why, and about what’s the most useful to internalize at the basic level so that we end up delivering a sharp answer to a question.

But if method was all I did, I may as well join hands with the army of institutionalized spirituality leaders who devise cheatsheets for how you cope with life.

The point I’m trying to make here is that what we do in our work with the cards is more than survive or help others survive. The pack of 78 cards is not a fancy cheatsheet, with the World card giving you access to the master shortcut.

In divination we do more than disciplining our fingers on how to hit the right keys on the keyboards of our lives. We don’t push the archetype buttons, as if the ‘larger than life’ idea is not already part of us. We don’t empower ourselves by pointing to the mythical aspect of our lives, as if it were separate from what we experience on a daily basis.

If the boss is an idiot, isn’t he already a lion-dragon you try to tame? If your lover is clinging to you, making a fuss when you try to talk to another, isn’t she the siren you want to hide from? When you encounter an obstacle and come to a fork in the road, isn’t the old sage you meet a master able to help you, and if he can’t, how about a pact with the Devil? He’ll give you a tour of the underworld from where you won’t even be able to escape unless someone else pulls you up again with the power of their magical flute or trumpet.

The Fool’s journey, a non-myth

If the Fool undergoes a journey that gets him the mythical World, he doesn’t do it as a process that’s external to his discovery, or by following a method, as in ‘here’s an archetype, why don’t you embody it so you can conquer the world?’

Rather, when the Fool undergoes a journey that takes him to the World, he does it as part of the ‘program’ that’s called ‘life happens as it happens.’ There’s great intimacy in this natural unfolding of life, one that’s disclosed in the World.

I offered this thought to one of my students: True empowerment comes from the realization that we’re always already intimate with the mythical aspect of our lives. The mythical IS our life, not just an experience of it.

The World card asks you to look at what register you’re subjecting yourself to. ‘Costume’, ‘goal’, ‘practice’, and ‘progress’ all belong to the same register, aiming at transacting with and for your identity.

Remember this: Identity, the way it’s commonly transacted with, is not ‘you, the special thing’, but rather a set of manipulations with masks. If you’re ok with playing with masks, then more power to you. As long as you know that you’re not a set of rules, you’re not an identity, a special case identity.

Ask your cards: What am I beyond my goals and efforts?

For all it’s worth it too, let’s leave out the part of investigating into who or what defines your goals and efforts, as it’s not even sure it’s you who’s in control. Just ask:

What am I beyond my goals and efforts?

Be ready to witness the crumbling down of your most cherished beliefs, or pleasures.

Perhaps the cards will say, you’re not your culture, your family or your tribe. You’re your own justice. You are YOU above and beyond all the ideas that surround us, for better or worse.

Use your cards too to ask about what divination is to you.

As far as I’m concerned, divination is not about the experience of the future, love and relationship, work and strategy, dream and nostalgia, trauma and fixing it.

Divination is experience itself risen in chance and by chance. It is clear insight fixed in the heart. Divination is a World that’s self-sustaining, protected by totemic familiars and a fairytale flower-house. But ultimately all its own. 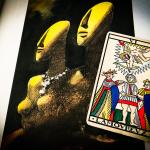 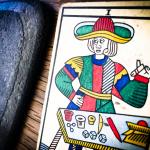 July 6, 2018 WHEN THE MAGICIAN DOESN'T IMPROVISE
Recent Comments
0 | Leave a Comment
"It was really helpful to see you literally lay out the many different messages you ..."
Laurie READING DIRECTION IN LENORMAND
"You're welcome."
Camelia Elias Playing cards for risk analysis
"Great article on working with Playing Cards. Thank you Camelia!"
CaitrionaReed Playing cards for risk analysis
"Timely. A good reminder (for me) that, ultimately, what is being preached is based on ..."
Beverly Frable The dead serious occultist in the ..."
Browse Our Archives
get the latest from
THE CARTOMANCER
Sign up for our newsletter
POPULAR AT PATHEOS Pagan
1