NOT THE FLAMING HEART

I confess I have a nasty character trait – maybe several, but let’s name this one: I tend to block out any conversation that starts with the words: ‘I believe…’ I simply cannot take any person using this phrase seriously, even though the person in question may be earnest, may have something valuable to offer, or, which is bad in itself already and deserves dismissing, the person I’m talking to doesn’t really mean anything by invoking belief, as it’s just something one says.

Be that as it may, I hear the words, ‘I believe,’ I go to Jupiter. Any other fantasy is better than the fantasy of believing things.

Why this resistance? It has many roots, some more practical than others, but let’s invoke the pragmatic aspect of this phrase and its implications:

From these beliefs to ‘I believe Trump can make America great again’ there isn’t a lot of debatable room.

So many beliefs, too little action, or indeed, too much action. When the Christians acted upon their beliefs, they went all the way to Japan. They didn’t have much luck there as the Zen people don’t dig beliefs, but they made an impact elsewhere.

I won’t go into a dissertation on belief, but I wondered today about what would happen if we dropped the phrase from our vocabulary and replaced it instead with ‘the art of’.

Let’s take the top example, and replace ‘I believe in being happy’ with ‘The art of being happy’. The ancient Greeks called this eudaimonia, and developed a whole set of principles anchored in making the right decisions.

When we think of something as art, something that we can cultivate, rather than receive, which is the case with beliefs – whether beliefs are transmitted or experienced through personal gnosis – we train invariably our discerning nerve. Who wants to cultivate that whose purpose is not clear in our heads?

The point I want to make is that it may pay off to see what shifts in you, if you were to think of your beliefs as something that needs replacing, making room in your head for seeing how living is an art that you not only participate in, but can refine.

Now read your cards with this question in mind:

How can I turn seeing what I see into an art?

Please note that what I’m presupposing here is dropping all belief, so that the premise for your question is based entirely on clarity, on the ability to see what is actually the case, not hearsay or wishes and fears, all primary ingredients in beliefs.

My cards, I Tarocchini del Mitelli, say this today:

However valuable, if you cannot discard your beliefs, you can at least try to bag them. Then work diligently on this reality:

The blindfolded Cupid cannot possibly know what he’s offering you, since he can’t see it himself, but you can be sure that he’ll convince you to believe that it’s the flaming heart.

You have two options: to check for yourself, or to be seduced into believing. Being seduced into anything makes you feel good, but it’s been a while since science or anything else for that matter, from the occult to storytelling, ‘believed’ that ‘feeling’ a reality makes. It does not.

Whatever we accomplish, from magic to cultural success, we accomplish it because of the power of suggestion. Cultivate that and you’ll be able to move a few mountains.

Keep a cool head, and turn your actions into art. 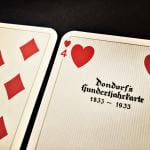 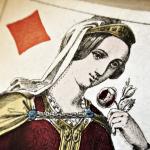 March 29, 2019 THIS SALES PERSON UNDERSTANDS ME SO WELL
Recent Comments
0 | Leave a Comment
Browse Our Archives
get the latest from
THE CARTOMANCER
Sign up for our newsletter
POPULAR AT PATHEOS Pagan
1