Often the remedy comes in the shape of products you can buy. Blessed products are even more interesting. I myself like the idea of a blessed product, as there’s enchantment power in the act of blessing.

But does it work? This is the question I got recently from someone who wanted to buy magic oils. These oils produced with purpose, consecrated and blessed, can be very expensive, all according to the time and dedication that each magician chooses to put into it, but as this work is not accessible to verification, I can understand people’s hesitation.

I got some interesting cards for this concern, which is the reason why I take the liberty to share the reading:

Three cards fell on the table, for the specific question: ‘Does it work?’

Death, Ace of Cups, the Pope. The 10 of Cups was drawn in addition to a follow-up idea.

Let’s unpack what we see here that made me conclude the following:

The magic oils work in the exact same way as receiving a blessing works. If you believe in the power of consecration, which is what the Popes of the world do, then it works.

My querent was perceptive though, and insisted, which I why I liked this session:

‘But what of Death in that position there? Why is it there at all?’

‘Ah, a very good question,’ I said, and then continued. ‘You see, death is beyond what you fill your vessel with – here a conviction promulgated by the Pope – which means that if we consider this aspect of it, then the answer to your question is no, the magic oils don’t work at all, no matter what the condition or parallelism is, as in ‘this works in the same way as this other thing works.’ Death says, ‘essentially there’s nothing there. There’s no comparison.’ A blessing or a consecration consists of performative words – the Pope’s specialty – offered to your emotional desire, here, your desire for the holy grail containing a magic oil.’ I pulled another card, the 10 cups, and said the following, yet maintaining the flow, ‘if your cup is full, it’s likely you’ll give in to more desire, as you’ll want more, all there’s to get. The Pope will always be at your disposal, dispensing consecrations all according to your begging.’

‘I don’t like that poor person begging in front of the rich Pope’. ‘Me, neither,’ I said in response, in a tone avoiding validation or the relatable.

‘Ok, I’ll skip the oils and go with Death. Can we talk about Zen instead?’, my querent wanted to know.

‘We already did,’ I said, and then thought of the power of belief, and how much more powerful one is without any.

The point of this exchange is that there’s nothing like working with the cards. They always hit you at exactly the right spot, but there’s a condition for being able to appreciate it. It’s called putting yourself in a place prior to opinions. ‘He said, she said, I heard…’ Testimonials galore. Of all kinds.

As an aid towards putting yourself in a place prior to opinions, what I say is that it’s worth remembering a few magical mantras: ‘Everything popular is wrong’. I quote Oscar Wilde a lot in my work with the cards, as it helps the querents put their minds at ease. If you don’t give in to following popular trends for what you can expect, then you’ll get to see in the cards, exactly that which is actually the case. That’s the miracle, and that’s how we get beyond performances.

Stay in the loop for cartomantic courses. The Playing Cards Foundation Course opens for registration tomorrow.

January 24, 2020
The new dark moon is for infinity, not intentions
Next Post 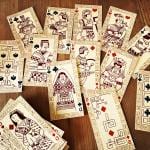 February 10, 2020 Let us laugh, amen
Recent Comments
0 | Leave a Comment
Browse Our Archives
get the latest from
THE CARTOMANCER
Sign up for our newsletter
POPULAR AT PATHEOS Pagan
1