The new dark moon is for infinity, not intentions

The new dark moon is for infinity, not intentions January 24, 2020 Camelia Elias

It’s the New Moon. People talk about setting intentions by giving form to their desires. When the moon is new we think of boundaries and how to conserve our energies. But what we don’t think of is the fact that when the moon is new it’s also dark. This means that we can’t really see it. Is there an analogical application of this darkness apart from fallaciously associating it with concretizing plans?

From a sympathetic magic point of view, I have to say that I don’t see the point of this analogy: invisible moon equals visible plans. How is this kind of thinking logical?

I get the point of setting intentions, as we may be tired of the same rhythm in a month, so it’s good to refresh ourselves with the new moon by flushing out the tedious, but I think that we would be better served if we considered a different analogy than the one that ‘grounds’ our desires in a nebula of darkness.

Here’s what I propose. There’s greater magic in thinking of how the new moon completely blends in with its own darkness and the darkness of the sky. Granted, the sky is never dark as such, as each star does its job at shining brightly, but as far as we’re concerned, the moon is invisible and not to be found. Perhaps the moon is not to be bothered either by our mundane plans and desires for accomplishments.

Some say this is a good time to go within, and explore the inner self. There’s something to be said for that, but if you’re like me, Zen inclined, then the whole notion of the self is not so seductive. I don’t want to tell myself more stories about myself and what I can or cannot do, anymore than I want others to tell me stories about myself, about how I am supposedly, and how I can get better at whatever it is that I fail at.

The dark, new moon is infinite. Formless. I’m thinking of the beauty of the formless and the freedom that it affords us, including freedom from having to do things, define clearly what we want, concretize coherently our notions of the next steps towards success, and any of the other illusions. I want the infinity of the new moon to allow me to sink into the sublime of being a ‘no doer’. At moments, just as there’s no ‘to be or not to be’, so there’s no ‘to do or not to do.’

My fellow countryman, the infamous Emile Cioran, wrote these words in his book, On the Heights of Despair, that I share here for your new and dark moon reflection:

“Infinity leads to nothing for it is totally provisional. ‘Everything’ is too little when compared to infinity […] The penchant for form comes from love of finitude, the seduction of boundaries which will never engender metaphysical revelations […] Let us live in the ecstasy of infinity, let us love that which is boundless, let us destroy forms and institute the only cult without forms: the cult of infinity” (99-100).

I’m surprised at Cioran’s passion here, as usually he’s more into making himself odious by pointing to many futilities in our lives that we habitually cherish. But I can see why he’d get excited by the cult of infinity…

Instead of setting intentions, and asking the cards about how you can go about implementing what you want, how about you ask the cards the following:

How can I sink into infinity, and merge with the invisible new moon in the dark sky, so that I can better sense what is essential and what is not?

The idea is to forget concreteness, boundaries, plans, and forms your desires can take for a coherent expression. The idea is to explore infinity and the formlessness of your whole being, because that’s what the dark moon is there for.

My own cards suggested the following:

First the magic, and then the sharing of it.

The point of magical awareness begins with hearing ourselves all the time. Also the stuff that we don’t want to hear. If we do it, chances are that we can have an experience that’s not bound to other people’s sense of finitude. If you say to yourself almost per commando, ‘set your intentions’, pay attention to who’s speaking, because it’s not sure that it’s you.

When you’re done listening to yourself, then question the precept and to what extent it makes sense for you to repeat it. Today I’ll say this with a modification, if I must repeat other people’s ideas: Set your intentions in the moon’s infinity, and see how far you get with those plans of yours. You might discover a lightness of being, a merging with the infinite. That would be as sublime as it can get.

Stay in the loop for catomantic course. next in line is the Playing Cards Foundation Course, in February. 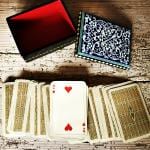 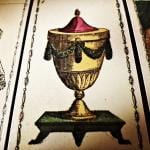 Curative Magic: Dealing with Grief
Time is one of the best healers for grief, but it is...
view all Pagan blogs
What Are Your Thoughts?leave a comment
Copyright 2008-2020, Patheos. All rights reserved.