A thing of beauty: up, down, and the unpredictable

These days I perform straight-up fortunetelling. This means that I get to predict all sorts of events, going also with the 50/50 flow of statistical science. Now I get it, now I don’t. It’s a job no different than stock trading. There’s a sense of knowing when things go up, when things go down, and when things are unpredictable. In this sense here, and in extrapolation, we share the same type of suffering where lack of clarity is concerned, as we sometimes happen to go up when we should go down, down when we should go up, or stall because we’re clueless regarding the direction and momentum of our ascending and descending.

In situations such as these, when clarity is missing either due to our own faulty judgment or because of external conditions we can’t control, what I advise is seeking and creating beauty. But what form can such a thing take, and how real can it feel, when nothing is real? While donning a red dress and putting perfume on can seem empowering for a moment, as soon as the fashion enchantment wears off, we’re back to square one. Dressing for the part, whatever part, is a powerful thing, but if dressing for the part is not addressed to the individual self, then it’s just a cheap trick. Other tricks are more interesting. In my work with he cards, I have an eye for that part, the part that exceeds all clichés, however powerful or soothing the clichés can be.

In mindfulness circles, from the smart to the awful approaches, a thing of beauty is interpreted as self-compassion. Whereas in the Tibetan tradition – relying heavily on the notion of compassion – self-compassion is equated with the capacity to be present to and acceptant of whatever arises, in the mainstream Western understanding of this concept, self-compassion is a thing of beauty when it’s about refraining from self-harm. I often think about the difference in these approaches to the same idea, but it is ever so true that while some cultures are clueless about self-harm, as the notion doesn’t even exist, some other cultures build entire empires exploiting the very idea: ‘you’re harming yourself, here’s a 12-step program that will help you out of it.’

I’m not a fan of intuition when intuition is not the result of sheer clarity, but I have to say that although I myself am a Western subject, the notion that self-harm exists and that we invest a lot of energy in it – by being in it and then by attempting to get out of it – has always struck me intuitively as an inherently crazy idea.

As it happens, from my work with people I know how self-harm manifests, from the heavy-duty style to the more benign, and I always conclude that when self-harm is present, then it’s due to three shortcomings: 1) the inability to read a landscape and hence know something about your positioning vis-à-vis what’s happening; 2) the inability to see what’s happening by default; and 3) the inability to accept the default situation and hence mistake it with personal agency. Resisting to situations can provoke outbursts of the detrimental kind, the only one hurt in the process being the one who is unable to know better.

Which brings me to what I make of ‘the thing of beauty.’ I’d say it’s this ‘knowing better,’ knowing everything about the functionality of up, down, and the unpredictable. Eastern cultures, and cultures invested in the cultivation of the Zen mind – martial arts style – are much better at grasping the beauty idea behind this trifecta, as we’re here with a territory that’s divested of preoccupations with the ‘self,’ but generally, we all have access to how we manipulate with the metaphors we live by. Here, I venture to advance the claim that, essentially, when we read the cards in order to figure out how we act and how we react to situations, we never do anything else other than enforce this thing of beauty upon our readings, when we pass judgment on what is up, what is down, and what is unpredictable.

In today’s essay, I thought of offering this idea: read three cards in positions, with each card designating what is up, what is down, and what is unpredictable, respectively.

To illustrate here I used playing cards, but you can use the Tarot for it, or another oracle deck if you prefer.

What is up is 8 Spades. Pain, quite intense too, as we’re only two spades away from the full manifestation of 10. Concerns with collective pain, we might say.

What is unpredictable is 7 Spades. More pain ahead. Traditionally the 7 Spades has been associated with tears.

Taken together in a synthesis, I can’t help thinking about the direction of this, and how, if we go from collective pain to the loss of heart, crying over it is not that unpredictable.

So I’d say that in order for things to be remediated, and turn the unpredictable – that here, however, appears predictable – into a thing of beauty, what we’d need to work on is this loss of heart. If the heart’s desire is down, what’s left, indeed? Tears.

Sometimes tears are welcome, but I’d never dream of saying to anyone, ‘cry baby, cry,’ because it’s cool to show your vulnerability and it’s a sign of self-compassion. As I said, I don’t like cheap tricks.

So, what then? Listen to the heart. That’s where we’re at. If it’s down, it can come up again, because that’s how things go all the time, up and down, and then the unpredictable way. What can lift the heart? A concern for the collective? That gives pain, as we’ve just learnt. Besides, just think: in classic fortunetelling, although we have 9 hearts represented on the 9 Hearts card, the idea has never been that the 9 hearts is about the hearts of a collective. No, 9 hearts stand for the one and only heart.

I entice you to think about it. Read your cards for the thing of beauty, and get a sense of how much clarity you have when you need to discern between what’s up, what’s down, and what’s unpredictable.

Stay safe and keep going. For similar type of questions and deconstructions of the mind and language, see What is Not: Marseille Tarot à la Carte. 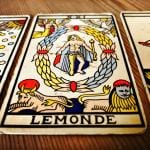 October 21, 2020 A good magic operation: when you panic, celebrate
Recent Comments
0 | Leave a Comment
Browse Our Archives
Related posts from THE CARTOMANCER 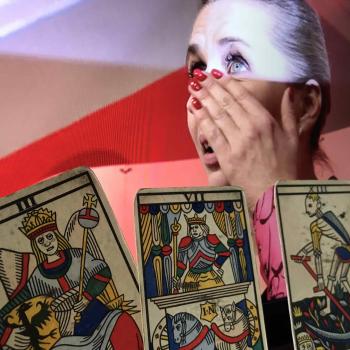 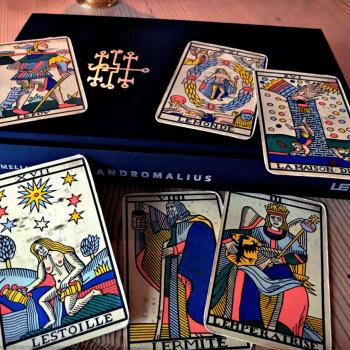 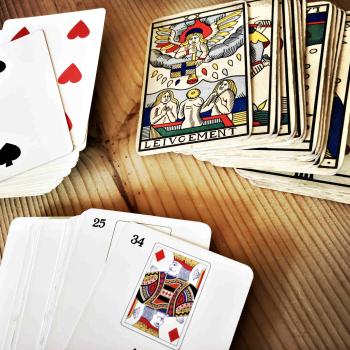