Ask for respect on solstice day

I’m writing while Mercury is cazimi, or in the bosom of the sun right now. There’s thus extra brilliance that I’m under, that I secretly, or not so secretly, hope showers on me. To mark the event, I made sure to finalize my 6th book this year, The Childless Witch, available soon on the threshold of the new year.

As we’re also right under the influence of the Great Conjunction between Saturn and Jupiter, exact on solstice day, moving into a new cycle on all fronts, I thought about what is auspicious to ask for, as this is what humans do, ask for things from the stars. It’s not for nothing that we also have a habit called ‘wishing upon a star.’

It’s been astonishing to see how the mundane world has been influenced by the excitement of countless astrologers, with many people getting interested in knowing something about auspicious times to do something. As for the astrologers, let’s just say that I haven’t seen so many new projects launched on the day Jupiter ingressed into Aquarius as yesterday. Exciting indeed.

How, however, when it comes to cards, what might we do, or ask for? I’ve just offered a thought in the Aradia Academy Alumni group in a live video, the gist of which you can have here too.

I suggested that you cast a larger spread of cards, from 10 to 13, if the Tarot, or a grand tableu, if the Lenormand, and look at how the notion of respect emerges from the cards.

Pay attention to where the Hermit, Death, and the Emperor fall in your spread, or indeed, the card of the Star, if you’re with the Lenormand. The Hermit and Death represent the nature of the greater malefic, Saturn, so here the focus is on cuts, structures, retreats, old age, and death. As we all move towards the domain of Saturn, and people come to pay precisely their respects at funerals, it’s good to have these aspects in mind, and think about how we might gain the respect of others before we’re 6 feet under. The Emperor represents Jupiter, the greater benefic, so the focus is on how we expand a territory, and then manage it well as well.

When you put these ideas together what I see emerge is indeed the notion of respect. With Saturn and Jupiter joining for the first time in centuries in an air sign, we can think of how we might defy gravity, and fly. From high altitude we can see many more things. We can become more creative by allowing our curious mind to stretch widely. Think of the opposite of digging, going inwards to the belly of the earth or chasing the shadows of our material bodies. All good until it gets too much. Personally, I’ve found especially the shadow part tiresome. I need air. Many who got the corona virus need air.

Information circulates through the air. This has been exquisite. Just look at how much information we have of the very astro weather at our finger tips. We can draw talismans on a daily basis and on short notice. Even without any real knowledge of astrology, just about anyone can benefit from knowing better.

But here’s the catch too. Who is respected for their knowledge? Not all who possess information are knowledgeable in the sense of having understood the premise for the dissemination of information.

What we want to move towards is acquiring distinction, enhancing our ability to separate the chaff from the wheat. That would make Saturn happy. Look at the cards that fall next to the Hermit or Death. Are they slow, or are they fast? What functions do they have? What quality their substance and tone? If you need to sit on your territory with confidence, do you consider integrity as part of what confers you class, ensuring that your style is unmatched? I my last chapter of The Childless Witch, I wrote about my mother having class, the type that never goes out of fashion, even as she declared that one way in which she managed a break-up elegantly was to have an abortion. The Emperor and the Empress in the Tarot speak of class and the integrity that underlies it.

Enjoy your solstice and the Great Conjunction, a once in a life time event for most of us. I hope you get the respect you all deserve, if your place of acting is one of great style.

Stay tuned for cartomantic courses at Aradia Academy, or read some books. 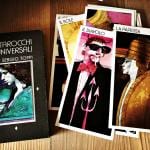 November 20, 2020
Dispossess yourself from the demon called feeling
Next Post

January 18, 2021 How to clean and tidy up as if your life depended on it
Recent Comments
0 | Leave a Comment
"It was really helpful to see you literally lay out the many different messages you ..."
Laurie READING DIRECTION IN LENORMAND
"You're welcome."
Camelia Elias Playing cards for risk analysis
"Great article on working with Playing Cards. Thank you Camelia!"
CaitrionaReed Playing cards for risk analysis
"Timely. A good reminder (for me) that, ultimately, what is being preached is based on ..."
Beverly Frable The dead serious occultist in the ..."
Browse Our Archives
get the latest from
THE CARTOMANCER
Sign up for our newsletter
POPULAR AT PATHEOS Pagan
1