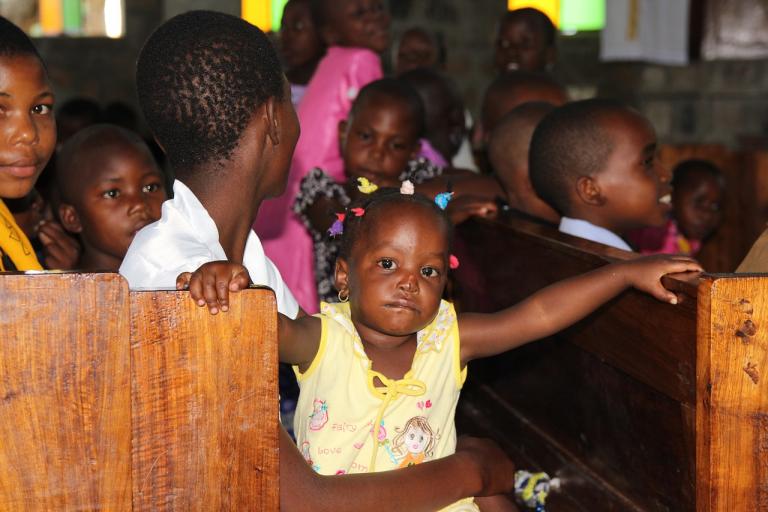 A couple of weeks ago, I actually got to Mass without kids. I had the weekend off, and I decided to treat myself by going to a liturgy with a full choir and a partially sung Mass. As I sat enjoying the quiet, the beauty of the music and the freedom from having to continually police the behavior of small bodies, I noticed a little girl running up and down the aisle.

Specifically, she would run up the aisle, shouting “Mama!” Her mother would hold her for a while until she got fussy, then take her to the back of the church. A few minutes later, she would come running down the aisle again, this time yelling “Dada!” A couple more minutes in the pew, and daddy was the one taking her to the back. This cycle repeated itself several times over the course of the Mass.

After about three repetitions, an older woman sitting in the pew in front of me leaned over and whispered to her neighbor, “What a cute little girl!”

For years I’ve been the parent trying to keep that little girl (or boy) quiet, well-behaved, and sitting down. The parent trying to stop them from climbing over the back of the pew, or wriggling under the bottom of the pew, or stacking the hymnals in a pile and knocking them over…or from running up the aisle shouting. My efforts have been about as successful as the efforts of these parents.

The specter of disapproving, distracted parishioners kept me on my toes, stressed out, and more often than not totally unable to pay attention to the liturgy at all. Like so many mothers I had interiorized a handful of nasty comments, a few censorious articles in the Catholic press, and the occasional petulant glare. If I wasn’t keeping my kids in-line I was ruining the liturgy for others, keeping them from their prayers.

In my imagination, every time my toddler behaved like a toddler, the attention of the entire church turned towards me with intense irritation. I mean, obviously that wasn’t completely true. Obviously there were kindly old women, once mothers themselves, who would say nice things to make me feel better. But really, out of consideration for others, I should try my hardest to keep my kids silent and unseen.

This was the first time that I got to step outside of the shoes of the harried mother and be one of those other parishioners, on the far side of the church, distracted by the toddler’s antics. And she was adorable. Her little voice crying “Mama! Dada!” with such joy was a great sermon: a reminder of how we are supposed to run, trusting and loving, into the arms of Our Lady and Our Father. Her presence, loud, active, and vibrant, bore testament to the living wonder of faith.

Nor was I the only person who thought so: the woman in front of me wasn’t just being nice to make the mother feel better. Her comment couldn’t possibly have been heard by the parents two aisles away. She was expressing how she naturally felt about a child at Mass.

It is, incidentally, the natural way for a human being to feel about a child. If the child is screaming, yes, that’s an unpleasant sound that nobody wants to hear. But if a child is just existing as a child who doesn’t happen to behave like a carefully trained pet at the country fair, most people’s natural reaction is to think that the child is cute. Not a nuisance. Not a distraction. A delight.

This includes people who are craving quiet and trying to enjoy the liturgy. As I said, this was the first time in a long while that I got to be out of the house without a host of children in tow. If anyone had a just and legitimate reason to hope for an hour without having to endure the distractions caused by tiny humans, it was me. But I loved seeing that little girl in church. And from the smiles of the parishioners around me, I’m pretty sure that the people who enjoyed the presence of that little worshiper massively outnumbered the cranks.

April 2, 2018 My Baby's Keeper? NFP and Postpartum Depression
Recent Comments
0 | Leave a Comment
"I'm not assuming either way, but what if it turned out that they did agree ..."
Makishima Are Women Being Denied the Truth ..."
"The most traditionalist people I've met quote female saints constantly, and reproach Popes, priests and ..."
Ginger An Open Letter to the Young ..."
"I am one of those atheists who don’t care what anyone believes, but care very ..."
Ben in Oakland Crossing the Rubicon: Why I Will ..."
"You guys are calling Gnostic views nonsense, while not even naming one of these possible ..."
Justafoolagain Make Women Slaves Again
Browse Our Archives
get the latest from
Catholic
Sign up for our newsletter
POPULAR AT PATHEOS Catholic
1