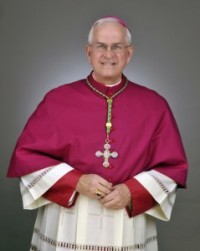 Welcome back to “The Clergy Speaks”, a recurring feature here at The Catholic Book Blogger. “The Clergy Speaks” is a column focusing on one question I have asked various members of the clergy. That question is: What five books would you recommend as must-reads for Catholics today? I left the responses open to current or classic books with the only restriction being that the Bible and the Catechism could not be used as they are a given. This week I am pleased to welcome my Archbishop Joseph E. Kurtz of the Archdiocese of Louisville, KY.

His Holiness Benedict XVI appointed Most Reverend Joseph E. Kurtz, D.D. as the fourth Archbishop and ninth bishop of the Archdiocese of Louisville on June 12, 2007. He was installed as Archbishop of Louisville on August 15, 2007. Before coming to Louisville, Archbishop Kurtz served as Bishop of Knoxville from 1999 to 2007.

Elected President of the United States Conference of Catholic Bishops on November 12, 2013, Archbishop Kurtz serves on the executive and administrative committees of that body. He is the vice chancellor of the board of the Catholic Extension Society. He serves on the Board of Trustees of the Catholic University of America and on the Board of Directors of the National Catholic Bioethics Center. He also serves on the board of St. Charles Seminary (Philadelphia, Pennsylvania) and on the Advisory Board to the Cause for Archbishop Fulton Sheen’s beatification. In February of 2014, Pope Francis appointed Archbishop Kurtz to the Holy See’s Congregation for the Oriental Churches.

How good to receive your request that I share some “must” items for Catholic adults as they seek good reading. I had the chance to read Bishop Rhoades’ suggestions on your site and will not repeat those good ones that he mentioned but rather will add additional suggestions. The final three of the list below are works that some local Catholic theologians and I have made the subject of a reading club that meets about three times a year. (Our next book for the reading club is Pope Francis’ The Joy of the Gospel, which Bishop Rhoades had listed.)

1. Pope Benedict XVI, Jesus of Nazareth (3 volumes). Pope Benedict guides the reader through the life of Jesus, grounded in solid Scriptural study and filled with easy to read descriptions. Volume 3

(Image Publishing, 2012), the Infancy Narratives, is perfect reading for Advent and the Christmas Season; Volume 2

(Ignatius Press, 2011), Holy Week: From the Entrance into Jerusalem to the Resurrection is great for Lent, Holy Week and the Easter Season; and Volume 1

(Doubleday, 2007), the Public Life of Jesus, is perfect reading for the fall.

(Basic Books, 2013) was a wonderful Lenten, Holy Week and Easter Octave companion for my morning holy hours. Not only is this book a beautifully presented introduction to the inspiring architecture of churches in Rome, it introduces the reader to pray along with those who visit station churches as Lent unfolds in the Eternal City.

, a collection of sermons from St. Augustine published by New City Press in 2007. These timeless gems, now 1500 years old, give insights into Sacred Scripture and Catholic theology as applied to the pastoral situations of St. Augustine’s day. They are as deeply entertaining as they are instructive.

. Written in 1609, this classic treatise is easy reading, filled with vivid examples, and gives insight into a bishop’s keen spiritual direction of the lay people of his day.

. Published in 1962, this compilation of 39 chapters treats topics of deep relevance to the call to contemplation with beautiful meditations on the life of Christ.

While I realize that I was asked to list five of my favorite books that would be a help to the Catholic reader (and for that matter, to anyone searching for the truth), I will sneak into this list an additional entry that I just finished reading last week – a true classic for those wanting to uncover the beauty of the Catholic Faith: Orthodoxy, written in 1907 by G.K. Chesterton (and republished by Ignatius Press). So clever and entertaining is Chesterton that I almost laughed out loud as I read it on the airplane. His insightful analyses of life could well have been written yesterday. Allow me one quote: “People have fallen into a foolish habit of speaking of orthodoxy as something heavy, humdrum and safe. There never was anything so perilous or so exciting as orthodoxy.”

Thank you so much for inviting suggestions for your Catholic Book Blogger site. You are providing a fine service!
Sincerely yours in our Lord,
Most Reverend Joseph E. Kurtz, D.D.
Archbishop of Louisville

September 16, 2014 Church Fathers, Day Fifty-Seven: St. Ephrem tells us to make the sign of the cross everywhere
Recent Comments
0 | Leave a Comment
Browse Our Archives
get the latest from
Catholic
Sign up for our newsletter
POPULAR AT PATHEOS Catholic
1