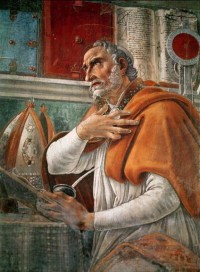 Just as in our own time, educated people in the time of St. Augustine loved to look down on lower-class accents. Dropping the letter ‘h’ was a notorious sign of poor pronunciation. Yet with all the effort they put into the rules of speak­ing properly, these same people could easily ignore the commandments of God.

See, God, and see it patiently, as you always do, how diligently people ob­serve the conventional rules of letters and syllables, as they have been passed down from those who spoke before. And yet they neglect the rules of eternal salvation passed down from you!

It’s true. Suppose someone who teaches the traditional rules of pronuncia­tion should go against grammatical usage and say “a ’uman being,” dropping the h. People will be more offended by that than if he—a human being himself— should hate a human being, in opposition to your commandments.

Yet how can anyone think an enemy could be more destructive to him than the hatred he feels toward his enemy? Could he destroy the man he persecutes more completely than he destroys his own soul by his hatred?

Compassionate and merciful, long-suffering, and gracious God, deliver me from all tempta­tion to hate my neighbor.

The Grace of God in Scrambled...
Steel Magnificat
Related posts from The Catholic Book Blogger