Church Fathers, Day 255: St. John Chrysostom advises us to listen to our conscience 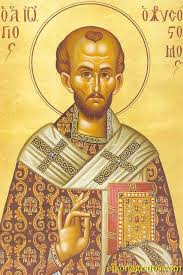 Listen to your conscience

Even your own father might have given up on you if you had never listened to him, says St. John Chrysostom. But God has given you a conscience that isn’t willing to give up. It will keep after you until you confess your sins.

Even if you do not confess, God is not ignorant of the deed, since he knew it before it was committed. Why then do you not speak of it? Does the transgression become heavier by the confession? No, it becomes lighter and less troublesome.

And if you do not confess the greatness of the need, you will not understand the enormous magnitude of his grace. I do not oblige you, he says, to come into the midst of the assembly before a throng of witnesses; declare the sin in secret to me only, so that I may heal the sore and remove the pain.

Therefore he has placed within us a conscience more faithful than a father. For a father having warned his son once, or twice, or three times, or perhaps ten times, when he sees him remaining uncorrected, publicly renounces him and dismisses him from the house, and severs the tie of relationship. But conscience does not act that way. For if once, or twice, or three times, or a thousand times it speaks, and you do not obey, it will speak again, and will not cease until the last breath; and both in the house and in the street, at table and in the market, and on the road, often even in dreams, it places before us the image and appearance of our sins.

When I listen to my conscience, is it trying to remind me of something?

April 1, 2015
CBB Review - Soul of Christ: Meditations on a Timeless Prayer
Next Post

Approaching God for the Wrong Reason
During my first few years as a priest, I would travel about...
view all Catholic blogs
What Are Your Thoughts?leave a comment
Copyright 2008-2021, Patheos. All rights reserved.