“Pope Francis’ encyclical, Laudato si’, calls us to action in caring for our common home. A national carbon standard is a critical step for the U.S. at this time,” Bishop Frank Dewane of Venice, chair of the U.S. bishops’ domestic justice and human development committee, stated Oct. 10 after the Environmental Protection Agency announced a planned repeal of the Clean Power Plan.

Scott Pruitt, head of the Environmental Protection Agency, announced the repeal on Monday.

The Clean Power Plan, finalized in 2015 under the Obama administration, set goals for states to reduce carbon emissions from the utility sector, ultimately aiming to cut emissions by 32 percent by 2030.

President Obama announced the plan in August 2015, citing the need to curb pollution amid climate change and to reduce domestic health concerns such as asthma rates.

“By some estimates, a fully implemented Clean Power Plan could have prevented: 2,700 to 6,600 premature deaths; 140,000 to 150,000 asthma attacks in children; and 2,700 to 2,800 hospital admissions,” the Catholic Climate Covenant, a national partnership that seeks to educate Catholics about Church teaching on the environment, said.

The plan was “an important step forward to protect the health of all people,” then-chair of the U.S. bishops’ domestic justice and human development committee, Archbishop Thomas Wenski of Miami, stated.

However, in February 2016, the U.S. Supreme Court halted the plan being put into effect. President Trump ordered a review of it with the possibility of rescinding the plan in his executive order on energy independence in March, and Bishop Dewane warned that the order “effectively dismantles the Clean Power Plan.”

Pruitt, in a March 30 letter to state governors, told them that in light of the Supreme Court’s stay on the plan, they did not have to abide by the goals and standards set by the plan.

“It is the policy of the Environmental Protection Agency (EPA) that States have no obligation to spend resources to comply with a Rule that has been stayed by the Supreme Court of the United States,” Pruitt wrote. “The days of coercive federalism are over.”

On Monday, Pruitt announced the plan would be repealed, to the disappointment of the U.S. Conference of Catholic Bishops and the Catholic Climate Covenant.

The chief fault of Tuesday’s announcement was that there is no sufficient replacement plan, Catholic Climate Covenant said.

Furthermore, coming on the heels of the U.S. pulling out of the international Paris climate agreement, where participating countries pledged to cut pollution and contribute to the Green Climate Fund, the repeal “solidifies the already troubling approach of our nation in addressing climate change,” Bishop Dewane said.

Recent Popes along with bishops from all over the globe “have all accepted the reality of human-forced climate change,” Dan Misleh, executive director of the Catholic Climate Covenant, stated on Tuesday. “And we know that our burning of fossil fuels is among the biggest contributors to this moral dilemma.”

The Clean Power Plan offered “flexibility to allow states to meet carbon reduction targets in meaningful ways,” he said. “This repeal now throws all of these potential gains into question.”

In paragraph 26 of the encyclical, Pope Francis warned that “some of the negative impacts of climate change … will continue to worsen if we continue with current models of production and consumption.”

“There is an urgent need to develop policies so that, in the next few years, the emission of carbon dioxide and other highly polluting gases can be drastically reduced, for example, substituting for fossil fuels and developing sources of renewable energy,” the encyclical stated. 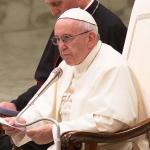 October 11, 2017
Pope Francis: Death Penalty is Contrary to the Gospel
Next Post