Before I jump in to my reasons, I should say a word about what I mean by “historical.” By using that word, I simply mean that the author of Genesis 1-11 intended it to be read as an account of what actually happened. That does not mean it is simply a laundry list of disconnected facts – after all, it is a story – but it does mean that the author intended his audience to understand the story as a factual one: God actually created; Adam, Eve, Cain, Abel, Enoch, and Noah all existed; the Flood was real; Babel was real. I am not presupposing a position on the length of the creation days or the extent of the flood – those are certainly connected issues. However, one cannot address everything, so I limit myself to asserting that creation, the flood, and the other events recorded in Genesis 1-11 actually happened. Now, to my arguments!

1) The entire book of Genesis is structured by ten toledoths: 2:4, 5:1, 10:1, 11:10, 11:27, 25:12, 25:19, 36:1, 37:2.[1] Toledoth is just a transliteration of the Hebrew word which most English translations render as “generations.” Each toledoth introduces a “historical narrative of…the family in view.”[2] The phrase is not equivalent to “once upon a time,” but rather signals that the author is embarking on a historical narrative. That is why the phrase “these are the generations of” can be used in the later portion of Genesis and it is widely regarded as written with historical intent (even if critical scholars question its historical accuracy) in such passages as 25:19, 36:1, and 37:2. Furthermore, the phrase is used in Numbers 3:1, Ruth 4:18, and 1 Chronicles 1:28, with similar phrases occurring elsewhere in the Old Testament in passages clearly intended to be understood as historical.

2) Genesis 1-11 contains at least four distinct genealogies: 4:17-26, 5:1-32, 10:1-32, and 11:10-26. I will briefly touch on the theological meaning and significance of genealogies below, but my point here is that genealogies are at least intended to make specific historical ties between the people and accounts they connect. Again, consider the fact that genealogies pop up throughout the rest of Genesis (25:12-18, 36:1-40) and in the Pentateuch (Exodus 6:14-25 cf. Numbers 1-4) and in the rest of the Old Testament (Ruth 4:18-22, 1 Chronicles 1-9) in historical narratives. If you are expecting Genesis 1-11 to be an exciting legend, these chapters aren’t exactly the material you would expect.

3) There is no break between Genesis 1-11 and 12-50, and since it is largely recognized that chapters 12-50 are intended to be historical there is no reason to section off chapters 1-11 as myth. If you sat down to read the book of Genesis in one of the lovely reader’s Bibles which are now available (Bible’s without chapter and verse markings), the story of Genesis continues seamlessly from chapter 11 to 12. In fact, the author goes includes the genealogy of Shem in 11:10ff to specifically identify Abraham as his descendent. This touches on the broader theological unity of the book of Genesis, since the Protoevangelium in 3:15 zooms further and further in on the promised seed of the woman. From Seth’s line is chosen Noah; from Noah’s, Shem; from Shem’s, Abraham; from Abraham’s, Isaac; from Isaac’s, Jacob – until finally we are left with the twelve sons of Jacob who father the twelve tribes of the nation of Israel.[3]

Furthermore, Jesus (Matthew 24:37-42), Peter (1 Peter 3:20, 2 Peter 2:5, 3:6), and the author of Hebrews (Hebrews 11:7) all affirm the historicity of Noah and the flood, and all argue it is a type of the final judgment. The author of Hebrews also speaks of Cain and Able (11:4, 12:24), and Enoch (11:5), in a list of faithful man and women from throughout Old Testament history. If you think you can safely dismiss Old Testament stories as long as you believe in Jesus, you need to realize that Jesus believed in those stories (Luke 11:51).

Now that I have briefly discussed four reasons for reading Genesis 1-11 as history, I turn to four misperceptions about Genesis 1-11, which might lead some to view it as myth.

1) The presence of symbolism and “deeper” meaning does not exclude historicity. Good students of Scripture will readily admit that Genesis 1-11 (indeed all Hebrew narrative) is rich with symbolism and theological truths. The Tree of Life symbolized eternal life in the New Heavens/New Earth (Revelation 22:2), yet that does not mean there was no actual Tree of Life. Genesis 3 clearly teaches theological truths about the entrance of sin into the world resulting in pain, suffering, and death – but that does not mean that Adam, Eve, and the serpent are all fictitious.

In a very real way, Genesis 3 tells us why marriages are broken, why friendships end, and why your boss treats you unfairly. But the theological truth it teaches in no way undermines the historicity, in fact, it depends upon it. This is how Hebrew narrative works – it is not written just so that its readers can know “the facts,” it has a theological purpose as well, but that theological purpose is not at odds with the historicity of the narrative.

2) Miraculous occurrences do not mean the account was meant to be understood as myth. The first chapters of Genesis are full of things that rub the “sophisticated sensibilities” of modern man the wrong way, such as a talking snakes, nine-hundred year lifespans, a universal flood with every kind of animal on one boat, and men building a tower to heaven.[4] For the atheist these things are understandably outside his worldview, but for the original author and audience they fit quite well within it, because they believed in the God of the Bible.

However, for those who call themselves Christians and yet feel pressure to rationalize away these stories – why not do the same with the resurrection of Jesus? If you accept His resurrection (the greatest miracle of all), then in principle you cannot rule out the supernatural from the rest of your worldview and the Bible. Once you allow that God exists and actively engages in the world than you cannot a priori determine what he can and cannot do – if He wanted to march animals two by two onto an ark that is His prerogative.

3) Careful construction does not equal a fictitious account. Though better biblical scholars do not make the claim, some who do not know the Bible well may claim that the beginning of Genesis is poetry and therefore ahistorical. To this we answer first, that even if it was poetry that would not necessarily imply ahistoricity (cf. Psalm 105-106). Second, Genesis 1-2 are not poetry. They are lacking the most basic feature of Hebrew poetry: parallelism. Read Psalms and Proverbs and compare them to Genesis 1-2 and you will see what I mean. However, more sophisticated biblical scholars might claim that the parallelism between the genealogies of Genesis 4 and 5 or 10 and 11 indicate that they are ahistorical. The authors have “cooked the books” so to speak and manufactured history for their theological agenda.

To that I answer that selective history does not equal false history. No historical account can be exhaustive and certainly Genesis does not claim to be. Simply because Moses recorded the genealogies in Genesis 4 and 5 in such a way as to encourage the reader to compare and contrast them does not mean that the genealogies are ahistorical. Take the genealogy in Matthew 1 for example. Matthew carefully constructed his genealogy into three sections of fourteen to emphasize Jesus as the son of David (whose name in Hebrew equals 14) and yet clearly intended his readers to understand it as historical and factual. Careful construction does not equal fiction.

4) Lastly, engagement with pagan myths does not mean the Bible is a myth. In the past century or so comparative religion has arisen as a large discipline in the field of biblical studies. With recent archaeological finds, scholars have access to many of the myths of the pagan nations surrounding Israel. In some instances, those myths contain striking parallels to the biblical accounts of creation and the flood. Some scholars conclude that the Bible’s stories are nothing more than stitched together accounts plagiarized from the surrounding nations. But that is not the only explanation, the presence of error does not imply the absence of truth.

In a similar way to how Tolkien and Lewis defended the resurrection of Christ against those claiming it was just a Christianized version of some pagan myth, we may note that if the biblical account of creation and the flood is true then we would expect to find distorted versions of it in other nations and cultures. There is no reason to assume that the creation and flood accounts were wholly unknown before Moses, and it is reasonable to expect that from Adam they would have been handed down, generation to generation. In the case of the line of Cain (and later Ham) who separated himself from the people of God and the true worship of God, we would expect the stories to be changed and distorted as they conformed to the pagan idolatry of the people.[5]

This is important. If you dismiss Genesis 1-11 as myth you dismiss the very foundation upon which the rest of the Bible is built. The redemptive history is dominated by the first and last Adams. The story of the Bible is the outworking of Genesis 3:15. If you abandon the historicity of the beginnings of Genesis you are left with serious theological problems, such as, “Where did sin come from? Is it essential to humanity? Did God create a sinful world?” Genesis answers these questions, but if you abandon Genesis, the questions still remain. But don’t just take my word for it. Whether you agree or disagree with me, my article only scratches the surface of the issue. Read about these things. Study them. Talk to your pastor about them. And above all, study what Genesis actually says, it is its own best defender.

[3] Obviously I cannot engage in a full exposition of the theology of Genesis here, for that I heartily recommend the reader to Dempster, Stephen G. Dominan and Dynasty: A theology of the Hebrew Bible. Downers Grove: InterVarsity Press, 2003.

[4] Though the tower of Babel was most likely a ziggurat, an ancient near eastern structure that intended to be a house for the gods, not a tall tower by to physically climb into heaven.

[5] For more on comparative religion and the Bible’s use of pagan mythology I recommend John Currid’s little book, Against the Gods. 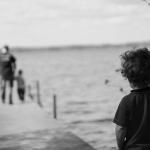 January 11, 2019
The Marriage of Covetousness and Discontentment
Next Post 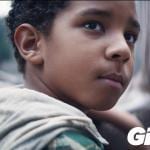 January 23, 2019 The Real Brilliance of the Gillette Commercial and Why You Should Ignore It
Recent Comments
11 Comments | Leave a Comment
"Paul? Respectfully, Paul got nothing wrong because he said no such thing. Paul in fact ..."
BeABerean On The Chosen: Jesus Is Not ..."
"I don't typically agree 100% with Grayson because I think he can be a bit ..."
BeABerean On The Chosen: Jesus Is Not ..."
"History must always be rewritten, though with attention to evidence, one's own biases, and the ..."
Jerry Summers In Which Kristin Kobes Du Mez ..."
"He pretty clearly believes, as I do, that LGBTQMRMXYZPTLK practice is sinful, and that we ..."
NorrinRadd In Which Kristin Kobes Du Mez ..."
Browse Our Archives
Related posts from The Chorus In The Chaos 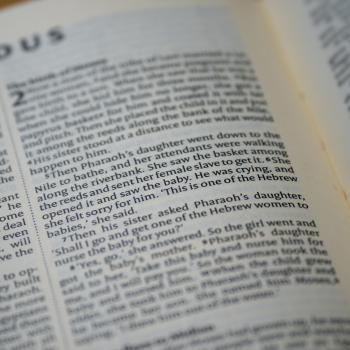 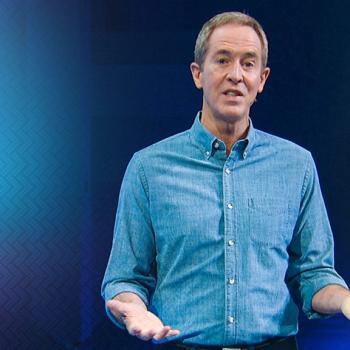 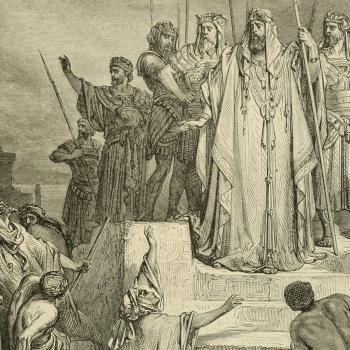 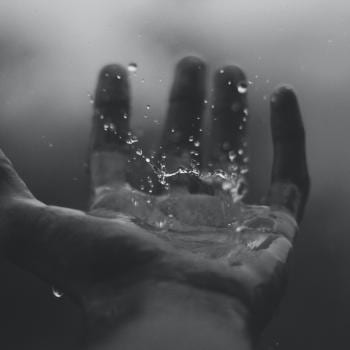 Evangelical
The Gospel in Genesis 6:1-8
The Chorus In The Chaos
TRENDING AT PATHEOS Evangelical