Sometimes, it is easy to forget that Christians are a people whose reason for being is built on a message of good news.  If you talk to the average evangelical, or read their posts on Facebook, it often feels as if they are a people who are purveyors of bad news. The economy is in shambles, the President is doing a horrible job because he is a Kenyan socialist, gay people are ruining the country, our civil liberties are being stolen from us, the American court system is embracing Sharia laws, and they are embracing Sharia law because the Muslims are taking over the country…with the gay people. Also, global warming is a scam. (I think that last one may be good news, though. Can I please have my old freon back now?)

Admittedly, there is a great deal of the Bible that can make one a bit pessimistic if proper focus is not maintained. The depravity of mankind is pretty horrible. The fact that no one is righteous, no not one, is a very sad commentary on the human condition (Romans 3:10-18). So if you have a biblical view of the condition of man as corrupt, and your eschatology teaches you that everything is going to go from bad to worse until Jesus comes back, and if everywhere you look seems to indicate that we are slip-sliding into Sodom, then no wonder evangelicals walk around in a kind of perpetual state of indignation. Everyone and everything seems to be going straight to hell, and nobody seems to care. Billy Graham even said that half the people in church aren’t really saved! If half the church isn’t saved, how horrible a place must the world outside be?

With all that kind of stuff floating around in our heads and on our Facebook page, it is no wonder that evangelicals might be given over to despairing of culture and cynical towards any attempt to make things better in a ‘secular’ way. I also confess that between the effort to safeguard religious liberty, the struggle over important issues like abortion, and the fact that we are in a slumping economy, a person can get worn out. And the fact is that without the gospel, our neighbor will perish. But to give in to cynicism is utterly unbecoming of the church of Jesus Christ.

There are some true and difficult issues facing our country right now, as there has been in every generation since the fall of mankind. So how do we keep from falling into that trap of despair? I know it sounds trite, but the church has to keep the gospel of Jesus Christ before her eyes all the time to keep the harsh reality of a fallen world from making her jaded. Paul said it like this, ” For I am not ashamed of the gospel, for it is the power of God for salvation to everyone who believes” (Romans 1:16). Evangelicals usually emphasize the “I am not ashamed” part in order to boost their own sense of commitment, which is a sneaky form of pride that got Peter in trouble ( Matthew 26:33). Rather, the emphasis ought to be that the gospel is the power of God.

Church, the good news that makes us who we are is the power of God. The thing that has the real power to change the culture is the crucifixion of Jesus for the sake of a wretched people. What gives us joy in the midst of a wicked and corrupt generation is the fact that this same Jesus, who died for us while we were children of wrath just like the rest, rose from the dead and is now seated at the right hand of God and is, at this very moment, interceding for us.

So this year, when you are tempted to despair over the economy, depravity, the liberal media, or whatever the passion of the moment is, remember that your joy is in the Gospel. Remind your friends in church about this when they grouse about things. The Gospel has the power to change the culture. It has the power to change the most savage opponent of the cross. And how do we know this?

Because it changed you. 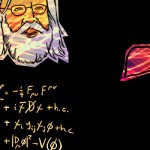 August 14, 2012 Higgs Boson and the Goodness of Scientific Discovery
Recent Comments
2 Comments | Leave a Comment
"Radford made a connection between Ender and Hitler.Another possible connection: Could Card have been referring ..."
Raymond Z ‘Ender’s Game,’ Genocide, and Moral Culpability
"Faith is the confidence that what we hope for will actually happen; it gives us ..."
Smiley M.M. Music Matters: David Bowie, Still Not ..."
""that many of us do not accept that a few cells of human DNA constitute ..."
myintx How I Changed My Mind About ..."
"No thought given to the unborn child whose life was 'silenced and oppressed'... sad."
myintx How I Changed My Mind About ..."
Browse Our Archives
get the latest from
Evangelical
Sign up for our newsletter
POPULAR AT PATHEOS Evangelical
1

Are COVID-19 vaccines made from aborted...
Adrian Warnock
Related posts from Christ and Pop Culture

What Is "The Church?"
What Is “The Church?” Of course this question—What Is the Church?—is far...
view all Evangelical blogs
What Are Your Thoughts?leave a comment
Copyright 2008-2020, Patheos. All rights reserved.