The Moviegoer: Looper, Selfhood as Travel Agency, and Intergenerational Responsibility

A Special Note from the Future: Hey moviegoer who hasn’t seen LOOPER. This is your Future Self. You’re about to read this column without having seen the film. Trust me:  you’re going to regret this decision. I’m still mad at you. Do us both a favor and see the film, and THEN read this wordy guy’s spoiler-filled column. It’s not set in stone yet! You are free! Make the responsible choice!

Two men sit across from one another in a diner booth. There’s a striking resemblance between them. One is older, aged by the experience of sadness, regret, and addiction. Preceding decades—each moment, day, and year in itself—have molded him into the gruff, burdened man that he is. And, yet, time also seems to have had a humbling effect. Facing him is a younger man who is hardened, cynical, and selfish enough to have betrayed a friend for money—for the hope of a future you might say. This younger fellow has not been schooled by experience, save for memories of lost parents. The older man tries to warn the younger that his self-absorption will only cripple him in the future, but the young one will have nothing of it. In fact, in a savory bit of irony, he has a gun aimed under the table, even as the older man seems a few steps ahead of him. Joe—the older and the younger—is in trouble, and neither the wisdom of experience nor the dead-eyed confidence of youth can save him.

But we’re getting ahead of ourselves. Let’s rewind a bit. The year is 2044, and the United States is in a state of decay. Social structures have collapsed, and organized crime has infected the landscape. Yet, post-economic apocalypse America is not without some interesting evolution in human capability. A small percentage of the population has experienced the effects of a mutation which gives them measured telekinetic powers; in these beleaguered times, levitating small objects is relegated to cheap attempts at making an impression. It seems deprivation has a corrupting effect on the imagination as well. Only time will tell if the powers will be used for something more—whether creative or destructive.

Or do we already know? Thirty years into the future, time travel has been invented, and outlawed. That future has an unprecedented force of crime. It’s a force that has a need for time travel in order to dispose of unwanted individuals cleanly. Young Joe (Joseph Gordon Levitt) is a looper. Crime lords from the future send people they want killed to the past to be disposed of by loopers. The operation is run by Abe (Jeff Daniels), a menacing fellow who is also sent from the future to keep a grisly reign on the murderous business. To make the time travel situation more bleak, when the crime bosses want to end a contract with a looper, they send the older looper’s self back to be killed by the younger self. Called “closing the loop,” the time-spatial suicide gives the looper retirement-inducing cash and about 30 years to live. If he doesn’t kill his older self, the younger self is going to die much sooner than anticipated.

Back to the diner scene, which is one of the film’s best and most pivotal, marking a significant, surprising transition in both setting and tone. How the film builds to the moment—the way in which it gives you the perspective of young Joe, and also a brilliantly set-up, engrossing 30 year montage perspective of old Joe—lends the scene a gravitas that goes beyond the tension of whether or not young Joe is going to kill his older self (Bruce Willis). The scene is defined more by the inherent tension of human agency—in how the past and future coalesce into the ever-progressing present. Young Joe sees who he’s going to become, while his older self, with the gulf of choices that lies in between, reflects on who he was with revisionist wisdom. As they stare at one another eye-to-eye, all of the inherent paradoxes of time travel are laid to rest, if only for the moment, as the classic sci-fi device is rooted in the sense of selfhood that says being is becoming.

Here’s what present and future Joe share in common: the loss of parents at an early age, the self-deterioration committed against the (future) self in acts of brutality against the future, and, to cope with this decline, a drug addiction that is equally degenerating. What Joe’s story embodies—and what the film consistently hints at with other characters—is a subtle commentary on intergenerational responsibility. Our present choices don’t just affect our future selves; our current collective choices also affect the people around us which form the future generation. Johnson localizes this tension in the parent-child relationship, but, as if to raise the stakes, future Joe has come back to kill a child. It turns out all of the loops are being closed because a myth-like force of evil called the Rainmaker is taking control of future organized crime. Old Joe wants to kill the child who will become a ruthless killer, taking away a romantic form of gracious redemption in his life.

Without giving away too much of the second half of the film, suffice it to say that young Joe—the film itself—settles on a scenic farm with a troubled, persistent mother named Sara and her even-more troubled, but still lovable, child named Cid. What the first half of the film has in a visually precise, unrelentingly cruel city, the second half has in a visually pastoral, increasingly hopeful farmland. As the story becomes more entrenched in a visually meditative setting, Joe becomes more self-reflective about what is being wrought by his decisions. It’s a formal move that effectively challenges genre expectations, and complements narrative ambitions to keep the viewer totally engrossed and unsuspecting.

And so what begins as a sharp, conventional thriller slowly becomes something unexpectedly affecting. Young Joe sees a mother desperate to remain committed to the well being of her troubled child, and he also sees a child, despite reservations about her, willing to defend his mother against attackers. The former is a parental care that Joe lost at an early age; the latter is a responsibility he’s failed to keep for his best friend. This sacrificial commitment between mother and child—between one generation and the next—begins to affect Joe. The first sense of awakening in Joe’s conscience and motivations seems to coincide with what we see as a visually horrifying and meditative shot, a cue that the future is soaked with blood. It’s a shot that evokes deep sorrow and sympathy for the plight of others—and for the innocence we’ve lost collectively.

In one of my favorite lines of the film, Cid asks his mom if Joe is good. To which she responds, “We’re going to see what he is.”

The end of Looper is morally complicated, but, ultimately, strikes a powerfully hopeful, self-denying note which is framed resoundingly by an implicit question: how do we break the loop that is the vicious cycle of violence? As I sat beside my wife and thought about our young son, I was a wreck during the last 15 minutes. I wanted to go home and tell our son that we’re there, and offer him that most comforting form of time-travel reassurances: God willing, we’re going to be there. In the few hours after my first viewing of Johnson’s film, I had a particular kind of excitement that moviegoing doesn’t often elicit in me. I felt giddy about what I’d just seen. It was a feeling that took me back–had me feeling like a kid again. 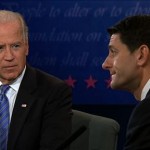 October 12, 2012 Civil Discussion: Mad Biden, Slick Ryan, and the Debate of Increasing Polarity
Recent Comments
5 Comments | Leave a Comment
"Radford made a connection between Ender and Hitler.Another possible connection: Could Card have been referring ..."
Raymond Z ‘Ender’s Game,’ Genocide, and Moral Culpability
"Faith is the confidence that what we hope for will actually happen; it gives us ..."
Smiley M.M. Music Matters: David Bowie, Still Not ..."
""that many of us do not accept that a few cells of human DNA constitute ..."
myintx How I Changed My Mind About ..."
"No thought given to the unborn child whose life was 'silenced and oppressed'... sad."
myintx How I Changed My Mind About ..."
Browse Our Archives
get the latest from
Evangelical
Sign up for our newsletter
POPULAR AT PATHEOS Evangelical
1