Michael Jackson’s “Thriller”: 30 Years of Fear (but Fear Not)

Matthew Linder examines the continuing cultural legacy of Michael Jackson’s Thriller, and its themes of paranoia and fear.

The defining album of the ’80s, Michael Jackson’s Thriller, celebrates its 30th anniversary on November 30, 2012. For those of us who grew up in that decade, Thriller was our Sgt. Pepper, our Pet Sounds, our Dark Side of the Moon. To this day, it remains the best-selling album of all time: it’s estimated that over 100 million copies have been sold worldwide to date. Jackson was at his best during Thriller’s reign, winning eight Grammys and spending 80 weeks in Billboard 200’s top ten, with 37 of those weeks at number one. Amazingly, seven of Thriller’s nine songs were released as singles, and all seven charted in the top ten (a record only recently matched by Katy Perry’s Teenage Dream album). The album forever changed the landscape of pop music and made Jackson the “King of Pop”.

It would have been surprising if Thriller hadn’t been a success given that it had Quincy Jones at the helm and featured collaborations with a former Beatle (Paul McCartney), the world’s greatest living guitarist (Eddie Van Halen), the king of horror (Vincent Prince), and a best-selling ’80s band (members of Toto played on several tracks). Also, it was deliberately structured to include a cross-section of styles (e.g., R&B, funk, rock, soul, disco, pop) to appeal to a mass audience.

As if the album’s creativity wasn’t enough, Jackson redefined the music video and helped transform the then-16-month-old MTV network into a cultural juggernaut. Beyond “Beat It”’s endlessly copied Broadway-style dance numbers, the title track’s video transformed the medium from fringe promotional item to engaging short film. “Thriller”’s video continues its eminence today and has become so deeply ingrained in the global cultural psyche that re-creations of its iconic dance moves continually reappear in various forms, e.g., Filipino prisoners, Jennifer Garner in 13 Going On 30, and most recently, Faith Church in St. Louis (in the context of the power of positive thinking — frightening indeed).

Success, innovation, and cultural influence aside, critics have noted that Thriller feels very much like an album of singles instead of one with an over-arching narrative. Containing a multitude of lyrical subjects (mostly offering varying perspectives on love) and mash-ups of disparate musical genres, Thriller seems to have little internal cohesion. Opening with the frenetic funk of “Wanna Be Startin’ Somethin’” and moving through sappy R&B, metal-tinged rock, synthesized soul, and early ‘80s disco, there’s something for everyone to enjoy, but the intra-song connections are minimal. However, there is one theme that underscores, in both subtle and overt ways, each song on the album: paranoia.

Paranoia Will Possess You

Lamentably, Michael Jackson had a long struggle with paranoia and its first signs appear on Thriller. It subtly emerges in “The Girl is Mine”’s gentle tug-of-war, where he hesitantly fights McCartney (“Paul, I think I told you, I’m a lover not a fighter”). Then there are the stalker-like lyrics and stuttering rhythms of “Human Nature”, where he sings “Electric eyes are everywhere/See that girl/She knows I’m watching/She likes the way I stare.” “Beat It” reveals more overt paranoia couched in a sermon against gang violence (“They’re out to get you, better leave while you can/Don’t wanna be a boy, you wanna be a man/You wanna stay alive, better do what you can”). However, it’s the trifecta of “Wanna Be Startin’ Somethin’”, ”Billie Jean”, and “Thriller” that contains the clearest embodiment of Jackson’s paranoia.

Album opener “Wanna Be Startin’ Somethin’” sets Thriller’s tone with its frantic pace encapsulating the lyrics’ elevated anxiety. Jackson’s vocal pushes forward while the band (and especially the guitarist) struggles to keep pace, as though Jackson can’t hold back his distress any longer. There’s a sense that Jackson feels trapped (“You’re stuck in the middle”) and that he’ll be metaphorically eaten alive (“You’re a vegetable/Still they hate you/You’re just a buffet/They eat off of you”). But this line lies at the heart of Jackson’s paranoia: “Billie Jean is always talkin’/When nobody else is talkin’/ Tellin’ lies and rubbin’ shoulders/So they called her mouth a motor.” Here, he mentions a character who returns in her own song, acquiring deeper significance.

The minor-inflected, stripped down instrumentation of “Billie Jean”, accompanied by Jackson’s increased use of his signature vocal hiccup, create a musical landscape where his panicked voice draws the listener into a fear-laden world. In the song’s plot, Jackson has become entangled with a woman who now claims that her child is his, something he vehemently denies (“The kid is not my son”). Regretfully, he reflects on his mother’s advice (“Be careful of who you love and be careful of what you do ‘cause the lie becomes the truth”). Furthermore, Jackson is apprehensive toward Billie Jean and her “schemes and plans” because the “law was on her side.”

“Billie Jean” finds Jackson unsure how to escape the false claims of another human looking to destroy him and his public persona, but it’s the title track that finally exposes the source of Jackson’s fears. “Thriller” begins with the sound of a creaking door, a sonic clue that something will be unveiled, i.e., the spiritual reasons for Jackson’s hyper-suspiciousness of others.

His vocals begin, not with words, but with a frightened yelp, revealing Jackson’s fearful state as expressed in the first line: “It’s close to midnight and something evil’s lurking in the dark.” The horror movie apparitions in the lyrics are visually perceptible “terrors in the night” but they also hint at the deeper internal suffocation that Jackson feels is crushing his heart: “They’re out to get you, there’s demons closing in on every side/They will possess you…” Vincent Prince’s voice-over at the end re-emphasizes the primal fear of what Jackson sees as the regrettable ultimate end of this possession: “Grisly ghouls… are closing in to seal your doom.”

The Fear is Mine

Thriller exemplified Jackson’s personal paranoia, but it also reflected the fear many people felt during the early Reagan years. The album came out at the height of a recession with an unemployment rate of 10.8 percent and an increasingly tense “cold war” fought through various proxy countries (see Reagan’s “Star Wars” program and the arming of Afghanistan through Operation Cyclone), and it was released less than two years after the United States’ first encounter with Islamic terrorism, the Iran Hostage Crisis.

Today, we live in similar conditions. We’re in a recession achieving nearly the same unemployment levels as the early ‘80s, we’re fighting a war with our former Reagan Doctrine allies in Afghanistan, and in a post-9/11 world, we are constantly on alert regarding Islamic terrorist threats at home and abroad. These are all legitimate concerns but on top of them, we also have a media that perpetuates, exploits, and even manufactures fears.

For example, news outlets have spent a disproportionate amount of the last few months on the December 31, 2012 expiration of numerous tax cuts, calling the event “Taxmageddon”. Their method for instilling heightened anxiety in the public is to relate the story within the framework of apocalyptic language. The Huffington Post‘s Mark Steber told his readers that the prophesied Mayan apocalypse would be preferable to Taxmageddon’s doomsday scenario. Elsewhere, The Albuquerque Journal‘s James R. Hamill compared the event to a Martian invasion and compared Congress to sinister otherworldly beings.

“World ending” tax hikes aside, we experience many fears in this world. For Michael Jackson, life under the law of paranoia (as ingeniously portrayed on Thriller) ended up sealing his doom. Jackson heartbreakingly coped with his ever-increasing paranoia by taking anti-anxiety medication, antidepressants, and the anesthetic propofol. This proved to be a deadly mixture that ended his life on June 25, 2009, an unfortunate departure for a brilliant musician ensnared and defeated by his fears.

For Christians, our fears range from the personal to the corporate as we ask ourselves: Will I be able to make my mortgage payment? Is President Obama “going to ruin America and take away our religious liberty for good now?” Will illegal immigrants take over our country? Will the U.S. soon go to war with Iran over a cyber-attack? Each one of these scenarios can easily leave us consumed with paranoia akin to what Michael Jackson experienced. However, God’s desire for His people is not to fear the ephemeral things of this life but rather, to live under the reassurance of His loving command to “Fear not, for I am with you” (Isaiah 41:10).

The troubling example of Jackson demonstrates that fear only brings condemnation and death. However, as Christians, we “did not receive the spirit of slavery to fall back into fear, but [have] received the Spirit of adoption as sons, by whom we cry, ‘Abba! Father!’ The Spirit himself bears witness with our spirit that we are children of God, and if children, then heirs — heirs of God and fellow heirs with Christ, provided we suffer with him in order that we may also be glorified with him” (Romans 8:15-17).

This is the hope that Jackson desperately needed and one that we as Christians should live by instead of giving dominion to our fears.

Matthew Linder is married, a father of a 2-year-old daughter, a music professor at National University and University of Phoenix, and a blogger.  He loves Jesus, the Church, biblical theology, and of course, music but despises ketchup. While he appreciates a wide variety of musical styles, he prefers hip-hop, metal, and classical but could live without 90s Christian music. Follow Matthew on Twitter @TheRetuned or at his music blog www.theretuned.com. 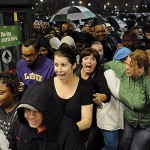 November 21, 2012
Science Explains Why We Love to Suffer on Black Friday
Next Post