“If I have any hope, it’s hope that Obama wants to be known as someone who can unite people and solve big problems.”

It’s a special early-in-the-week edition of Civil Discussion! Ben and Richard spent all night and some of the morning emailing back and forth as history unfolded before them.

Richard: Ben! Isn’t this exciting? This is the night when everything we’ve been through over the last few years will coalesce and finally come to a conclusion. And also start over again, inevitably, in like a year or so. Isn’t that exciting???

More importantly, you voted, right? You didn’t let those nay-sayers stop you with their ho-humming about the electoral college and how voting in Kentucky means nothing, did you? Even more importantly, did you get an “I Voted” sticker? Cause I totally didn’t! This is an outrage!

Ben: I’m playing videogames and reading tonight. I don’t really like watching election results. With the single exception of Bush v. Gore, you always know the winner the next day so there’s no great reason to find out the second it’s been decided.

I did vote, but like you I didn’t get a sticker.

It bothered me greatly that I get to have a say in things like, “county soil and conservation board” elections. You know what I did for that one? I picked the people with names that sounded like they were close to the soil. Names like Farmer and Thornhill.

Then, on the school board election, I picked the people on the bottom of the ballot because I know most voters tend to vote for the person in the top slot when they don’t know what to do, so I thought I’d provide some counterbalance. Isn’t democracy amazing?

One final note. Kentucky was going for Romney no matter which way I voted. So that’s exciting.

Richard: Ben, the reason you watch the news the night of the election is because it’s like watching a real-life strategy game playing out before your eyes. And the hilarious thing is everyone’s all like “What Romney needs to do now is…” and Romney’s watching at home going, “Well guys I’m not going to do anything, because I’m sitting on this couch eating Doritos.” Or caviar or the heads of poor people or whatever it is Romney eats.

I left all of those weird things on the ballot that I didn’t know anything about blank. Is that okay, or am I no better than Nick Rynerson now?

Oh also, we got to vote about whether hunting is cool or not. Did you vote for hunting, Ben? WELL DID YA, CITY BOY?!?!?

Ben: I must confess to being confused about the hunting vote. (Headline: Confusion reigns on local man’s ballot!) Why do we need something like that added to the constitution? In the end I voted yes because there are way too many deer in this state and they need to be thinned out, so I say have at it.

As for watching the election as it happens, when I was in 6th grade, I participated in a math reasoning competition with 30 other schools. I took the test and felt pretty good about it, but there was at least one I knew was wrong. I didn’t sit around and say, “Well, now I just need the chubby kid to get confused on question three, and I need the bored looking girl in the third row to have not paid attention to the wording on question seven…” Nope, I drank a Coke and read a book. And guess what? I won.

But I’ll give you this: there’s a certain drama to the events because it does have a significant impact on the next four years in governance. How do you think people will react if Romney wins? Obama?

Richard: Hey now, let me clarify: I did vote in many of the local things, just not the ones I had literally no clue about. I figured I’d do more damage if I picked the person who had the best name or whatever. You can’t honestly tell me that voting randomly is better than not voting at all.

Also I’m sorry but what is this about a math test? What are you going on about? You’re smart, we get it.

Either way there’s going to be a lot of bummed out people, I think. It’s not like last time, when we could all go, “Oh, okay well at least we made history and we can all feel good about ourselves not being racist.” That was a pretty big check to the kinda knee-jerk depression a lot of people feel after their guy loses.

Still, if Romney loses, we can kind of claim we saw it coming and blame it on a bunch of dumb stuff Romney did. If Obama loses, I think some people will be genuinely shocked and surprised.

Ben: I sure would. It’s been a while since we had a one-term president.

That reminds me, I heard an amazing statistic today. The last time the Republican party won a presidential election without a Bush or Nixon on the ticket? 1928. You’d think that in an age of growing population and easy access to information, we’d have a lot more diversity and turnover among our leaders. Why do you think we are so comfortable with what we know, rather than trusting that there are plenty of people out there with the talent and energy to be President?

Richard: Fear of the other? It almost undid Obama in 2008, and even Romney’s Mormonism and Rich-guyism is a kind of otherness than many Americans are simply uncomfortable with.

A key development from tonight: both Akin and Mourdock lost. Not really surprising, but not exactly a sure thing either. But it looks like the people has spoken: they’re not super crazy about old white dudes saying awkward things about rape and abortion. One of many lessons the Republican party could learn from this campaign season.

Ben: Ugh, no argument here. My biggest fear, if Romney wins, is that Republicans will feel validated. What a horrifying thought.

Fear of the other is a real problem, but at the same time we need alternatives to start imagining what could be. And if President Obama has shown us anything, it’s that even one of the most transcendent political candidates in history eventually gets bogged down in the politics of the office. Effective governance isn’t going to happen through sweeping electoral victories by one party or the other. It comes from a couple of people in the center, making responsible compromises for the sake of the country.

There’s something special about a final term, right? He can do whatever he wants now, right? He’s going to ruin America and take away our religious liberty for good now, right? Or make America a place of hope like he promised? PLEASE BEN, TELL ME SOMETHING IS GOING TO FINALLY HAPPEN.

Also can I go to sleep now?

Ben: Go to sleep. We all want good things to come. Will political change actually happen now? Unlikely. But one can always hope.

Richard: Ben, good morning! Does it feel like a new day somehow? Or just the beginning of four more years of the same?

I made the mistake of staying up until 2 am watching the concession and victory speeches, and I have to say, they did make me feel a bit more hopeful. I know that these speeches always feel nice and fuzzy and talk about working together, but I still don’t think anyone really expected it from the loser after the kind of insanely contentious race this has been (remember when the entire nation thought our two presidential candidates were about to get into a fist-fight during one of the debates?). And Obama seemed to focus big time on working across the aisles. It’s hard to tell from speeches of course, but I felt pretty good about bipartisanship after last night.

Ben: It only feels like a new day in the sense that every day is a new day. In terms of politics, not so much.

That said, one interesting thing about second-term presidents is that they stop worrying about the next election, and instead tend to focus on their legacy. If I have any hope, it’s hope that Obama wants to be known as someone who can unite people and solve big problems. To do that, he’s going to have to be a lot smarter and more collaborative about his interactions with Congress. Here’s hoping that self-interest wins the day! 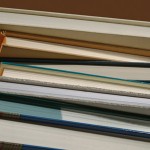 November 7, 2012
The Paralysis of Having Too Many Cultural Choices
Next Post

November 7, 2012 10 Ways to Detox from the Election
Recent Comments
3 Comments | Leave a Comment
Browse Our Archives
get the latest from
Evangelical
Sign up for our newsletter
POPULAR AT PATHEOS Evangelical
1

On the Pope's Endorsement of Same-Sex...
Cranach
Related posts from Christ and Pop Culture