The Moviegoer: ‘Margaret’ and the Difficulty of Responding to Life’s Traumas

There’s a recurring scene in Kenneth Lonergan’s Margaret that may recall for you memories of high school Civics (or Literature or History)–any class that fostered student interaction constituted by almost unmediated opinion-giving. If your experience is like mine, then you’ll probably remember moments of heated, barely educated back-and-forths in which each *side* of a complicated argument launched rhetorical attacks with all of the bluster and surety they may have heard at the family dinner table or on entertainment-driven news. Lonergan stages this kind of interaction appropriately as a loud, self-assured, and racially charged confrontation. And the ugliness of these confrontations is not necessarily because of the opinions themselves, though it’s often that too, but because of a tacit adolescent motivation (of course, one could say that many “adults” remain stuck in “adolescence”–and this is significantly implied in the film).  The motivation underlying many of these kinds of arguments is the desire to justify one’s self in the eyes of others, a desire that often becomes a ferocious, self-destructive pursuit.

There’s a particular angst associated with the coming-of-age, wherein increasing knowledge of life’s harsh realities tempt us to pursue any means necessary in positioning ourselves as important and validated–never part of the problem, but a victim with a solution. Along this line of thought, any response to the person who is perceived as essential to the problem or supporting the source of the problem–often the scapegoat of the moment–becomes not only feasible, but acceptable. In part, this is the chaos of adolescence: in our quest to become comfortable with ourselves, in the midst of our increasing awareness of a discomforting world, we feel the need to position ourselves in contrast with others through manipulative power-plays. Emotionally, we struggle to negotiate and navigate the challenges of the “adult world” heretofore kept from view as much as possible. Put those civics debate classes in the context of a traumatized, post 9/11 America, or, better yet, conceive of post 9/11 America as a metaphorical  teenager who responds to the burdens of a cruel world with a mixture of healthy fear and anxiety and unhealthy, if understandable, self-absorption. What you have is Lonergan’s ambitious film, which, for better or worse, takes on the disheveled quality of its protagonist, Lisa Cohen (Anna Paquin).

We first see Lisa in her private school classroom. In a relationship that from the beginning has an unspoken, flirtatious vibe, Lisa and her Math teacher, Mr. Aaron (Matt Damon), have a see-me-after-class meeting to discuss her underachieving tendencies. During a conversation that foregrounds the story, Lisa complains–in a manner of word and tone that feels authentically teen–that she won’t use these concepts in real life. Mr. Aaron’s best explanation is to suggest that we often find ourselves in a new, difficult situation, but that afterward, we come to develop a “new set of skills and experiences along the way.” This is all foreign to Lisa as an adolescent whose most significant hardship has probably been her parents’ divorce, and the effects of her enduring it have probably not crossed her mind, let alone become perceivable. Lonergan allows all of this to change in an early fateful scene that defines the rest of the film. Trying to catch the attention of a bus driver named Gerald (Mark Ruffalo), Lisa runs alongside the bus, waving at him to ask about his hat. Open to the distraction, Gerald takes his eyes off the road long enough to run through a red light and over a woman in the crosswalk. In a properly brutal scene, the woman dies in Lisa’s arms.

Immediately after the accident, Lisa is interviewed by the police, and, in the background, Gerald watches with seeming curiosity as to what the 17 year old is going to bear witness to regarding the circumstances. Knowing that it was a red light and perceiving a watchful eye from Gerald, Lisa says, in a bit of a panic, that it was green, and that she believes it was purely an accident. Eventually, Lisa projects her sense of guilt onto the bus driver by pursuing a wrongful death case with all of the wrongful verve of a person trying to obviate guilt without a willingness to accept any culpability. She’s less focused on finding justice for the deceased, and more wrapped up in the shocking reality that the world isn’t going her way. From the immediate aftermath of the accident, two important, parallel dramas are set in motion: the drama of Lisa’s stress stemming from both the emotional trauma and the guilt she feels, and the drama of whether the adults in her life are equipped to orient her in this new state of psychological damage. Part of how the film unfolds is in that these parallel dramas ought to cross paths at some point in a way that brings healing to Lisa’s situation, but, instead, her evidently self-destructive response to this new stage in her life is more often left unimpeded or made worse.

It’s likely that you’ve never heard of Margaret, and that’s no slight. Notoriously, Margaret had significant post-production problems that centered on a battle over editing. The producers wanted a 150 minute or less film, and Lonergan’s vision was something closer to three hours. The film was shot in 2005, but didn’t see the inside of a theater until 2011–and in seemingly an even more limited release than the typical limited release. Earlier this year an extended edition was released (since Netflix only seems to have the theatrical version, that’s the one I’ve seen). While I’m eager to watch the director’s cut to learn more, I’m also struck by the fact that the theatrical version seems less discombobulated than what I’d expected. The third act seems a bit uneven, but, for the most part, I agree with Mike D’Angelo that often the film’s messiness isn’t derived from the much discussed production problems, but is instead qualitative of its narrative content. Further, I agree with D’Angelo that certain scenes that seem unnecessary on a surface level actually serve the seemingly intended purpose of decentralizing Lisa from the way in which teenagers often think themselves the lead that the world revolves around.

All the more interesting is that Margaret was written between 2000 and 2003, and Lonergan has said in interviews that 9/11 affected the script “quite a lot.” The opening of the film is comprised of slow-motion shots of new yorkers busily walking the streets; and, throughout the film, there are montages of new yorkers (and of Lisa as fundamentally part of that crowd), skylines, and even airplanes flying just above the skylines. These recurring montages are set to soulful music with notes of both sadness and compassion. And, notably, the topic of the film’s most heated high school class debates is often 9/11. So it’s interesting how Lonergan explores the possibility of explosive and self-destructive responses in the aftermath of traumatic events, particularly as a director who expressly finds Oliver Stone’s it’s-all-America’s-fault approach thoughtless. It would be a mistake, I think, to read a 9/11 analogy into every development or gesture in the film, but, undoubtedly, it looms in such a way as it would have on a subconscious level for most new yorkers in the years immediately following the attacks.

Lisa’s divorced, single mother has her own preoccupations–particularly a new boyfriend–but most importantly she’s a stage actress. Indeed, the film is filled with literary references. In what struck me as the film’s most significant interaction, the victim’s closest friend–who is teaming up with Lisa in pursuit of the wrongful death case–explodes on the burdened drama queen by saying that life isn’t a drama in which she’s the center of attention. And, ultimately, much of what happens to Lisa isn’t her fault–both in the sense that tragedy can evolve from seemingly innocent circumstances, and in the sense that those around her are not providing the supporting roles she needs.

Margaret, then, is essentially about insecurity. As a nation, and as individuals, we will inevitably be confronted with varying traumas that render us neurotic and vulnerable. Adults can become cold to traumas and insecurities as the way things are. But the question remains, then, in discovering how we can emerge from our traumatic experiences with a stabilizing force–a personified grace, you might say, that can heal us of our wounds, both self-inflicted and inflicted by others. It must be an orienting grace that we can then repackage to others, because we’re more attuned to their hurts as we become less self-absorbed. It’s that Gospel proverb that says the person who takes on the supporting role shall be the lead in the drama, or something like that. 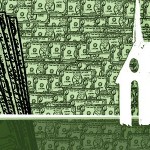 February 7, 2013
Can the Church Alone Provide Welfare for the Poor?
Next Post

February 7, 2013 In Vogue: How a Good Idea Became Exploitative
Recent Comments
1 Comment | Leave a Comment
"Radford made a connection between Ender and Hitler.Another possible connection: Could Card have been referring ..."
Raymond Z ‘Ender’s Game,’ Genocide, and Moral Culpability
"Faith is the confidence that what we hope for will actually happen; it gives us ..."
Smiley E.E. Music Matters: David Bowie, Still Not ..."
""that many of us do not accept that a few cells of human DNA constitute ..."
myintx How I Changed My Mind About ..."
"No thought given to the unborn child whose life was 'silenced and oppressed'... sad."
myintx How I Changed My Mind About ..."
Browse Our Archives
get the latest from
Evangelical
Sign up for our newsletter
POPULAR AT PATHEOS Evangelical
1