The Landslide of Terror: Living in This Present Darkness

This week I was leisurely skimming through music performances on YouTube. It was nice, one of those times when one good song leads to another good song and so on. At the time, I was looking for new country covers of classic songs. I had just finished up with an absolutely wonderful cover of Gram Parson’s “Sin City” and was moving on to the Dixie Chicks’ version of Fleetwood Mac’s “Landslide” when this came out of my computer:

Yeah. Weren’t the first six seconds of that trailer particularly terrifying? The demon-thing screaming, “Don’t skip it!” referring to the “skip ad” selection before a video. When this popped out of my screen I let out a helpless yelp and threw off my headphones, much to the curiosity of the other patrons in the quiet local coffee shop. My heart was thumping, and I couldn’t help but think that maybe this was some sort of cyber-prank aimed at twentysomethings that are still of afraid of the dark (guilty…and how did they find out!?!). But no, it was simply an ad spot for the new Evil Dead movie.

Don’t get me wrong; I am extra sympathetic to the new Evil Dead venture. I’m more than familiar with Sam Raimi’s Evil Dead (I can quote Army of Darkness like a pro), and I’ve read up on the new film, hoping that it would maintain the dark humor of the originals, particularly Evil Dead 2. I was pretty excited because the Great Bruce Campbell was endorsing it on Twitter, and I have a weird thing with Bruce Campbell; he’s the Tishro Mifune of B-Movies. But last week after reading an article or two, I decided the new Evil Dead was not for me. I don’t do horror films. Not because I don’t respect the genre or have any artistic quarrels with the medium, but because I’m a scaredy-cat. The last horror film I saw, the original Paranormal Activity, made me sleep with the lights on for three weeks.

All of this is to say, why the heck are they putting Evil Dead advertisements before Dixie Chicks videos?

Maybe it’s a societal fascination with pushing the boundaries of anything that might be considered “censorship,” an anti-Soviet Cold War leftover perchance? (Remember, in Soviet Russia, horror movies watch you!) Or perhaps it comes from American hyper-individualism that says, “It’s a free country, we can advertise wherever we want.” Or perhaps (probably) I am overreacting because I was absolutely terrified of the monster that popped up before I rocked out to the Dixie Chicks.

Nevertheless, scaredy-cat tendencies or not, this incident (unofficially called “The Landslide of Terror”) brings up some key issues on living in a society that hyper-saturated with media that we don’t always want to see. Horror films used to “have their place”; just as political talk shows and “offensive” art had their place. But in a culture of complete digital diffusion, this is impossible. I can’t avoid everything that makes me uncomfortable or scares the crap out of me. While there are some ethical issues with putting a startling Evil Dead advertisement before one of the most calming songs ever written, they aren’t issues that will go away by a “shame on you” article or a letter to YouTube. They are issues that 21stcentury Christians in particular will have to deal with. My Evil Dead scare is not all that different from how many a Christian has feel watching the political defeats of Christian morality on the news.

Responding to uncomfortable media and cultural brokenness in grace and truth will be the crux of the Christian witness in the upcoming decades. This must start at an internal level with an intellectual and practical confidence in the Christian message and worldview. In this, Christ holds onto the Church—not the other way around. Jesus told us the world wouldn’t be family friendly (Matthew 10:16–25). And while I would never want children to experience the Landslide of Horror or have to wrestle with their sexual identity in a culture that encourages sexual brokenness, they will.

We’ve got to be ready to stand firm in a hurricane of anti-Christian sentiment. Remember Paul’s closing thoughts to the Ephesians:

“Finally, be strong in the Lord and in the strength of his might. Put on the whole armor of God, that you may be able to stand against the schemes of the devil. For we do not wrestle against flesh and blood, but against the authorities, against the cosmic powers over this present darkness, against the spiritual forces of evil in the heavenly places.” (Ephesians 6:10–12)

Through this, we walk faithfully in a culture that is quickly tearing away its “Christian” façade. And as a side note, trusting Jesus is helpful for overcoming a fear of horror movies. Our hope is that one day, after the reconciliation of all things, we will be able to watch Dixie Chicks videos without any fear of evil monsters.

(watch at your own risk) 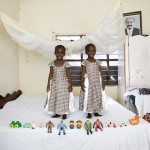 March 28, 2013 Can We Learn From Kids and Their Toys?
Recent Comments
4 Comments | Leave a Comment
Browse Our Archives
get the latest from
Evangelical
Sign up for our newsletter
POPULAR AT PATHEOS Evangelical
1