A Spirit of Fear: How Our Assumptions Get In the Way of Loving Our Muslim Neighbors

The following originally appeared in in Issue #5 of the Christ and Pop Culture Magazine and is an example of the kind of high-quality exclusive features that are unique to that format. For more features like this, download our app for iPad and iPhone from Apple’s App Store.After a one-week free trial, you’ll receive two issues a month and 24 issues a year for only $2.99 for a monthly subscription or $29.99 yearly. New issues are made available every other week. More information here.

As my friend who lives on the East Coast was shopping in Wal-Mart the other day, she noticed a larger, broad-shouldered man with a handlebar mustache perusing the same aisle as she. When his cell phone started ringing, my friend was surprised to hear the tell-tale wail of the Muslim call to prayer (Allaaaaaaah, Ahkbaaaaaaaar—literally, “God is great”) being used as his ringtone. As my friend started to meditate on her nature to stereotype certain people, her goodwill was interrupted by the sounds of gunshots and then screaming issuing from the same man’s cell phone. My friend, frozen in shock, watched as the man slowly answered his call and calmly talked on and on. Should I say something?, my friend wondered wildly to herself, looking at the other few customers in the vicinity. Should I tell him how offensive, how not-ok, how completely horrifying that ringtone is? But the man with the mustache talked into his phone, and the few customers around just glanced at each other with sheepish, raised eyebrows and small shoulder shrugs. As if to say, collectively: what are you going to do? People have offensive ringtones. People like Walmart. People hate Muslims. It’s a free country, after all.

I hang out with a lot of Muslims. I really like them. They know how to throw a good party, they have the prettiest dresses, they go absolutely gaga over babies. They are interesting and smart and funny and they let me see tiny glimpses into their devastating past and difficult present. They always, always, have hope for the future.

I went to Bible College to be a missionary. I learned how the globe was divided up into the 10/40 window and everyone else, how there were the “easy” mission fields and then the Muslim ones. I learned about Islam, the hard soil of violent, anti-Christian people, and steeled myself for the inevitable life of hardship that evangelizing this large and quickly-growing fundamentalist group of people was going to be.

While I was going to school to learn about how to convert such people, I started practicing on a few Muslims in my own backyard. Things quickly spiraled out of control. For every showing of the Jesus film I organized, there were a thousand different crises that the refugee families were experiencing: ESL classes, homework lost or undecipherable, food benefits, job classes, car crashes, bug infestations, credit card scams—the list went on and on. I became absorbed into the rhythms of helping my friends become familiar with surviving in America, taking them grocery shopping, talking about budgets, going to all the school events for the children–and in the process I was accepted into their apartments, homes, and lives.

I was having the time of my life.

Maybe this is why I connect with Carl Medearis so much. The author of books on Islam, Evangelization, the Middle East and everything in-between (two of my favorites are Muslims, Christians, and Jesus and Speaking of Jesus: the Art of Non Evangelism). Medearis approaches Muslim ministry in a completely different way than I had been taught in my Bible college and churches growing up.

“When I see a Muslim, I’m like my golden retriever,” he told me over the phone. “I just run up to them, and just love them. I assume, of course, they’re going to like me. Why would they not like me? I’m a likeable guy. Of course they would like Jesus, of course they would want to hear about Jesus. I can’t imagine any Muslim not wanting to talk about Jesus. And that’s not just positive thinking—I think that’s called faith. It’s having faith that God really does care for Muslims, really loves Muslims, and that we’ve lied to ourselves for a long time, telling ourselves that Muslims are unreachable. Muslims are actually the most reachable, friendly, inviting, hospitable, warm-hearted, Jesus-accepting people ever in the face of the planet. Somehow the enemy has lied to us, and we have believed this lie, perpetuated in our churches and it becomes a self-fulfilling prophecy.”

Medearis doesn’t believe that Muslim are to be feared, or that they are difficult people, hard ground, closed, or unreached. He thinks that Jesus is the most attractive person in the universe, and that Muslims are already predispositioned to love him (He is, after all, all over their religious books and stories, venerated as a prophet).

So, then, why aren’t Muslims coming to Christ in droves? Why do we see the effects of hatred and the acts of terrorism threatening lives all over the globe? These are largely unanswerable questions. But as the experience with my friend at Walmart shows, there is fear and hatred on all ends of the spectrum. As someone who lives and works with Muslims in America,  I greatly resonated with a quote from Tamerlan Tsarnaev, the deceased suspect in the recent Boston bombings. Interviewed several years before the attacks, Tamerlan described his feelings of alienation: “I didn’t have a single American friend; I didn’t understand them”. From my own time working with refugees, I can easily see how this can happen, particularly given the way we separate and isolate. We don’t understand what we don’t know, and this can quickly escalate into fear.

I asked Medearis how he would respond to Christians who are fearful of Muslims. He agreed that fear is undoubtedly the biggest issue in approaching Muslims—and that fear is very much within our control:

When you see an advertisement—an e-mail forward, a Youtube video—really effective ones make you afraid of Muslims. That is actually an effective tactic. And I think certain news channels do that very well. So all the time they are talking about the war on terror, and “What are the Muslims really doing?” They would say “We’re just presenting the truth here—we’ve got to take our heads out of the sand and know that there are Al Qaeda sleeper cells all across America. Don’t be naïve to the real muslim agenda.”

They’re not really creating fear, they’re just acknowledging the fear that exists already in the human heart. They give you permission to say ‘yes, that’s right. I saw a Muslim the other day and it looked like he was sneaking around and doing something.’

The only thing that drives out fear is getting to know real-life Muslims, eating in their home, inviting them to your house, having tea, having coffee, getting to know them, breaking down misunderstandings, laughing, joking together, going on vacation together, letting your kids play together. You begin to like them, because they are likable and then you begin to love them. When you see another email about how Muslims are going to take over America, you will just laugh. You’ll think, I wonder who wrote that. I wonder what kind of a nut wrote that. Because it wasn’t actually a Muslim who wrote that. It’s a lie. Because I actually know Muslims, and not a single one of them are thinking those thoughts.”

I used to attend mission conferences led by big-name Evangelical authors and speakers, calling for us to reach out to Muslims worldwide. I was pleased, as Muslims are some of my favorite people on the planet, and I desperately wanted to see the kingdom of God at work in their midst. But I would always walk away disheartened, subjected to videos, speeches, and rants about the “threat” of Muslims, of population explosions, graphs about brown-skinned people taking over the world, the White and the Christian shrinking ever smaller. The fear was palpable, and the crowd was left scared, defensive, with a vaguely nationalistic tendency, even more distrustful than ever of their neighbors. We were being sold love, but what was offered was fear.

I talked to Medearis a little about this too, especially as it relates to Muslims who live in our cities here in America. “I can’t be a good neighbor if I don’t know my neighbors,” says Madearis. “Of course I’ll be afraid of [Muslims] if I don’t know any of them.”

I have seen this, too. The cycle continues, factions withdraw, and parties become isolated, suspicious, and vulnerable to suggestions of violence.

We are living in a very fearful country, forever wary of losing ground, of giving up status, power, and the majority vote. This fear spills into our media, our ringtones, and even our evangelistic charges. This fear doesn’t build up; it diminishes.

Love starts with knowing, but many of us are already comfortable with where we are, surrounded by others who look, act and pray just like us. Getting out of these cultural ghettos costs us time, emotional investment, and involves a certain amount of risk.

Luckily, we are a country made up of sojourners, and we have been told by God how important it is that we honor and welcome the strangers among us. My life is now devoted to this concept, as I see the far-reaching consequences of not reaching out to our neighbors. It is true that my devotion has entailed a significant loss of power, of holding my life a little more loosely in my hands. As I have pursued love, each step fraught with struggle and selfishness and fear asking me to withdraw away from those so unlike myself, I have found the joy of reaching out. In the most unexpected ways, love has brought me the blessings of a broad community, of a richness of tastes, smells, conversations, and worldviews that makes my old life seem small and stale.

Even my first steps of love were tinged with fear: fear that Christianity was under attack, that God would love me less if I wasn’t a missionary to Muslims, fear that I would not have the capacity to love like I should. But these fears have all ebbed away, one by one, overshadowed by the great truth that Jesus has already shared: when we love, there is no room for fear. Fear is cast aside, like the ill-fitting cloak it always was, our steps lighter and freer without it.

D.L. Mayfield’s life is about 90% mundane and 10% cray-cray. She loves food and books and a good outsider perspective portrayed in pop culture. She gets very, very excitable when anyone mentions the phrases “kingdom of God”. You can find her blog here and on twitter as @d_l_mayfield. 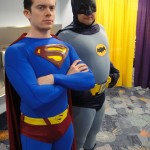 July 29, 2013 Finding Super-Blessings Among Cinematic Bombs
Recent Comments
0 | Leave a Comment
Browse Our Archives
get the latest from
Evangelical
Sign up for our newsletter
POPULAR AT PATHEOS Evangelical
1