Finding the Heart of God in a Bullying Prevention Campaign

Finding the Heart of God in a Bullying Prevention Campaign October 14, 2013 Erin Straza

Looking back on my growing up years, I’d say the tweens were the worst. Late elementary school and into middle school were marked with plenty of drama. Friendships felt tenuous as girls often bonded over the common enemy of the week. Romantic interests were fleeting at best. Staying steady in this tumultuous environment was impossible. In my immaturity, I grasped at whatever straws of security I could get my hands on. Sadly, those straws included adding my laughter when my circle found someone to pick on. Deflection meant that I was safe, at least for the moment. And despite the fact that my insecurities drove me to giggle at others rather than stand up for them, in today’s language, those acts would likely be classified as bullying.

These junior high antics came to mind after reading that October is National Bullying Prevention Month. Coverage for the awareness efforts often include the estimate that 160,000 kids stay home from school each day to avoid being bullied. Although the stat is dated, I’d venture that bullying is more common today, not less. I had my own anxiety-filled days as a kid when deflection had run its course and I became the outsider. If staying home to avoid the crowd had been an option, I would have taken it.

October’s campaign is meant to increase awareness of what qualifies as bullying, perhaps helping kids see the seriousness of their behavior. Although bullying wasn’t commonly discussed when I was a kid, I knew meanness when I saw it—I just wasn’t brave enough to do the right thing. I’m guessing the same is true of kids today—they know that teasing the outcasts and harassing their enemy of the day is wrong. But courage is needed to stand up when it could turn the spotlight of taunting onto you instead.

Whatever the accurate number of bullying incidences may be, there needs to be fewer. Bullying is in direct opposition to God’s heart for the outsiders and outcasts; this awareness campaign is echoing His care for those who are harassed and helpless. 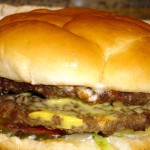 October 14, 2013
Should We Be Offended by a Sacrilegious Hamburger?
Next Post

October 14, 2013 ELSEWHERE: Nobel Prize for Using Computers to Do Chemistry
Recent Comments
0 | Leave a Comment
Browse Our Archives
get the latest from
Evangelical
Sign up for our newsletter
POPULAR AT PATHEOS Evangelical
1