“God’s Not Dead,” But this Trope Is

Have you heard the one about the Atheist University Professor who was famous at his school for mocking Christianity and a belief in God? You know, the one where a brave Christian student finally stands up to the teacher and calmly and articulately reveals the irrational basis of the “professor’s” atheism and thereby causes the professor to flee the room in shame, at which time the student shares the Gospel with his whole class?

Maybe it wasn’t “Atheism” per se.

Maybe it was Evolution.

Maybe that student was “Einstein.”

Maybe it was a Physics or Philosophy class.

Maybe there was a piece of chalk involved.

The story is always the same: an arrogant, frothing-at-the-mouth atheist faces a Christian student who exposes him as a fraud. Evil is shamed, Good is proclaimed.

Only, this never happened, at least, not that anyone can credibly verify. Snopes has two enlightening articles on this narrative: “Dropped Chalk” and “Malice of Absence.”  And, of course, there is a fantastic Chick Tract. We evangelicals love this story. We share it through chain emails and on social media. We love stories of haughty atheists being put in their place.

Now, thanks to Pure Flix Entertainment, this story has come to life in a new motion picture, God’s Not Dead:

As a friend said, this could be the first film to be based off of a chain email. There’s lots to poke fun at in this trailer. Hercules stiltedly quoting Shakespeare and Nietzsche. The title, which evokes the question: God’s not-dead what? The simplistic narrative of the evangelical standing up against the evil liberal atheist professor boogie man. But I don’t want us to write this off so easily, because this narrative is appealing to evangelical subculture, and honestly, it’s everywhere in evangelical culture.

Take, for example, dubbing April 1st “National Atheist Day” or memes about how dumb and irrational evolution or atheism is. And if you think about it, aren’t most public “debates” between Christians and atheists live dramatizations of this narrative? We send our brightest male Christian into the secular forum (the university) to put the cocky, liberal atheist in his place.

These stories comprise a popular evangelical trope and reveal a collective fantasy we have of humiliating arrogant atheists. We want to believe that atheists are not merely spiritually foolish (a clear, scriptural truth), but also haughty, stupid, jerks.

This narrative of the brave, Christian who stands up to the evil liberal professor is a subset of the larger American (human?) theme of the underdog. It’s David and Goliath (as one Snopes article points out). Only, this narrative creates several problems for Christians.

For one, these stories often lie. Even when they admit to being “fiction,” like God’s Not Dead, they still misrepresent the truth. It is quite possible to “lie” in a fictional story, which is what we see in the Chick Tract: the professor is both ignorant and arrogant while the Christian is brilliant and patient.

From my experience, it’s far more likely that your atheist professor is an intelligent person, and often Christian students are only “equipped” to respond to an antiquated straw-man of Evolution or atheism. Sometimes, the professor is incredibly gracious and sincerely concerned for you and the Christian is arrogant.

Stories like this can also give believers a false sense of security and superiority. We feel like atheism is obviously stupid and evolution is a fairy-tale for unthinking adults. We become sure in ourselves and our abilities to refute the unbeliever and in the unbeliever’s stupidity. We come to think that we have specific knowledge of the atheist’s perspective and can expose it easily. But what happens when a evangelical meets an atheist with really good questions? False confidence in a straw-man vision of atheism does nothing to build up the faith. If we are honest and humble, we ought to recognize that there are many difficult, troubling, and complex aspects of our faith. This honest recognition may mean the difference between a faith that weathers the storms of life and one which sinks under sudden and unexpected doubts.

If we truly want to minister to and protect our children when they go off to college, we need to stop preparing them to make fools out of their professors and start preparing them to prayerfully and faithfully look for answers to any significant questions they encounter.

Although there may be times where it is appropriate to be blunt to unbelievers, indiscriminately sharing and wearing slogans which mock atheism as idiocy or blatant stupidity or even foolishness is unloving and unhelpful. While Proverbs may describe unbelievers as “fools,” it was not the practice of Christ or the apostles to go around sharing the Good News with a sign that read, “April 1st, National Atheist Day! Cause you’re fools! Get it?” Let them know us by our love, not our arrogance.

Instead of day-dream fantasies of embarrassing atheist professors, let us dream of loving and proclaiming the Gospel in word and deed to everyone.

This post was adapted from an earlier column, here. 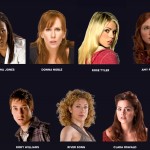 October 24, 2013
Doctor Who's Doctrine, Part 6: Those Complicated Companions
Next Post

October 25, 2013 ELSEWHERE: Why Japan's Young People Aren't Having Sex
Recent Comments
0 | Leave a Comment
"Radford made a connection between Ender and Hitler.Another possible connection: Could Card have been referring ..."
Raymond Z ‘Ender’s Game,’ Genocide, and Moral Culpability
"Faith is the confidence that what we hope for will actually happen; it gives us ..."
Smiley M.M. Music Matters: David Bowie, Still Not ..."
""that many of us do not accept that a few cells of human DNA constitute ..."
myintx How I Changed My Mind About ..."
"No thought given to the unborn child whose life was 'silenced and oppressed'... sad."
myintx How I Changed My Mind About ..."
Browse Our Archives
Related posts from Christ and Pop Culture