Part 3: Exterminating Evil
Part 4: The Trip of a Lifetime
Part 5: Music for a Mad Man

I came for the Doctor; I stayed for the companions.

Like most, I wandered into my obsession with a strange, sci-fi children’s show called Doctor Who at the recommendation of friends. And by recommendation, I mean full on badgering—by some very smart, funny, witty people. So I dived in, like most people do, with the series rebirth from 2005-2011, conveniently streaming on Netflix.

The first few episodes threw me off. And by that, I basically mean the entire first season was me adjusting to the fact that I was watching a cheesy, slapstick comedy with a few intense dramatic moments within. I had to wrap my mind around all these villains and their terrible costumes and sound effects (EXTERMINATE!). But mostly, I had to get used to the dynamic of a Doctor and his companion.

I mean, come on. I can’t believe that the language isn’t intentional. The sexism of the terms themselves (not to mention the show’s predilection for young, beautiful companions) should immediately give pause. And in many ways, I found some of the plot lines between the Doctor and his female companion to be tiring, full of tropes, and usually written at the expense of the women characters themselves. I don’t like how the companions sometimes seem to exist solely in order to “save” the Doctor from himself, how they are written to be uncomplicated, one-note wonders,  how they are expected to jump into a strange little box with a mad man at a moment’s notice.

But here is what I do like: that’s not all the show is. Over 6 seasons, with a multitude of writers and directors (although they could stand to have a few more females—harrumph), I have come to be consistently surprised by the show. Just when you think they can’t get any more predictable, or cheesy, or have one more Manic Pixie Dream Girl be the companion de jour—the show has a way of changing on you. Here’s a completely subjective recap of the companions (and, it should be noted, for obvious reasons: SPOILERS).

I suffered through Rose. I liked the working-class elements of her character (her acid wash jeans! Those sneakers!), but by the David Tennet seasons I just couldn’t stand her. Her main characteristics involved flashing her giant, goofy smile and giggling up at the Doctor. Her redeeming qualities include introducing the character of her mother Jackie Tyler, who to this day remains one of my favorite characters on the show. I also enjoyed seeing Rose when she appeared in later seasons, all sober-minded and leading a revolution (complete with enormous weaponry). I actually sort of liked that unsmiling, serious creature. She actually had a bit of chutzpah about her.

Martha gets a short shrift on the internet, but I liked her. She always looked a bit worried, which soothed me after the intense silliness of Rose. Martha, famous for her unrequited love for the Doctor, handled her feelings with a gravitas I found compelling. Martha also brought another layer of complexity of the show by being the first person of color to be a companion. In some time-travling situations, Martha finds herself automatically being relegated to the servant, while the Doctor is the professor. In many ways, her character revealed just how privileged the Doctor was. I like how Martha can see all of this—even the Doctor’s refusal to acknowledge her feelings for him—and she chooses to empower herself instead of focusing on the Doctor. In the end, when Martha left, I felt almost relieved for her. Now she could get on with the business of her life: leading rebellions, being a real doctor, being awesome.

That’s Doctor Donna, to you. I am team Donna, all the way. She is the best thing that ever happened to that show. Donna is smart, shrill, auburn-haired, and not the teensiest bit mouthy. I like how complex she was—how she was fragile and a bully and incredibly caring and a bit like a teenager around her mum. How she told the Doctor what was what, and how she never lost sight of what was truly important: every day, ordinary people. In the end, when Donna saves the world and the 10th Doctor looks at her, and realizes that all along she’s been full of bluster and bluff: at her core, Donna still does not realize how valuable she is. She also proved that it is possible to have electric chemistry with the Doctor without a hint of romance clouding up everything. Donna was a breath of fresh air, and there has been no one like her since.

I never liked Amy. From day one she was eye-candy; she doesn’t have much of a backstory (please—The Girl Who Waited is the most Manic Pixie thing I have ever heard in my life). She blindly follows the Doctor around, is aggressive in her pursuit of danger and selfishness, and is perennially mean to the greatest boyfriend/husband you could ever wish to meet. Both Amy and the 11th Doctor seemed to be a calculated ploy at a younger, hipper audience. Amy is selfish, and good-looking, and that’s all we really get to know of her. Shame on the writers for thinking that would be enough.

Not technically a companion, River gets enough screen time that she should be mentioned. I adored River from the moment she took control of the first scene she appeared in; I loved her cheeky smile, her sorrow and her wisdom. I loved how she spanned multiple seasons and a dizzying timeline; I love her catchphrases (Hello, Sweetie), and how she made everything so deliciously saucy. I liked how much she differed from others in her ideaology (River Song was no pacifist). But I don’t like that by the end River seemed to be a pale version of herself, another tiny background player in the story of the Doctor. I don’t like the way she said things like “don’t ever let him see you age”, and how it became all about a wedding. By the time her storyline was over, it seems the brilliance of River Song had been played out. Well, it was good (and gorgeous) while it lasted.

Rory, long-suffering boyfriend/husband of Amy Pond, is probably my second favorite companion. I was completely blindsided by the importance of his character. As he continued to show up in episode after episode, my confusion gave way to pleasure. He was the perfect bumbling foil to the steely Amy and the silly 11th Doctor. Rory Williams: The Boy Who Understood That This Was All a Bit Mad. Rory never fell prey to the charms of the Doctor, but he was exceedingly loyal. He was funny, he was witty. He was just a dude, who was confused most of the time, but who really truly wanted to do good by the world. I don’t know what he ever saw in Amy.

Beyond the 6 (and I stop here, since I don’t quite know enough about Clara to have an opinion on her) there is the ensemble that rounds out the companion dynamic. The characters that travel with the doctor for an episode or two (and sometimes even more). Of those, I find Jackie Tyler and Wilfred Mott to be the most compelling and hilarious of the short-term companions. But for every endearing family member, we also get Kylie Minogue dressed up as a scantily clad waitress (hint: not my favorite). Sensing a theme? I, like many others, crave stories that matter. We crave characters that we can identify with, or look up to. We aren’t satisfied with the shallow, because it turns people into objects (long shots of Amy Pond’s legs, I’m thinking of you). I believe all of us recognize that as dehumanizing to the characters, which affects us as we consume the stories. Even as Doctor Who panders to the easy stereotypes every once in a while, I am gratified that the show doesn’t stop there, giving us plenty of real characters with emotions to go on. As Doctor Who has evolved, the network of trusty, fragile human companions seems to grow with it. And in the end, I began to see myself in them.

Other writers have made the case that the human companions are something of an emotional anchor to the Doctor. They humanize him, save him from his fits of bad temper, fall in love with him, scold him, and bring him down to size. I would also add that the companions are there for us, the audience: to titillate, to move us emotionally, to act as a mirror for our own desires. As a Christian, I have found myself fascinated by the larger themes of the show: non-violence, forgiveness, memory, sorrow, and in the end—companionship. In a way, it has redeemed my view of the word, so often used with the connotation of the lesser. As a Christian, I see how the companions are somewhat similar to me: complicated creatures who are being asked to grapple with the unimaginable: how far will we follow the image of the Invisible One? I see how so many in my tribe choose to follow God in so many different ways, see how we all respond uniquely to the invitation to expand our worlds beyond what we can see, to live like the kingdom of God is already here, and that it is not yet.

Speaking as a fan of the show, I still see some issues of representation of work in the dynamic of the Doctor and his companion. So what will we demand of the show in the future? We will accept another beautiful, brittle Amy Pond, but only if there is a Rory Williams at her side. Because in the companions I see the mirror image of myself. And I am not a one-note wonder. I am confident and doubtful, brave and fearful, terrified and amazed, and made in the image of God. So here’s to more Donna, less Rose. Here’s to the complicated; here’s to the reality of life in the kingdom of God.

October 23, 2013
ELSEWHERE: Should We Abandon the Culture Wars?
Next Post 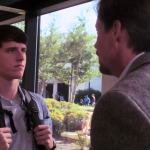 October 25, 2013 "God's Not Dead," But this Trope Is
Recent Comments
0 | Leave a Comment
"Radford made a connection between Ender and Hitler.Another possible connection: Could Card have been referring ..."
Raymond Z ‘Ender’s Game,’ Genocide, and Moral Culpability
"Faith is the confidence that what we hope for will actually happen; it gives us ..."
Smiley M.M. Music Matters: David Bowie, Still Not ..."
""that many of us do not accept that a few cells of human DNA constitute ..."
myintx How I Changed My Mind About ..."
"No thought given to the unborn child whose life was 'silenced and oppressed'... sad."
myintx How I Changed My Mind About ..."
Browse Our Archives
Related posts from Christ and Pop Culture