The Kiddy Pool: Reading The Dark as Children of the Light

The Kiddy Pool: Reading The Dark as Children of the Light January 7, 2014 Erin Wyble Newcomb

I’ve been intrigued by The Dark ever since I saw it on a display table at Barnes and Noble around Halloween. Written by Lemony Snicket and illustrated by Jon Klassen, it seemed sure to be a grimly comedic gem. Best known for his Series of Unfortunate Events, Lemony Snicket tones down the macabre for the younger audience of this picture book. Jon Klassen (whose work I particularly love in Extra Yarn and I Want My Hat Back) provides his typical sparse yet dramatic characters and lots of play with light and shadow. This story follows Laszlo on his journey to overcome his fear of the dark by descending into the basement for a light bulb; the dark is as much a character in the story as Laszlo himself, and the two speak to each other in ways that illuminate our anxieties about the unknown.

The story opens in a room bare except for Laszlo and a few small toys; the window shows a descending sun that’s casting the space into shadows encroaching closer and closer to Laszlo, who appears under the words “Laszlo was afraid of the dark.” The following pages show Laszlo wandering around a seemingly enormous but mostly empty house, peaking into corners, behind the shower curtain, and opening the basement door to greet the darkness. His hope is “that if he visited the dark in the dark’s room”—that cavernous basement—“maybe the dark wouldn’t come visit him in his room.” Of course, it does, when his nightlight goes out and Laszlo must walk to the basement to get a new one. I could say some literary things here about his metaphorical descent into the underworld, but either way it’s a creepy sequence with Laszlo and his meager flashlight trying to avoid the basement at all costs.

My daughter says her favorite page is the one showing Laszlo standing at the top of the basement stairs, his flashlight revealing a long staircase and a shady bureau just outside the beam of light. The dark says “Come closer.” The image shows the limits of the light Laszlo can cast and the depth of the darkness into which he must descend. By the next spread, Laszlo’s flashlight barely penetrates the blackness. Then there is a polite, surprising exchange where the dark offers Laszlo a light bulb, and he returns to his room in glowing splendor. Snicket reminds us though, that while Laszlo no longer fears the dark, he’s still always in the dark “when he closed his eyes to go to sleep.”

I like the interplay of dark and light in the images and metaphors in this book. The opening scene reminds me of the possibility of living in the light (or claiming to) and still fearing the darkness. Laszlo’s travels around the creaky, old house call to mind a sort of spiritual journey for me. I have often tried to greet my anxieties head on, to seek out what makes me afraid, only to find myself thrust into a darkness I didn’t choose and can’t control. Those are the times that test the spirit, and that make my spiritual flashlight feel insignificant against the forces of darkness in this world. Yet while it’s easy for me to cast the light as spiritual good and the dark as spiritual evil in Snicket’s story, that analogy doesn’t play out with the text itself. This dark is strange but not menacing, profound but not evil. And that helps me remember that sometimes, even as a child of the light, I create my own fears, my own darkness. I, too, am still in the dark when I close my eyes to sleep, and it’s the light of God within me that soothes me and tells me I have nothing to fear. 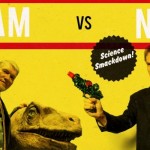 January 8, 2014 Manliness Reconsidered
Recent Comments
0 | Leave a Comment
Browse Our Archives
get the latest from
Evangelical
Sign up for our newsletter
POPULAR AT PATHEOS Evangelical
1