Why Is Pride A Sin in the Bible?

What are the reasons that pride is sinful?  What is it about pride that God hates?

God is at War with the Proud

James 4:6 says that “God resists the proud but gives grace to the humble.”  The Greek word for opposes or some translations say resist is literally “to range in battle against” and humble is “those of low degree”, or literally “not rising far from the ground” so this Bible verse should actually read that God is in battle with or at war with the proud but gives grace or favor to the those of lowly degree and are bowed to the ground. God cannot work with a prideful heart because there is no room for grace to enter as someone that is prideful often believes that they are superior to others and could not possibly learn from someone else, even God!  Peter says something very similar in 1 Peter 5:5b “Clothe yourselves, all of you, with humility toward one another, for God opposes the proud but gives grace to the humble.” This theme is not just found in the New Testament but is prevalent throughout the Bible.  In Proverbs 3:34 Solomon wrote “Toward the scorners [God] is scornful, but to the humble he gives favor (or grace).”  A scornful person is hard to be around as they are by definition, contemptuous, feel disdain toward others, and has a feeling, attitude or an expression that looks down upon others.  It is no wonder that God is at war with such individuals and the fact is that prideful people are hard to be around. 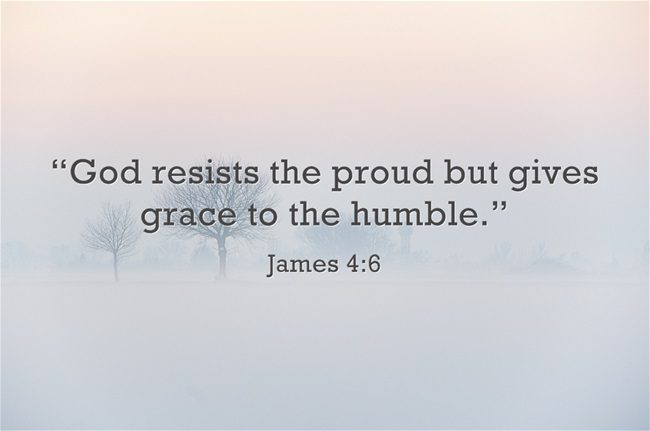 In what most people refer to as the “Seven Deadly Sins” in Proverbs 16:16-19, every single one of these sins are things that have their root in pride;

“There are six things that the Lord hates, seven that are an abomination to him: haughty eyes, a lying tongue, and hands that shed innocent blood, a heart that devises wicked plans, feet that make haste to run to evil, a false witness who breathes out lies, and one who sows discord among brothers.”

Haughty eyes are eyes that look down on others (pride), lying is almost always done to make someone look better or others inferior (pride), murder is done with the express intent on devaluing other’s lives and getting revenge or expressing hatred (pride), a deviser of evil does so out of hate (pride), feet that can’t wait to do evil do so for lustful reasons (pride) and false witness breathes (speaks lies with regularity, also pride-induced), and whoever sows division (discord) does so for selfish reasons (pride).

The Fall of Lucifer (Satan)

Pride caused Satan to want to take over the throne of God and to be ruler of the universe.  Satan lacked humility and great was his fall (Luke 10:18) and his pride disqualified him to rule, even on the earth (Rev 3:9). Satan said to himself “You said in your heart, ‘I will ascend to heaven; above the stars of God I will set my throne on high; I will sit on the mount of assembly in the far reaches of the north” (Isaiah 14:13).  The stars are believed to be the angels of God and he wanted to sit on the throne of God (the mount of the assembly) in heaven (the reaches of the north).

The Fall of Man

In the Garden, God clearly told Adam and Eve that they could eat of any of the trees in the Garden except for the “tree of life” but human pride was the cause of their disobedience. Satan lied to Eve by saying “You will not surely die.  For God knows that when you eat of it your eyes will be opened, and you will be like God, knowing good and evil” (Gen 3:4b-5).  Here was the first temptation of mankind and they failed miserably. Notice how pride (as lust) was involved in all three of these desires; “the woman saw that the tree was good for food (lust of the flesh), and that it was a delight to the eyes (lust of the eyes), and that the tree was to be desired to make one wise (the pride of life), she took of its fruit and ate, and she also gave some to her husband who was with her, and he ate” (Gen 3:6; 1 John 2:16). Lust is caused by wanting something that someone else has for one’s own pleasure or to satisfy one’s own desires.  That is pride at its worst. This is the breaking of the 10th Commandment; coveting.  Wanting something that is not theirs and being thankful or grateful for what they do have.

Pride is a person’s overwhelming sense that they are superior to others and have no conscience about it.  Pride is a high satisfaction with one’s own self and a feeling of superiority which can lead to a haughty attitude by somebody that believes that they are better than others and so they often take without thought or care about others or the consequences of their actions.  A person that is full of pride needs nothing from anyone and is a self-contained, self-sufficient person and often breeds arrogance.  That pride is an egotistic pride that is full of vanity in one’s own abilities or achievements.  God resists such people because they don’t feel they need anyone and that anyone includes God.  For those who feel that they need God in their lives there is a humility where they highly esteem God and esteem others for that matter.  In Romans 12:3 Paul says “to everyone among you not to think of himself more highly than he ought to think, but to think with sober judgment.”

Do you know someone that is full of pride?  Are they not hard to be around?  Do they ask for help or willingly acknowledge their need for others?  This is not usually the case.  God’s face is against the prideful (Psalm 10:4), He doesn’t hear them (Job 35:12), because they are arrogant (Prov 21:24), and it eventually brings ruin (Ezk 32:12). John writes that “For all that is in the world—the desires of the flesh and the desires of the eyes and pride of life—is not from the Father but is from the world” (1 John 2:16).  It’s as if John took this as a lesson from the Garden of Eden.

What is in the middle of pride?  “I” is in the middle of pride but instead seek to be humble, because God resists the proud but gives grace only to those who are humble and of a contrite spirit.  A prideful person should know that their pride comes just before a fall and that fall can be a big one (Prov 16:18). God cannot save the proud because they do not seek Him but the lowly He does save (Job 2:29). Anyone that is full of pride is going to eventually be brought low and humbled (Isaiah 2:17) but those who humble themselves now will be exalted by God someday (Matt 23:12; Luke 14:11) and will receive God’s blessings (Matt 5:5).   Today, if you will humble yourself before God, He will exalt you someday but if you refuse to do so because of your pride, you will be humbled anyway so why not choose now to humble yourself before the mighty hand of God because there is wisdom in true humility and people tend to gravitate toward humble people.  So too does God.  As Peter concludes with his writing to

“Clothe yourselves, all of you, with humility toward one another, for “God opposes the proud but gives grace to the humble. Humble yourselves, therefore, under the mighty hand of God so that at the proper time he may exalt you” (1 Pet 5:5b-6).

Jack Wellman is Pastor of the Mulvane Brethren church in Mulvane Kansas. Jack is also the Senior Writer at What Christians Want to Know whose mission is to equip, encourage, and energize Christians and to address questions about the believer’s daily walk with God and the Bible. You can follow Jack on Google Plus or check out his book  Blind Chance or Intelligent Design available on Amazon.

April 11, 2014
What is the Purpose Behind the Gospel of Mark? - A Bible Study
Next Post

April 12, 2014 What Does The Bible Say About Divorce?
Recent Comments
18 Comments | Leave a Comment
Browse Our Archives
get the latest from
Christian Crier
Sign up for our newsletter
POPULAR AT PATHEOS Evangelical
1