What is Shekinah Glory? Is This In The Bible?

Jesus’s glory as God was veiled in human flesh but at times His glory, the so-called Shekinah glory, was revealed.  What is the Shekinah glory of God?

What does the word “Shekinah” mean?  It’s not in the Bible and so why do we need to know what this word means regarding God’s glory?  The work Shekinah is from the Hebrew word “shekinot” and actually is in the Bible where God is said to “settle in” or “dwell with.”  This word means where God is dwelling, settling or where His Divine Presence is.  This glory is seen when God’s glory filled the Temple and even in the wilderness where He was a light during the night and the Shekinah cloud of His glory shaded Israel in the scorching sun of the desert.  His presence was manifested by the intense light that filled the Tabernacle, the Temple in Jerusalem and even in the Transfiguration on the Mount where Jesus shone brighter than the sun when He spoke with Moses and Elijah as we shall read about later.

Haven’t you wanted to see God in His glory?  Many people have a strong urge to see Jesus Christ in His Person but the fact is that no one can see the full glory of God and live although during Jesus’ earthly ministry, they did see Jesus but His glory was cloaked in His humanity.  Moses was no exception and finally asked God if he could see him.  This account is in Exodus 33:18-23

“Moses said, “Please show me your glory.”  And he said, “I will make all my goodness pass before you and will proclaim before you my name ‘The Lord.’ And I will be gracious to whom I will be gracious, and will show mercy on whom I will show mercy.  But,” he said, “you cannot see my face, for man shall not see me and live.”  And the Lord said, “Behold, there is a place by me where you shall stand on the rock, and while my glory passes by I will put you in a cleft of the rock, and I will cover you with my hand until I have passed by.  Then I will take away my hand, and you shall see my back, but my face shall not be seen.”

God says that no one can look at God and live (Ex 33:20) so God allowed Moses to see His glory but only a partial glimpse where He placed Moses in the “cleft of the rock” and had to cover him with His hand until he “passed by.”  Then God said that “I will take away my hand, and you shall see my back, but my face shall not be seen” because Moses would have surely died.  The intensity of the Shekinah glory of God would have incinerated Moses and would anyone who saw Him.

Moses came down from the mountain with the Ten Commandments and after seeing a partial view of God’s backside, his face radiated with the glory, the Shekinah glory of God.  This was recorded in Exodus 34:29-35.

“When Moses came down from Mount Sinai, with the two tablets of the testimony in his hand as he came down from the mountain, Moses did not know that the skin of his face shone because he had been talking with God. Aaron and all the people of Israel saw Moses, and behold, the skin of his face shone, and they were afraid to come near him.  But Moses called to them, and Aaron and all the leaders of the congregation returned to him, and Moses talked with them.  Afterward all the people of Israel came near, and he commanded them all that the Lord had spoken with him in Mount Sinai.  And when Moses had finished speaking with them, he put a veil over his face. Whenever Moses went in before the Lord to speak with him, he would remove the veil, until he came out. And when he came out and told the people of Israel what he was commanded, the people of Israel would see the face of Moses, that the skin of Moses’ face was shining. And Moses would put the veil over his face again, until he went in to speak with him.”

Moses was reflecting the intensity of God’s Shekinah glory and had to put a veil over his face for the people were afraid to look at him and when “Moses went before the Lord to speak with him, he would remove the veil, until he came out.”  When “the people of Israel would see the face of Moses, that the skin of Moses’ face was shining…Moses would put the veil over his face again” because the people feared this.  Like the moon only reflects the light of the sun and has no source of light in itself, so too did Moses reflect the glory of God and Moses was not the source of this light but God was…it was the Shekinah glory of God still emanating from Moses’ face.

Jesus’ Glory of the Transfiguration

Jesus partially revealed His Shekinah glory on a mountain and allowed Peter, James and John to see this glory.   This is why the Apostle John said that Jesus “dwelt among us, and we have seen his glory, glory as of the only Son from the Father” (John 1:14) and that Jesus is “the light of men.  The light shines in the darkness, and the darkness has not overcome it. There was a man sent from God, whose name was John (the Baptist). He came as a witness, to bear witness about the light, that all might believe through him” (John 1:4-7).  Jesus being the very essence and nature of God as light and that is part of His Shekinah glory which was why John said “we have seen his glory.”   The Transfiguration is where Jesus allowed James, John, and Peter to see His glory in Matthew 17:1-8.

“And after six days Jesus took with him Peter and James, and John his brother, and led them up a high mountain by themselves.  And he was transfigured before them, and his face shone like the sun, and his clothes became white as light.  And behold, there appeared to them Moses and Elijah, talking with him.  And Peter said to Jesus, “Lord, it is good that we are here. If you wish, I will make three tents here, one for you and one for Moses and one for Elijah.”  He was still speaking when, behold, a bright cloud overshadowed them, and a voice from the cloud said, “This is my beloved Son, with whom I am well pleased; listen to him.”  When the disciples heard this, they fell on their faces and were terrified.  But Jesus came and touched them, saying, “Rise, and have no fear.”  And when they lifted up their eyes, they saw no one but Jesus only.”

Here is where Jesus briefly peeled back His humanity to allow the disciples to see the very Shekinah glory of God.  It was overwhelming to them just as it is to anyone where God reveals His glory.  Humans are like dead men when they see the glory of God (Rev 1:17) and fall flat on their faces.  This was the same reaction of the disciples when they beheld Jesus’ glory and this Shekinah glory is sometimes present in the cloud that descended on the Temple, the Tabernacle, and in the “bright cloud [that] overshadowed” the disciples at the Transfiguration. When Jesus ascended into heaven after His resurrection, He ascended with this Shekinah glory in the clouds. 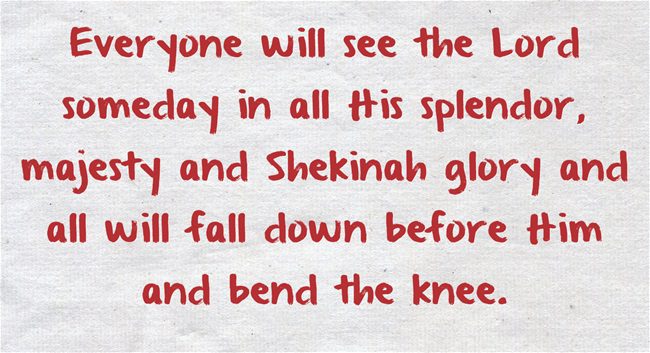 Everyone will see the Lord someday in all His splendor, majesty and Shekinah glory and all will fall down before Him and bend the knee.  Some will do so willingly as He is their Lord and Savior and King but for others, He will be their Judge and send them off into eternal torment (Rev 20:11-15).  God cannot dwell where there is unconfessed sin or where someone has never repented and trusted in Christ.  You decide today which of two places you will go.  That day to decide cannot be put off because today is the day of salvation (2 Cor 6:2) or it will be the day of condemnation (John 3:18).

May 16, 2014
Faith Without Works Is Dead: Bible Study and Meaning
Next Post