Who Was Timothy In the Bible? A Character Study

There are two books in the Bible with Timothy’s name on them.  Why was his name on them?  Who was Timothy?  Why did Paul write these letters to Timothy and do they give us a clue as to who he was?

Letters or Epistles to Books of the Bible

Why Letters to Timothy?

Paul wrote many of his letters or epistles while in prison and these were known as the Prison Epistles but his letters to Timothy and Titus are called the Pastoral Epistles even though Timothy and Titus were not actually pastors of a church, rather they were representatives of Paul who could not be there with them.  Timothy and Titus acted as official delegates of Paul in order to assist the local churches.  The letters gave Timothy and Titus instructions as to how to run the church in regards to the care of the flock, conduct of the members and ministers, the administration of the church and the order in which the church should be conducted.  He had to write letters to the churches because he was frequently in prison.  What most would think was a punishment from God or a very unfortunate circumstance turned out to be the greatest blessings that the church has today.  Because of Paul’s imprisonment, we have nearly 2/3rd’s of the New Testament.  What seemed to be a determent to Paul and the church became one of the greatest blessings of all time to the churches and believers, including churches and Christians today.  We might not have these books in the Bible if Paul had not been imprisoned and so what men determined to do as evil, God meant it for good, just as He did with Joseph’s many trials (Gen 50:20).

Paul was writing to Timothy because Timothy was having a difficult time.  Part of the reason was that many of the believers despised Timothy because he was young and they looked down, or condescendingly on him (1 Tim 4:12).  Paul had apparently led Timothy to saving faith in Christ (1 Tim 1:2) and was teaching Timothy through these letters that he needed to contend with the false teachers (1 Tim 1:3-7), what the qualifications for a pastor were (1 Tim 3:1-13), that many were to fall away from the faith once delivered (1 Tim 4:1-5), how the church should be organized (1 Tim 5:1-25), that the false teachers meant that he had to fight for the faith of Christ (1 Tim 6:3-10), to remember his spiritual heritage that he learned from his mother and grandmother (2 Tim 1:4-6), to study hard to know how to teach and rightly discern biblical teachings (2 Tim 2:15-17), that in the last days the sinful tendencies of man would increase (2 Tim 3:3-9), and to keep preaching the Word and that the word corrects, rebukes and exhorts all believers (2 Tim 4:1-5).  Paul was apparently in his last days on earth (2 Tim 4:6-8) and he was about to die for his faith even though everyone else but the Lord had abandoned him (2 Tim 4:16) so he needed to.

Timothy was a young evangelist or church administrator or representative for Paul and this young man was sent to the churches to help them establish order and to lay down specific principles regarding the structure of a church, how to handle misconduct and how to resist the teachings of some of the false teachers that were in attendance in the local churches. Timothy was like an ambassador, acting as a representative of the Apostle Paul who had the authority to ensure that the churches were doing things in the way in which Christ would have them done.  If you are a pastor then 1 and 2 Timothy is for you and is intended to help you in knowing how the church should conduct its internal affairs.  These two books are like an instruction manual for pastors and include qualifications for a pastor, deacon, and/or elder.  Timothy is never called a bishop or pastor in the New Testament although he may have been a deacon (1 Tim 4:6) and being a deacon he had the authority to teach and preach.  He was actually directed to remain at the church of Ephesus to ensure that correct doctrine would be taught (1 Tim 1:3) but this didn’t mean that he was supposed to remain there as a pastor (2 Tim 4:13) because a pastor would naturally remain in that same church.  If Timothy were a pastor, then he would have remained at one of the churches and Paul would have addressed him as a pastor but the Scriptures never do state this. 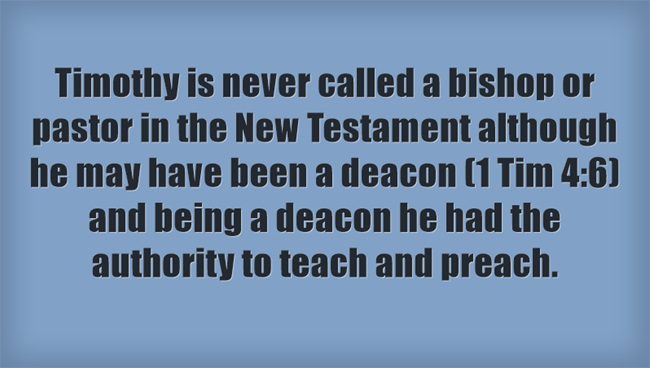 If Timothy were alive on the earth today, for he is surely present with the Lord today, he would have been traveling to advise churches on how to run the local body of Christ, how to deal with false teachings, and what the qualifications for pastor are.  He might be a traveling consultant for the churches and don’t we need someone like this today.  Maybe your church doesn’t preach expository (or Bible-centered) teachings, or the church is not disciplining its members who are living in sin, or it isn’t preaching about the cross and the essentials of repentance, confession, and trust in Christ.  If not, talk to your pastor, ask him questions.  Any good pastor should be open to questions regarding the church.  Pastors are accountable ultimately to Christ but they are also accountable to the members of the church if they are not being biblical.  Pastors should be preaching Bible-centered messages and not always topologically.  They should focus on Christ and the redemptive plan of salvation through faith alone in Christ alone by grace alone.  There are many churches out there that do.  My prayer is that if you are not already in one, you may find one.

May 24, 2014
What Does Reverence Mean? Bible Definition of Reverence
Next Post

May 24, 2014 What Does The Word Holy Mean? Bible Definition of Holy
Recent Comments
3 Comments | Leave a Comment
Browse Our Archives
Related posts from Christian Crier