What Was The Tabernacle In the Bible?

I believe that the tabernacle is a small reflection of the dwelling place of God in heaven.  In ancient Israel, the temple or tabernacle was the focus of their worship because that was the place where God’s presence and His glory dwelt.  They came to worship Him there, to make offerings, and to live in obedience to Him as He spoke to them.  When God had called Israel out of Egypt from their slavery, the tabernacle was portable and moved when God moved with the nation of Israel following Him in the pillar of the cloud, which represented His Shekinah glory.  In the Holy of Holies was the Ark of the Covenant which contained Aaron’s rod that had budded and the Ten Commandments.  The rod represented God’s choosing those whom He had called to be leaders and the Ten Commandments represented the expectations of Israel’s obedience.  Only the high priest could enter the Holy of Holies and only then, once a year on the Day of Atonement.

The Hebrew word for tabernacle, “mishkan” translates as the word “rest, dwell” or “to live in” because that is where God dwelt or lived among the people.  The “rest” represents the nation, and the people of God, entering into His rest from all their own efforts to save themselves because it is God and Him alone that brought them out of Egypt (which represents sin) and today God is still bringing men, women, and children out of sin and giving them rest (Heb 4:1-11) and salvation is fully a work of God (Rom 8). The tabernacle is sometimes referred to as the tent of meeting (Ex 33:7-10) because that is where God meets with His people. 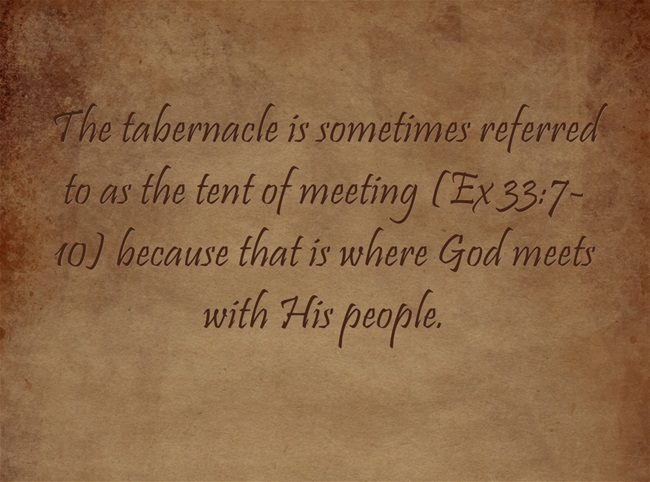 The Priests and the Tabernacle

Only the tribe of Levi could minister in the tabernacle because these where His designated priests.  Today, believers can freely come to God and worship Him because God has “made us a kingdom of priests to his God and Father, to him be glory and dominion forever and ever. Amen.” (Rev 1:6).  This was not just for us today but God told Moses to tell the nation of Israel that “if you will indeed obey my voice and keep my covenant, you shall be my treasured possession among all peoples, for all the earth is mine; and you shall be to me a kingdom of priests and a holy nation” (Ex 19:5-6).   We have access today to the throne room of heaven because of our High Priest, Jesus Christ as it is written in Hebrews 4:14-16 “Since then we have a great high priest who has passed through the heavens, Jesus, the Son of God, let us hold fast our confession.  For we do not have a high priest who is unable to sympathize with our weaknesses, but one who in every respect has been tempted as we are, yet without sin. Let us then with confidence draw near to the throne of grace, that we may receive mercy and find grace to help in time of need. “

The People of God as the Tabernacle

Paul asks a rhetorical question of the church at Corinth, “Do you not know that you are God’s temple and that God’s Spirit dwells in you?  If anyone destroys God’s temple, God will destroy him. For God’s temple is holy, and you are that temple.” Paul is saying that since the Spirit of God or the Holy Spirit dwells in believers, they represent the living temple of God because God is dwelling with us and is present in us just as He was in the Tabernacle in the Wilderness and in Jerusalem.  He has said to us that “we are the temple of the living God; as God said, “I will make my dwelling among them and walk among them, and I will be their God, and they shall be my people” (2 Cor 6:16).  How clear that is!

Jesus Tabernacles or Dwells with Us

Jesus came to earth and was pleased to dwell with mankind in order to redeem mankind.   In John 1:14 is says “And the Word became flesh and dwelt among us, and we have seen his glory, glory as of the only Son from the Father, full of grace and truth.”  The Word is Jesus (John 1:1, 14) and when it says that He “dwelt among us” the Greek word “dwelt” is interesting as it is Greek for “skenoo” which literally translates “to fix one’s tabernacle, have one’s tabernacle, abide (or live) in a tabernacle (or tent)”.  So Jesus came to earth to redeem us and He tabernacles in us.  Paul uses the word “in Christ” over a hundred times so this says that Jesus came to tabernacle with us or in us so today believers are the temple or tabernacle of the Living God because God the Holy Spirit and Christ lives within us and God is pleased to dwell with His people, who were once not a people of God being separated from Him as His enemies and as sinners (1 Pet 2:10).  We can glorify God because our human body is the temple of God and this glory of God can shine through our love for one another so that others can know that we are the children of God (John 13:34-45).

The glory of God is seen when God’s glory filled the tabernacle and even in the wilderness where He was a light during the night and the Shekinah cloud of His glory shaded Israel in the scorching sun of the desert.   He does so today with Christians and as His presence was manifested by the intense light that filled the tabernacle, the temple in Jerusalem and even in the Transfiguration on the Mount where Jesus shone brighter than the sun when He spoke with Moses and Elijah, we are to glorify God in our lives as a light to a darkened, sin-stained world.   In the Transfiguration, Jesus briefly peeled back His humanity to allow the disciples to see the very Shekinah glory of God.  It was overwhelming to them just as it was to anyone when God revealed His glory.  Humans are like dead men when they see the glory of God (Rev 1:17) and fall flat on their faces.  This was the same reaction of the disciples when they beheld Jesus’ glory and this Shekinah glory is sometimes present in the cloud that descended on the temple, the tabernacle, and in the bright cloud that overshadowed the disciples at the Transfiguration. When Jesus ascended into heaven after His resurrection, He ascended with this Shekinah glory in the clouds.

In the New Jerusalem, there will be no need for a temple or tabernacle because at that time “the dwelling place of God is with man. He will dwell with them, and they will be his people, and God himself will be with them as their God” (Rev 21:3) which is why the Apostle John “saw no temple in the city, for its temple is the Lord God the Almighty and the Lamb.  And the city has no need of sun or moon to shine on it, for the glory of God gives it light, and its lamp is the Lamb.  By its light will the nations walk, and the kings of the earth will bring their glory into it, and its gates will never be shut by day—and there will be no night there. They will bring into it the glory and the honor of the nations” (Rev 21:22-26).  If you have repented and trusted in Christ, you will be in the New Jerusalem, but if you are not yet born again, know this, “nothing unclean will ever enter it, nor anyone who does what is detestable or false, but only those who are written in the Lamb’s book of life” (Rev 21:27).

May 24, 2014
What Does The Word Holy Mean? Bible Definition of Holy
Next Post