What Is the Meaning of Jubilee in the Bible?

The word “jubilee” in the Old Testament is from the Hebrew word “yobel” or yovel” meaning “a ram’s horn, trumpet” or “coronet.”  If someone announced the Jubilee, they would be actually blowing a trumpet and all of the congregation of Israel would be able to hear it.  The Year of Jubilee was special to Israel as we shall read about in Leviticus and see if there is any significance or symbolism for the Christian today.

The Year of the Jubilee

Leviticus 25:8-12 “You shall count seven weeks of years, seven times seven years, so that the time of the seven weeks of years shall give you forty-nine years.  Then you shall sound the loud trumpet on the tenth day of the seventh month. On the Day of Atonement you shall sound the trumpet throughout all your land.  And you shall consecrate the fiftieth year, and proclaim liberty throughout the land to all its inhabitants. It shall be a jubilee for you, when each of you shall return to his property and each of you shall return to his clan.  That fiftieth year shall be a jubilee for you; in it you shall neither sow nor reap what grows of itself nor gather the grapes from the undressed vines.  For it is a jubilee. It shall be holy to you. You may eat the produce of the field.”

The Jubilee then came every fifty years.  When the trumpet sounded on the fiftieth year, and specifically on the Day of Atonement, liberty would be proclaimed “throughout the land to all its inhabitants” and then all of the property that had been taken by others for unpaid debts would have to be returned to the original families (clans).  On that year there would be no reaping or planting or gathering of the crops for it was to be “holy to” the nation Israel and everyone could “eat the produce of the field.” What a celebration that must have been.  Everyone that had been indebted was then released from that debt and able to start over again by having their land returned to them.

Interestingly the official beginning of the Jubilee Year started on the Day of Atonement, which is symbolic of the atoning of sin for the nation of Israel, fulfilled in the sacrifice of Jesus Christ at Calvary.  This too represented a release from a debt…the debt that we owed from our sins that we could never have paid in a million lifetimes.  In the Jubilee Year all of the slaves and prisoners were set free and all of the land that had been taken by others due to unpayable debts was released back to the original owners.  Once again, symbolically, we were slaves of sin (Rom 6:17) and held captive by them due to our inability to pay for them so in a similar fashion, God commanded that “In this year of jubilee each of you shall return to his property” (Lev 25:13) and the prisoners and slaves could be set free. 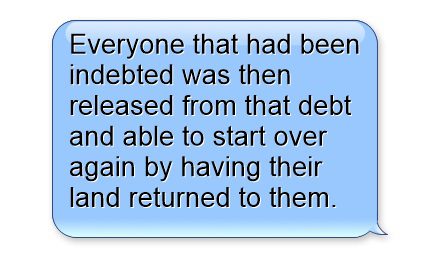 A Trumpet Blast of Liberty

The Septuagint translation of the Bible, renders the word Jubilee in Hebrew “yobel” or yovel” as “a trumpet blast of liberty” but today the Day of Atonement is no longer observed in Israel and is presently called Yom Kipper or “Day of “ (yom) “Atonement” (“kippur” or release).    Contrary to what many believe, the Day of Atonement was the most solemn day of the year which included a 25-hour period of intense prayer and fasting (or affliction).  Most of the day was spent in the temple or sanctuary in worship, reading the Torah, and in prayer.  There seems to be a link between the Hebrew word “kippur” and “kapporet” which was the name of the mercy seat which was the covering of the Ark of the Covenant where the blood of the sacrifice was sprinkled on.  It was said to be the “propitiation” which is a word that means “the satisfaction” or “to appease, to satisfy” which seems to fit nicely with the sacrifice that Christ made.  His blood was spilled and mercy shown to us because of His blood being poured out to satisfy the wrath of God for our sins.

The Jubilee as the Emancipation

What this year means is that all those who had to sell themselves into slavery because of their debts or had lost their property to someone so that they could survive and not starve to death was redeemed by God as no Israelite was to remain a slave permanently.  It would also be a way to restore financial and property equality among the nation’s inhabitants so that the disparity between the rich and the poor would be gone.  This equality allowed those in extreme poverty who had lost everything and even their own freedom to be gained back in the only way that they could have possible received it.  In this way, all of the property of the nation became, in a sense, the property of all and no one family or person could gain an unfair advantage over their fellow citizens.   There was also the command to give the land a rest from its labor of producing for the people.  This rest, once again, may reflect the rest we have from our works and that salvation is fully a work of the Lord but agricultural research shows that farmland can produce a much larger yield if it lays fallow (or unplanted and unworked) for a full year.  Some of the farmers where I live do this for just this reason.

The Jubilee year contains many of the pictures of our salvation.  Just as the land, the people, and all the property was released, so we too have been released from a debt that we could not pay (our sins).  We were once slaves to sin but now we’ve been released, once held captive but now set free.  Christ’s blood has atoned for our sins and satisfied the wrath of God that was due us (Rom 5) and as the land was given rest, we too have entered into His rest from all of our works for we could never save ourselves by our own works because salvation is fully a work of God.  If you are not saved, then maybe you have asked what some had asked Jesus “What must we do, to be doing the works of God?”  Jesus answered them, “This is the work of God, that you believe in him whom he has sent” (John 6:28-29).