Why Was There Polygamy In The Old Testament Of The Bible?

Why Was There Polygamy In The Old Testament Of The Bible? June 23, 2014 Jack Wellman

Does the Bible teach, condone or approve of polygamy?  Why did God allow polygamy in the Old Testament?  What does the Bible say about whether polygamy is right or wrong?

Polygamy is basically the practice of having one or more wives.  The word comes from many “poly” marriages “gamos.”  The word polygamy comes from the Greek “polygamia” and if translated it means “state of marriage to many spouses.” It is the state of having two or more and in some cases, several wives and the converse is when a woman has many husbands is called “polyandry.”  Although it is illegal in the United States and in many countries, it still thrives in many nations but primarily in rural areas.   The Mormon Church’s Joseph Smith says that he had a revelation from God in 1831 that polygamy should be practiced by some Mormon men although the Bible does not allow for it and in fact, there are commands against this practice as we will read about later.

The New Testament on Marriage and Polygamy

When Paul was giving Titus instructions for selecting church elders he wrote that “if anyone is above reproach [he should be] the husband of one wife” (Titus 1:6) or literally, the husband should be “a man of one woman” so the New Testament nowhere condones or allows for the practice of polygamy.  Going even further, Paul tells Timothy what a pastor or overseer should be, “If anyone aspires to the office of overseer, he desires a noble task.  Therefore an overseer must be above reproach, the husband of one wife” (1 Tim 3:1-2) and to “Let deacons each be the husband of one wife, managing their children and their own households well” (1 Tim 3:12).  All the Scriptures about marriage always speak of the husband and the wife in singular terms (Eph 5:22-23; Col 3:18-19) so there is not any place in the New Testament that allows for polygamy in the church or for Christians so if any have a polygamous marriage then that is in direct conflict with the Word of God. I do understand that the elders, pastors, and deacons are to be a “one woman man” means that they should remain monogamous or have no sexual relations with another woman but we must conclude that this would of course mean marriage to another woman because marital relationships typically involve sexual relationships.

Gen 2:24 “Therefore a man shall leave his father and his mother and hold fast to his wife, and they shall become one flesh.”

Deuteronomy 17:15-17 “You may indeed set a king over you whom the Lord your God will choose. One from among your brothers you shall set as king over you. You may not put a foreigner over you, who is not your brother.  Only he must not acquire many horses for himself or cause the people to return to Egypt in order to acquire many horses, since the Lord has said to you, ‘You shall never return that way again.’  And he shall not acquire many wives for himself, lest his heart turn away, nor shall he acquire for himself excessive silver and gold.”

When God allowed Israel to have their own king He commanded that the king not acquire great wealth as in many horses, gold, and silver, but He also should not “acquire many wives for himself.”  Why?  “lest his heart turn away” from the Lord, so if the king could not multiply wives, how much more so than any other man.

Unfortunately Solomon did not heed what the Lord had said and these 700 wives did just what God had warned against; “his wives turned away his heart after other gods.”

Biblical history is replete with examples of when a man acquired more than one wife and that history reveals considerable problems that followed.  Just look at Abraham whose wife Sarah had set her against Abraham’s other wife, Hagar.  This produced one of the greatest worldwide conflicts that history has ever known, setting Israel (Abraham’s son, Isaac’s descendants) against the Arabs (Abraham’s son, Ishmael’s descendants) but there were other such examples of difficulties in having more than one wife in Jacob, David, and Solomon. 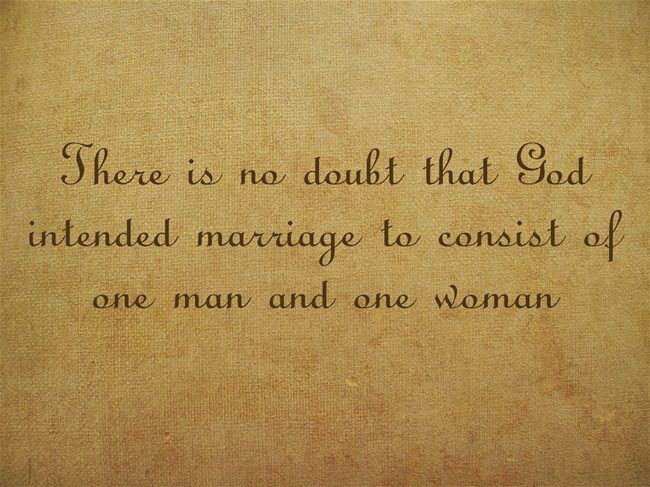 There is no doubt that God intended marriage to consist of one man and one woman.  As we have read, and as you can read in the Bible for yourself, every time a man took more than one wife there were issues that created problems and divided the home.  In the New Testament, every time marriage is mentioned, it is mentioned as being between one man and one woman.  Even the qualifications for a pastor, deacon, elder, or any teacher or leader in the church, the men were to be a one woman man.  God never approved of nor did He ever suggest polygamy or a woman to have more than one husband (polyandry).   Just because others did this in the Old Testament is no reason that we can have a license to do the same thing.  The Old Testament saints were written about, warts and all, in complete transparency, in order that we might not repeat their mistakes and not to give us permission to do the same things.

If you are not part of the Body of Christ, the Bride, then you are separated from God right now and you have God’s wrath abiding on you (John 3:36b).  If you would rather have the peace of God (Rom 5:1) then you need to repent, confess your sins, and then put your trust in Christ (Rom 10:9-13) but if you reject the Savior, you are condemned at the moment of your reading this (John 3:18b).  That is something that you can change today…right now (2 Cor 6:2) and then you too can become part of the Bride of Christ and celebrate together in the great marriage feast of the Bridegroom, the Lamb of God, in the kingdom of heaven and rejoice forever more in the presence of God (Matt 25:1-13; Rev 19:7).