Is There Evidence Jesus Was A Real Person?

Is There Evidence Jesus Was A Real Person? August 14, 2014 Jack Wellman

What evidence can we provide about Jesus’ historicity in the Bible and outside of the Bible?  Is there any concrete evidence that Jesus was a real person?

The authenticity of Jesus’ existence is easily proven.  Not only are there the genealogical studies of the gospels of Matthew and Luke, but we have extra-biblical sources that are simply too numerous to include in one article.  The plain, historical truth is that there is no single person in all of human history that more has been written about more than Jesus Christ.  From Roman and Jewish historians to secular historians of the present age and from the age of antiquities, there is no shortage of the Man from Galilee.  Based upon historical methods, which include a critical analysis, the overwhelming majority of biblical scholars and modern and ancient historians all agree that Jesus lived on earth, lived in Judea, was a real Man in space and time, and His teachings have been the single, greatest influence that the world has ever known.  There may be significant differences on His teachings but there is major agreement on His historicity, most modern scholars of antiquity agree that Jesus existed.1

Titus Flavius Josephus (37 – c. 100) wrote extensively about the Jews, from the time of Abraham up to day in which he lived.  He was a Romano-Jewish historian and scholar. He was and still is well respected and what he wrote about Jesus in the Antiquities of the Jews was impressive. He writes in Book 18, chapter 3 that “Jesus was a wise teacher who was crucified by Pontius Pilate…”  His accounts are held to be of the highest of authenticity.2 Josephus accurately describes the condemnation and crucifixion of Jesus at the hands of the Roman authorities.3  Some of Josephus’ writings include very convincing testimony of Christ like:

“About this time there lived Jesus, a wise man, if indeed one ought to call him a man. For he was one who performed surprising deeds and was a teacher of such people as accept the truth gladly. He won over many Jews and many of the Greeks. He was the Messiah.  And when, upon the accusation of the principal men among us, Pilate, had condemned him to a cross, those who had first come to love him did not cease. He appeared to them spending a third day restored to life, for the prophets of God had foretold these things and a thousand other marvels about him. And the tribe of the Christians, so called after him, has still to this day not disappeared.”4

The New Testament scholar, James Dunn states that nearly all modern scholars consider Jesus’ baptism and, especially important, His crucifixion, historical certainties.5  Bart D. Ehrman states as a matter of fact that there is a wide range of sources including Josephus and Tacitus that attests to Jesus’ life, crucifixion, and death6 and John P. Meier thinks it ridiculous that Christians would invent such a horrific ending for their leader.7

Tacitus, a professional, Roman historian, referenced some of Pliny’s sources about Jesus and accepted them as fact in his own accounts.8   Tacitus, who was considered one of the greatest historians of ancient Rome, verifies the Biblical account of Jesus’ execution at the hands of Pontius Pilate who governed Judea from 26-36 A.D. during the reign of Tiberius.  His historical accounts precisely match those accounts recorded in the gospels.

If Jesus Christ was a Christian invention, then why would more than one hundred ancient Historians include Christ in their writings if they knew he didn’t exist? We have already mentioned Josephus and touched on Tacitus, but there are so many others like Gibbons, where it was written of his accounts that “church historians allow the substantial justness of [Gibbon’s] main positions” on the founder of and the religion of Christianity.9  We can be certain that historians, both secular and Christian, would not have written about someone that was only a myth. They wrote with certainty when speaking of Jesus. Even skeptical historians agree that the New Testament is a remarkable historical document and has stronger manuscript support than any other work of classical literature, including Homer, Plato, Aristotle, and Caesar, who all pale in evidential comparison.

It is no accident that Jesus Christ is the most widely recognized, well known and written about Person that has ever existed. You cannot ignore the enormous number of original documents that make up the Canonized books of the Bible. These are the most valued of all sources to Historians (a primary source) in validating past events. The Word of God (the Bible) was inspired by the Spirit of God, therefore the Bible’s testimony is true about Jesus Christ. The fact that Jesus lived, was buried and then resurrected has evidence that would be considered admissible evidence in a court of law. Even the Chief Priests, Scribes, Pharisees and Sadducees said as much and acknowledged that Jesus told the truth. Many of these religious rulers knew He was from God but for fear of losing their authority and positions, conspired to kill Him anyway (John 3; Luke 19:28-20, 20:20-26).

Dr. Thomas Arnold, 19th-century history professor at Oxford, said, “I know of no one fact in the history of mankind which is proved by better and fuller evidence of every sort, to the understanding of a fair inquirer…”  Scholar Gary Habermas has pointed out that five historical facts about Christ are all agreed to by nearly all ancient Historians [three of which are] that He was crucified, buried and was seen again afterward.  One of the world’s foremost experts in lines of evidence was Simon Greenleaf, an American attorney and jurist (1783-1853). In his book the “Testimony of the Evangelists” he views the multiple eye-witness accounts of Jesus and His death and resurrection as being valid lines of evidence. They meet or exceed evidential requirements, so much so that Greenleaf saw the “martyrdoms, exponential church growth and the persistent-through-persecution faith of the believers” (often up to the point of death), as solid of evidence that there can possibly be.  A leading British philosopher, Anthony Flew, who after fifty years of atheism, came to the conclusion that God must exist, saying “The evidence for the resurrection alone is better than for claimed miracles of all other religions.  There leaders are buried and still in their graves.  Jesus tomb was found empty!” 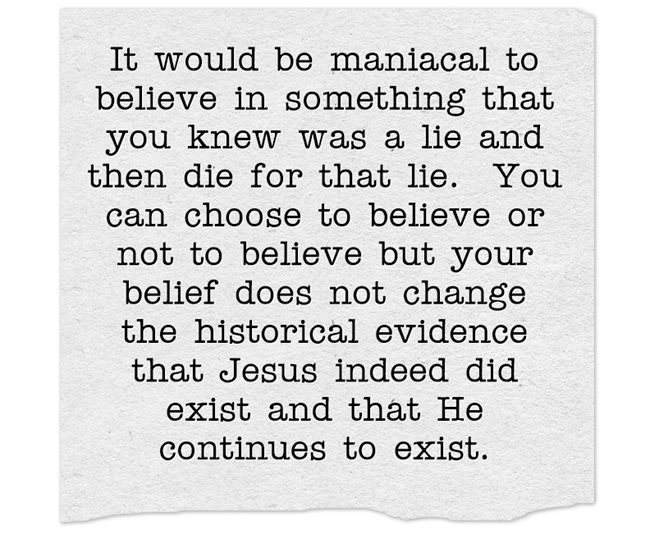 It would be maniacal to believe in something that you knew was a lie and then die for that lie.  You can choose to believe or not to believe but your belief does not change the historical evidence that Jesus indeed did exist and that He continues to exist.  For many, they will believe too late (Dan 12:2; Rev 20:11-15).  If I am wrong, then you have nothing to lose and you will cease to exist at death but if the Bible is right, and I am convinced that it is, you will have to give an account for your life after you die (Heb 9:27) but “Those who are wise shall shine. Like the brightness of the firmament, And those who turn many to righteousness. Like the stars forever and ever” (Dan 12:3).  Reject this truth and you will face “shame and everlasting contempt” (Dan 12:2c).

1. While discussing the “striking” fact that “we don’t have any Roman records, of any kind, that attest to the existence of Jesus,” Ehrman dismisses claims that this means Jesus never existed, saying, “He certainly existed, as virtually every competent scholar of antiquity, Christian or non-Christian, agrees, based on clear and certain evidence.” B. Ehrman, 2011 Forged: writing in the name of God ISBN 978-0-06-207863-6. page 285.