Who Was Luke the Evangelist?

Who Was Luke the Evangelist? August 16, 2014 Jack Wellman

Who was Luke, the author of the gospel bearing his name? What was the purpose behind the Gospel of Luke?  Is there a particular audience and reason for this Gospel?

The Gospel is Good News

The literal meaning of the word “gospel,” which is a derivative of “god-spell,” means “good news” or “glad tidings.”  It is good news for those who have not yet recognized their need for the Savior, Jesus Christ.  The word Gospel is also a word-for-word translation “euangelion” (eu “good,” angelion “message”).  Paul uses the word often and sometimes calls it the gospel of God and most Christians today call the gospel the message of salvation through Jesus Christ because it is the good news of God but it is most frequently referred to as simply “the gospel.”

Luke was apparently a physician but by the accounts of noted historians, his historiography of the life of Christ was one of the best historical documents ever written.  His eye for detail is not lost and like that of being an eyewitness to many of the events recorded in the gospel with his name, having recorded minute details and writing out an orderly account (1:2-3).   For the most part, the gospel does remain authorless but that is only because he wrote it for someone else and not for his own purpose (Luke 1:3; Acts 1:1).  We have good evidence that he was both the author of this gospel as well as the Book of Acts as supported by second century external evidence as well as biblical evidence that supported the fact that he was a physician (Col 4:14). Luke was apparently a Gentile and accompanied Paul on his missionary travels throughout much of the Roman Empire.  This is supported by the manuscripts in the Book of Acts as the “we” which was spoken in the third person (16:10; 20:5-21:18; 27:1-28:16).   The fact that Luke used more medical terms than all the other gospels combined is strong evidence that he was a physician.

Luke is not listed among the 12 Disciples or Apostles so it is believed that Luke later came to faith after Jesus’ resurrection and he accompanied Paul during his evangelizing of Judea and into parts of Asia-Minor.  The logic of having a physician with a traveling missionary party would seem to be quite fitting because traveling in those days was extremely dangerous and there was a good deal of exposure to various diseases and illnesses along the way.  Modern historians consider Luke’s writings to be one of the greatest historical books in history.  Luke wrote the Gospel of Luke and the Book of Acts, and at one time, it was all one book but was later separated into two books for ease of reading, however if you read the end of the Gospel of Luke and the beginning of the Book of Acts, you can easily see that it is a continuous book that was intentionally written as one book.  Evidence to this fact is the way in which Luke begins the gospel by writing “to write to you an orderly account, most excellent Theophilus, that you may know the certainty of those things in which you were instructed” (Luke 1:3b-4) and which he begins Acts 1 with “The former account I made, O Theophilus, of all that Jesus began both to do and teach, until the day in which He was taken up, after He through the Holy Spirit had given commandments to the apostles whom He had chosen” (Acts 1:1-2).  So we see that Luke wrote these two books for historical purposes for Theophilus with the gospel being the account of Jesus’ earthly ministry and the Book of Acts which deals with what many consider the birth of the church and would better be called The Book of the Acts of the Holy Spirit because it reveals how God’s Spirit establishes, directs, guides, and grows the church.

Accurate history is recorded by Luke and ancient historical and archeological evidence has confirmed the places, people, and events of Luke’s Gospel and as well as those described in the Book of Acts.  His writings mirror those of his contemporary historians like Flavius Josephus, Publius Cornelius Tacitus, and many others.  The finite detail which Luke writes with gives the reader the idea of an eye-witness to the happenings of the apostles and the early church in the first century.  The accuracy of the historicity of Luke’s writings and the gospel accounts match precisely the writings recorded in the Book of Acts, the Gospels, and the remaining books in the New Testament.

The Purpose of Luke

The gospel of Luke was written for both historical purposes and for the “most excellent Theophilus” (1:3) for which purpose he also authored the Book of Acts by again mentioning Theophilus (1:1).   The author is also sometimes called Luke the Evangelist because of his involvement in the proclaiming of the gospel with Paul.   The Gospel of Luke stresses that Jesus was the Perfect Man.   Writing just like a doctor would write a historical narrative, Luke gives the longest account of the birth of Jesus and going into more detail than all the other gospels or in any other book in the Bible.  Luke puts special emphasis on the humanity of Jesus while not diminishing the divinity of Christ.  He gives more description to the death and resurrection of Christ and since this gospel is also an historical document, it is also the longest of the other gospels by far. Luke also puts much effort into describing the physical suffering of Christ as well as revealing the truly human nature of Jesus. 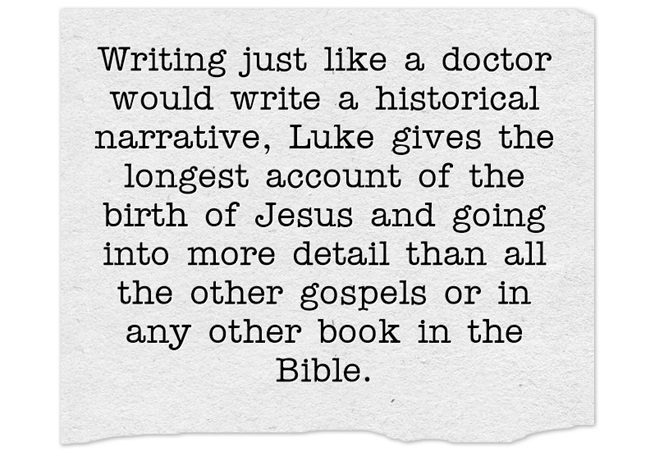 We know that Jesus came to earth and was born of a virgin, that He lived a sinless life, that He was the perfect sacrifice for a sinful, fallen humanity, that He died for us to pay a debt that He didn’t owe and for a debt we could not pay, and also gave His own life willingly so that we might be forgiven and redeemed from the wrath of God.  If you have not yet repented, confessed your sins, seen the sinfulness of your life, saw the desperate condition of your state, and then put your trust in Christ, then you will the wrath of God still abiding on you (John 3:36b).  Worse, you are storing up wrath against that Day of Judgment that could come at any time (Rom 2:5; Acts 17:11).  My prayer for you, whoever you are reading this, is that you will bend the knee today and make Him your Savior but if not, you will still bend the knee and confess that Jesus is Lord but He will be your Judge (Rev 20:11-15).  It is your choice.  I plead with you to choose life…before it is too late (2 Cor 6:2).

August 16, 2014 Is There Evidence Jesus Really Rose From The Dead?
Recent Comments
5 Comments | Leave a Comment
Browse Our Archives
get the latest from
Evangelical
Sign up for our newsletter
POPULAR AT PATHEOS Evangelical
1