What is the Difference Between Dreams and Visions in the Bible?

Are there differences between dreams and visions?  If so, what are they?

Joel prophesied about dreams and visions in Joel 2:28 “And it shall come to pass afterward, that I will pour out my Spirit on all flesh; your sons and your daughters shall prophesy, your old men shall dream dreams, and your young men shall see visions.”  The very fact that Joel writes that dreams and visions will come indicates that they are not the same thing.  Why else would Joel delineate between the two with the word “and?”  Clearly, dreams are not the same thing as visions and we can discover the main differences from the truest source there is…the Word of God, the Bible.

In Genesis 37:5-8 it says “Joseph had a dream, and when he told it to his brothers they hated him even more.  He said to them, “Hear this dream that I have dreamed:  Behold, we were binding sheaves in the field, and behold, my sheaf arose and stood upright. And behold, your sheaves gathered around it and bowed down to my sheaf.”  Joseph’s brothers hated him even more for this dream and his father Jacob rebuked him for it but this dream was prophetic and later came true in Joseph’s life.  After his brothers sold him into slavery, he later became second in power over Egypt and his brothers actually did bow down to him.

It’s ironic that Jacob didn’t believe in Joseph’s dream when he had one himself.  This dream is recorded in Genesis 28:12-14 where “he dreamed, and behold, there was a ladder set up on the earth, and the top of it reached to heaven. And behold, the angels of God were ascending and descending on it!  And behold, the Lord stood above it and said, “I am the Lord, the God of Abraham your father and the God of Isaac. The land on which you lie I will give to you and to your offspring.  Your offspring shall be like the dust of the earth, and you shall spread abroad to the west and to the east and to the north and to the south, and in you and your offspring shall all the families of the earth be blessed.”  This dream was also prophetic and would later come true.  This dream has been realized today because Abraham and his sons have descendants in both the Arab world and in the nation Israel with descendants totaling into the millions.

When dreams are mentioned in the Bible, they are almost always prophetic in nature and when they are fulfilled at a later time, they are validated as having their source from God.  I have heard from many who say that they have dreams and I am then asked what these dreams mean.  It is impossible for me to interpret dreams because I am no Joseph who not only had dreams which came true, but had been given the ability from God to interpret dreams (Gen 40).  I have no such gift.  Without that gift, it is impossible for me or anyone else to interpret someone else’s dream.  I would say that any time that a dream seems contrary to what is written in the Scriptures, then that dream cannot be used as something that God has sent because God would never contradict Himself by sending a dream that goes against what is revealed in His written Word, the Bible.  All I can say is that the dream may have come from God but dreams are so random in nature that it is humanly impossible to say with any authority whether they are from God or just something that they ate before bedtime.  God can use dreams to try and communicate to people and I will not limit what God can do but we already know for certain what God’s will is and it is found recorded in the Scriptures so there is no reason to guess about it.

In Ezekiel 1:1a-3 it is Ezekiel records “I saw visions of God. On the fifth day of the month (it was the fifth year of the exile of King Jehoiachin), the word of the Lord came to Ezekiel the priest, the son of Buzi, in the land of the Chaldeans by the Chebar canal, and the hand of the Lord was upon him there.”  The literal Hebrew says that Ezekiel saw visions “from God” so this vision was clearly from God.  It was the vision of the glory of the Lord as his vision was of the throne room of heaven.  This was no dream nor was it in reality because no one can look at God and not be instantly incinerated (Ex 33:20).

Ezekiel also had a vision of the Valley of Dry Bones in Ezekiel 37 where he wrote that “The hand of the Lord was upon me, and he brought me out in the Spirit of the Lord and set me down in the middle of the valley; it was full of bones” (Ezk 37:1).  Obviously this was not a dream but a vision because the Lord had His hand upon Ezekiel and the fact that bones were joined to bone and flesh came upon them was representative of something that God was telling Ezekiel about what was to come to pass someday.  This vision was prophetic of the house of Israel that would be resurrected again and that God had not abandoned Israel forever.

In the Book of Revelation, John wrote that he “was on the island called Patmos on account of the word of God and the testimony of Jesus [and he] was in the Spirit on the Lord’s Day” (Rev 1:9-10).   Once more we see that this vision is from God as he was “in the Spirit.”  The Book of Revelation is not the revelation of John but is actually the “revelation of Jesus Christ, which God gave him to show to his servants the things that must soon take place. He made it known by sending his angel to his servant John” (Rev 1:1).  Once more, like the dreams, this vision was prophetic as this entire book is.  The Book of Revelation is not written in chronological order, that is, it was not written in a sequential nature or time order of events but is a mixture of occurrences in differing orders of time.  Visions in the Bible are always from God.  Visions that come to people today may or may not be from God but that is not the normative, of that I can be sure.  I am not restricting the possibility that God may use visions but we don’t really need any new revelation from visions because we have all the truth we need from the Word of God, the Bible.  There is no other new revelation that is needed that is not already found in the Bible.

Differences Between Visions and Dreams

The main difference between visions and dreams in the Bible is that dreams are received while the person is sleeping while visions are received while the person is awake and they are often “in the Spirit.”  So many people today claim that they have visions and dreams from God but how can they know for sure if they are?  If the dream or vision comes true 100% of the time and if they completely agree with biblical doctrine, they indeed they may be from God but again, these are not the normative because we already have what God wants to say to us and His will is revealed in the Scriptures.  We cannot put God in a box but neither can we build doctrine or have new beliefs that are of human origin that come from visions or dreams and have as their source, human beings.  If anyone has a vision or dream and it doesn’t square up with what the Bible says, you can be certain that it is not from God.  It is either random or it is from the Enemy. 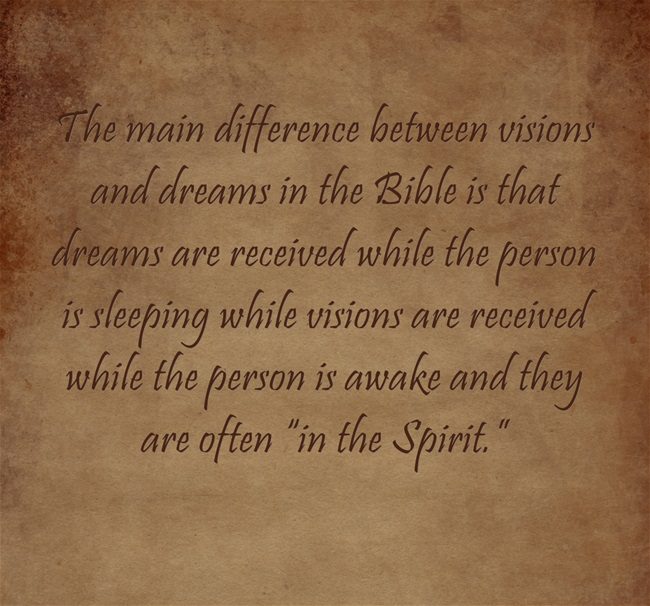 I have dreams.  I have dreamt of what heaven will be like and I have even dreamt of what hell must be like but when these dreams of mine are not what I see revealed in the Bible, then I cannot make anything out of them.  I have never had a vision but I have had many dreams but these dreams of mine often make no sense and where they are not in agreement with Scriptures, I just take them for what they are; random occurrences that have no true meaning or purpose.

September 13, 2014
What is the Difference Between Jealousy and Envy in the Bible?
Next Post