Is There Biblical Reasons for Christians to be Vegetarians?

Is There Biblical Reasons for Christians to be Vegetarians? September 14, 2014 Jack Wellman

Many Christians are eating a vegetarian diet?  Is it solely for health reasons?  Are there biblical reasons to be a vegetarian?

Was Jesus a Vegetarian?

Certainly, there is sufficient evidence that Jesus was not a vegetarian because He ate fish (Luke 24:42-43) and it would seem strange if He were because He multiplied both bread and fish when He fed the five thousand plus (Matt 14:17-21).  In the beginning, God gave mankind permission to eat meat (Gen 9:2-3) and Jesus Himself declared all foods as clean and acceptable to eat (Mark 7:19) so God did not intend for mankind to abstain from meat and eat only vegetables but many Christians are eating a vegetarian diet.  That diet includes no dairy products and no meats of any kind including poultry, eggs, and seafood.  Is that biblical or is it simply a choice that they are making? 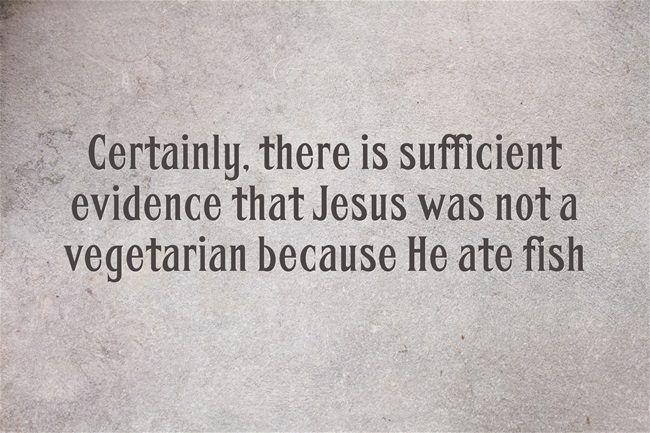 Paul dealt with all kinds of fanaticism regarding people’s diet.  He declared in Colossians 2:16-17 “Therefore let no one pass judgment on you in questions of food and drink, or with regard to a festival or a new moon or a Sabbath. These are a shadow of the things to come, but the substance belongs to Christ.”  Since Paul wrote so much about foods it appears that many of the believers, perhaps the Jews, were upset by what the Gentiles were eating, therefore he wrote again in Romans 14:1-4 saying “As for the one who is weak in faith, welcome him, but not to quarrel over opinions.  One person believes he may eat anything, while the weak person eats only vegetables. Let not the one who eats despise the one who abstains, and let not the one who abstains pass judgment on the one who eats, for God has welcomed him.  Who are you to pass judgment on the servant of another? It is before his own master that he stands or falls. And he will be upheld, for the Lord is able to make him stand.”  Paul tells believers in Rome to stop judging one another over something that is non-essential. They were despising those who ate meats, possibly even what the Jews considered as unclean, while others despised those who abstained from certain foods.  What they were doing was passing judgment on others for what they ate and others for what they didn’t eat.  Some denominations are still getting hung up on this by confusing their congregants by teaching that part of the Mosaic Law are still in effect, although clearly Jesus has nailed these laws to the cross. Every one of us will have to stand and give an account before God and it won’t be before other believers and Christ is not interested in whether we eat meat, including pork or certain types of seafood.  He is only interested in how we have lived after we became Christian and whether we are living holy lives that don’t bring shame to the cause of Christ.

Paul was not yet finished with the Christians at Rome about food and drink as he wrote in Romans 14:5-8 “One person esteems one day as better than another, while another esteems all days alike. Each one should be fully convinced in his own mind.  The one who observes the day, observes it in honor of the Lord. The one who eats, eats in honor of the Lord, since he gives thanks to God, while the one who abstains, abstains in honor of the Lord and gives thanks to God.  For none of us lives to himself, and none of us dies to himself.  For if we live, we live to the Lord, and if we die, we die to the Lord. So then, whether we live or whether we die, we are the Lord’s.” The point Paul was making was that if we are convinced in our own mind…by our own conscience, that’s all we have to be concerned with.  The important issue is whether we are thankful for what we receive, not what we are eating.  That’s why Paul asked, “Why do you pass judgment on your brother? Or you, why do you despise your brother? For we will all stand before the judgment seat of God” (Rom 14:10).  We should not ever pass judgment on others for what they eat or what days they observe because if they are convinced in their own mind that it’s not sin, that’s all that matters and it is none of our business.

All for the Glory of God

Here again Paul reminds believers, this time in Corinth, that “All things are lawful, but not all things are helpful. All things are lawful, but not all things build up.  Let no one seek his own good, but the good of his neighbor.  Eat whatever is sold in the meat market without raising any question on the ground of conscience.  For “the earth is the Lord’s, and the fullness thereof.”  If one of the unbelievers invites you to dinner and you are disposed to go, eat whatever is set before you without raising any question on the ground of conscience.  But if someone says to you, “This has been offered in sacrifice,” then do not eat it, for the sake of the one who informed you, and for the sake of conscience” (1 Cor 10:23-28). For example, if someone has or had a problem with alcohol at one time, the last thing the host needs to do is to serve wine.  If they have invited a Jewish or a Muslim family to dinner, they can needlessly cause an offense by offering baked ham as the main dish.  Christians should be sensitive to the customs or preferences of others as an act of love, even if it means skipping one of their own favorite dishes.  Paul summarizes his point by saying “whether you eat or drink, or whatever you do, do all to the glory of God [and] give no offense to Jews or to Greeks or to the church of God” (I Cor 10:31-32).

We should not put any unnecessary stumbling blocks of offense before others, neither should we cause others to stumble and we should not be passing judgment on others just because of what they eat or drink.  They are the ones who will have to stand before Christ to give an account and I doubt very much if Jesus will ask you or me what we think about what they ate and drank!  Yes, John the Baptist was a vegetarian by eating only locusts and honey but that was John (Matt 3:4) and some claim that before the flood, there was no record of mankind eating flesh but does that really matter?  If believers want to eat a vegetarian diet, let them do it without our judging then and those who eat meat, poultry, eggs, fish, dairy products and even a ham sandwich, so what?  That’s none of our concern.  The Bible nowhere commands Christians to be vegetarians but neither does it restrict anyone from doing so. Whatever we eat or drink, we all must do it to the glory of God. Nothing else matters.